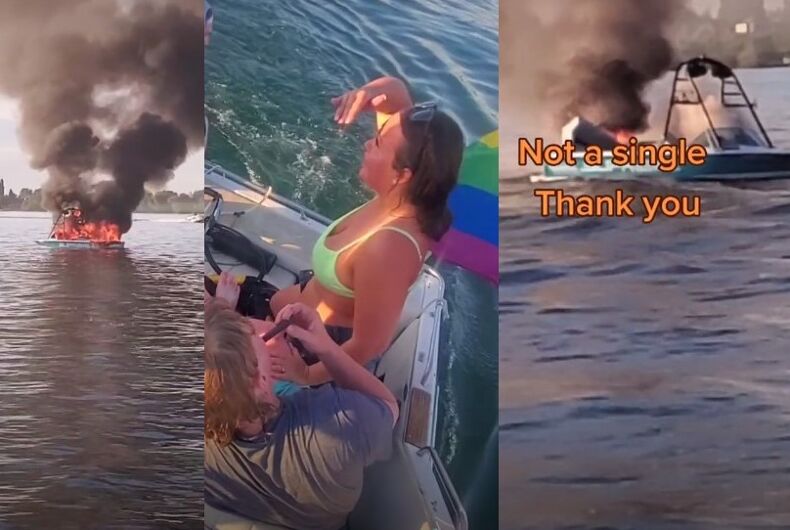 One of the passengers was wailing as her boat burned. Then she tried to get away from the LGBTQ people who saved her as fast as possible.Photo: Screenshot/TikTok

New video shows a Pride flag-waving family saving three people in a lake who were just harassing them and shouting anti-gay slurs at them. And the homophobes didn’t even have the decency to say “thank you.”

Earlier this week, video went viral of three people in a boat who were harassing a family flying a rainbow flag when their boat caught fire as the “instant karma” caught the internet’s attention.

“These people harassed my family because we were flying gay pride flags in Moses Lake, Washington, by racing around us and shouting gay slurs,” said Twitter user @retro_ushi_. “Then, their boat literally blew up!”

New video posted to the same TikTok account manages to paint the bullies in an even worse light, as they show no remorse for harassing the LGBTQ family and then demand to be saved and chauffeured to their friends’ boat.

“I mean they hated you until they need help,” said someone on the rainbow flag boat as they moved to save the swimming bullies.

“You guys OK?” they shout at them.

“No, we’re not. It’s burning!” one of the bullies replies from the water. They appear too upset to even say whether they have major injuries.

The three bullies get into the rainbow flag boat and watch as their own boat burns. The woman who flipped them off moments earlier is crying loudly.

“Not a single thank you,” text on the video says.

Another of the bullies tries to calm the one who is crying very loudly. “Baby, stop, we’re alive, we’re OK.”

“STOP! Those are our friends,” the bullies shout as they see another boat of people they know and want to go to their boat.

“Go home, bitches, I swear to God,” one of the people in the rainbow boat says.

Later, they’re explaining what happened to another person as the friends’ boat drives off.

“They came out and did a bunch of circle around us to stir up the water on us,” one person says. “Because we have a gay flag.”

“Then we saved their ass,” added another person.

Here is the new video, which has been viewed nearly one million times on TikTok.

Here’s the original video of the explosion, which has been viewed almost 10 million times on TikTok.

We safely got them out of the water immediately. We were nicer than they were. #pride #lgbtq #boat #Fail #Karma #Gay #hate #sorrynotsorry