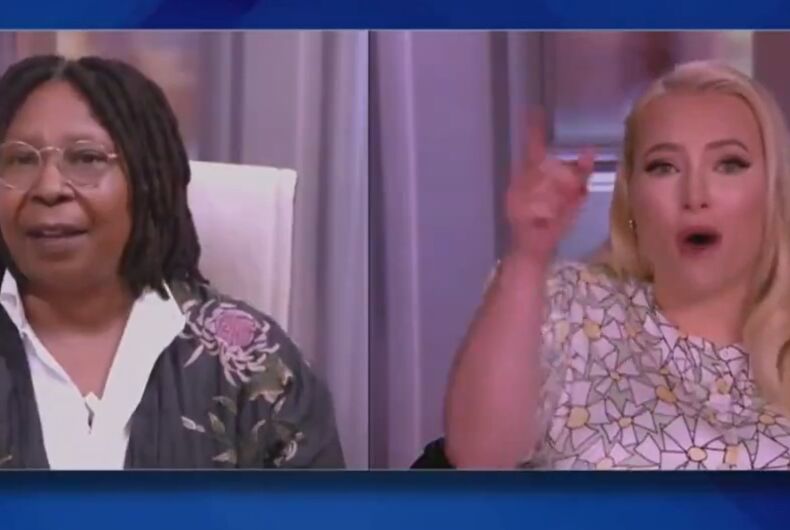 Meghan McCain threw a temper tantrum on The View, cutting off Whoopi Goldberg and talking over her… as she argued that President Joe Biden isn’t polite enough.

“With all due respect, I don’t care,” she said, cutting Whoopi off.

The women of The View were talking about how Biden apologized to CNN’s Kaitlan Collins for snapping at her when she tried to put words in his mouth in a question about Russian leader Vladimir Putin.

“I shouldn’t have been such a wise guy with the last answer I gave,” Biden later said as he left Geneva on Air Force.

On The View, several of the hosts said that it was good that Biden apologized for his tone, but McCain said that Biden’s rude answer and apology were “very Trumpy behavior.”

She said Biden was “unbecoming and ridiculous” and that his comments were worse than her co-hosts were willing do admit because he made them “in a foreign country.” She said that Biden has “gotten a pass so far” from the press.

“To just comment on that, yeah, the thing that I never saw Trump do was apologize to anybody, and I will take it,” Whoopi started to respond, but McCain started to talk over her.

“Let me just finish what I’m saying-” Whoopi tried to get in.

“With all due respect, I don’t care if he’s apologizing,” McCain said.

“I don’t care that you don’t care,” Whoopi said, getting heated. “Just hear what I’m saying.”

Whoopi started to say that they were going to commercial but put up her hands, clearly frustrated.

“You know, well, good, Meghan. You can be how you always are,” she said.

“You can be how you always are!” McCain said, determined to get the last word in.

Meghan McCain: "I don't care that you don't care! We're even!"

Whoopi: "Well, good, Meghan. You can be how you always are."

Meghan: "You can be how you always are!" pic.twitter.com/p0waUKoPTX

On Twitter, fans of the show had some choice words for McCain.

Not sure why people keep tuning in to watch a nobody like Meghan McCain disrespect Whoopi Goldberg the way she does, but I'm glad I don't watch that shit.

Meghan McCain needs to be fired from #TheView. She is so disrespectful towards her co-hosts, especially Whoopi.

Every day Meghan McCain, daughter of a senator and heiress of the Anheuser-Busch fortune, goes on TV and tells Whoopi and Sunny, who both grew up in the projects, how elitist they are.