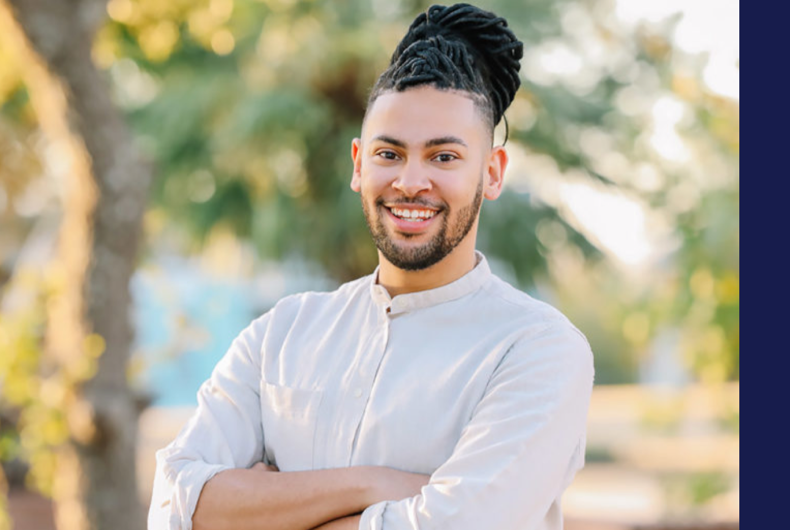 Jalen McKee-Rodriguez is being named the winner of a runoff election for the District 2 city council seat in San Antonio, Texas. He has what is being considered an insurmountable lead over Jada Andrews-Sullivan, the incumbent city councilwoman who he formerly worked for.

According to the Victory Fund, which has declared him as the winner, McKee-Rodriguez is the first out Black man to win election to an office in Texas state history.

ABC affiliate KSAT.com and CBS affiliate KENS5 have called the race for McKee-Rodriguez. Andrews-Sullivan also expressed recognition of her defeat in a text message to media reporters, although she did not call her opponent or formally concede.

McKee-Rodriguez used to work for her as the district’s communications assistant, then Director of Communications, but quit in 2019 after he says he faced anti-gay discrimination and harassment. He formally filed a complaint with the city against Andrews-Sullivan’s chief of staff, Lou Miller, in October 2019.

Afterwards, McKee-Rodriguez said he faced “retaliation,” was given “unrealistic and impossible expectations and deadlines” and “an increasingly hostile environment which involved isolation and prohibition from doing duties necessary to my job.”

Some of McKee-Rodriguez’s former co-workers backed his claim up. Andrews-Sullivan admitted that the management of her staff had led to unresolved issues, but she denied the problems in the office were targeted or due to McKee-Rodriguez’s identity.

McKee-Rodriguez also said that religious leaders that endorsed Andrews-Sullivan had held conversations with constituents, “telling their congregants that a vote for me is a sin,” just last week. Many pastors denied that anyone made such an accusation.

This is just early vote. pic.twitter.com/Xo5NOkGrm8

McKee-Rodriguez, 26, is a mathematics teacher (called “Mr. Mr” by his student for short) who just completed his third school year. He campaigned for both the general and the runoff elections while maintaining his day job at James Madison High School because, according to him, “the system is set up to prevent people like me from running for office.”

He runs the website theloserteacher.com, where he shares learning resources such as memes combined with mathematical theory. He also shared mutual aid, COVID-19 resources, and emergency resource guide for constituents on his campaign website.

“As a teacher, I prepare my students for the world,” his campaign website reads. “If elected, I can prepare the world for my students.”

McKee-Rodriguez was the most supported candidate at the May 1 general election, but did not get above the 50 percent threshold in a race that fielded 12 candidates. McKee-Rodriguez led the field with 26 percent, and advanced to the runoff with Andrews-Sullivan, who was second with 17 percent.

Even though he led in the general election, McKee-Rodriguez was not favored by many in his runoff against Andrews-Sullivan.

One report featured the opinion of political strategist Colin Strothers, who suggested that the newcomer wouldn’t fair well because “an older, largely African-American electorate may be less likely to usher a young, gay candidate into office.”

“My bet is that District 2 is ready,” McKee-Rodriguez responded.

I’m a bit disappointed in this take.

Our District won’t settle. We are ready for quality leadership and if that leadership takes the form of a young, gay candidate like me, my bet is that District 2 is ready.

Help me prove it by contributing at https://t.co/b307Mst7HK ☀️ pic.twitter.com/bQMxPaHx4n

McKee-Rodriguez said in an interview that he’s an introvert but had to get used to seeing or hearing himself in media coverage, because of “the significance of my voice and what I use it for.”

“I think that me running a race in and of itself is groundbreaking and history making,” he added, “but the probability and the possibility that we’ll win? I can’t even think about what kind of social change that might be able to bring…and the representation that is being created.”

McKee-Rodriguez was previously a local activist and board member on the Stonewall Democrats of San Antonio. His first job was at the age of 15 as a supervised classroom custodian.

The Victory Fund, which had awarded McKee-Rodriguez the special designation of being a “Spotlight Candidate” in need of extensive resources and support, celebrated his expected election in a statement on June 5.

“Jalen shattered a lavender ceiling in Texas, and it came as right-wing state legislators target LGBTQ people and people of color with bigoted policies aimed at rallying their extremist political base,” President & CEO Annise Parker, said.

“We need more people of color, young people and LGBTQ people in state and local government who will ensure politicians look to improve the lives of Texans, not further marginalize them. Jalen’s victory is a rejection of the homophobic and racist politicking so fashionable in Austin and it will inspire more LGBTQ Black leaders to run and win.”

McKee-Rodriguez will serve on the San Antonio City Council for a two-year term once his victory is certified. 10 Councilmembers are elected as non-partisan candidates and manage San Antonio using a council-manager government, with the separately-elected mayor having the 11th vote, but a city manager being appointed by the council to serve as the city’s chief executive.

In addition to the Victory Fund, McKee-Rodriguez was supported by the Run For Something PAC, the San Antonio DSA chapter, Grassroots Law Project, and the Texas Organizing Project. He was also endorsed by former San Antonio mayor Julian Castro, Rep. Joaquin Castro (D-TX), and Texas rapper Bun B.