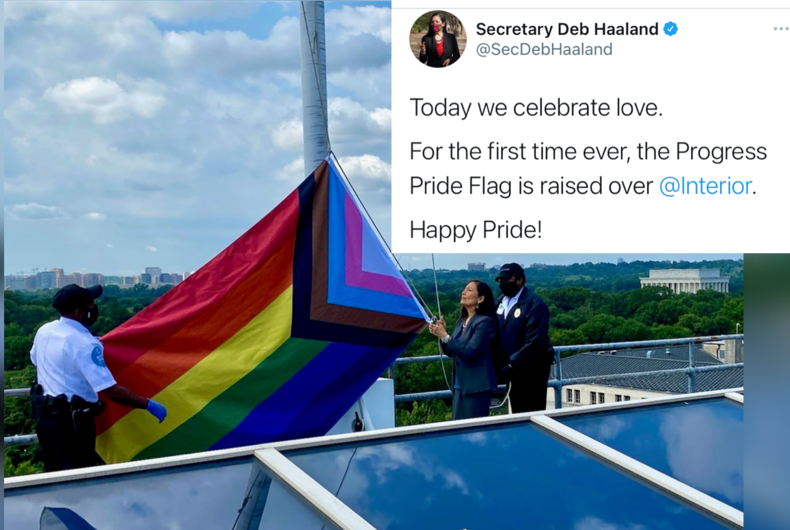 Interior Secretary Deb Haaland recognized Flag Day on June 14 by raising the Progress Pride flag over the Department of the Interior headquarters in Washington, D.C. It is reportedly the first time any Pride flag was waved on department property in its 172-year history.

Related: Dr. Alicia Mousseau is the first out person on the Oglala Sioux Tribe’s executive council

“For the first time ever, the Progress Pride Flag is raised over Interior,” she said, including a picture of her and security as they sent the flag up. “Happy Pride!”

In a statement, Secretary Haaland said, “The Department of the Interior is committed to telling the rich, diverse story of America and lifting up underrepresented peoples and communities. Despite many hard-fought victories, there is still a long way to go to ensure full liberation, peace, and equality for the LGBTQ+ community.

“Justice and equality for LGBTQ+ people is more than just a policy issue for me; it’s personal,” Haaland added. “I am fully committed to making the Interior Department a leader on inclusion and equity and to ensuring our decisions are informed by and centered around the voices of a diverse American public.”

For the first time ever, the Progress Pride Flag is raised over @Interior.

The decision to raise the flag over the Department has become evidence of a notable contrast between Haaland and her Trump-appointed predecessors.

Ryan Zinke, who served as the Interior Secretary from 2017 until 2019, had his own special flag representing the Secretary of the Interior — only in use ceremonially before the 1940s — raised and lowered any time he entered or exited the Department’s headquarters. He also wanted to redesign his flag and the department’s flags so they would not be smaller than the American flag.

He then refused requests to allow the Pride flag to fly over the Stonewall Inn, which is a national monument and thus regulated by the Interior’s National Park Service. Reports indicated that he also told several Interior employees several times that “diversity doesn’t matter” to him, and he believed “we don’t need to focus on that anymore.”

Zinke’s daughter, Jennifer Detlefsen, a veteran, made a point of criticizing the Trump administration after he announced the ban on trans people from serving in the military.

After he resigned, his deputy David Bernhardt took over, being officially sworn in by April 2019.

In December, HuffPost reported that “sexual orientation” was removed from anti-discrimination language in the Interior Department’s guide on ethics, although officials claimed it didn’t mark an actual change in policy.

80 organizations lobbied the officials taking over for the Trump administration to reinstate the anti-discrimination protections because it would have “have a chilling effect on LGBTQ people applying for jobs at DOI ― and it betrays current Interior Department employees.” It is not clear if the change has been made.

The decision also contrasts other federal agencies under the purview of the Biden administration. While the State Department is permitting embassies around the world to fly Pride flags, the Pentagon is continuing a ban enacted by the Defense Department under Trump which will prevent any Pride flags on military property.

While Haaland’s decision to wave the flag is being praised, it is also being criticized by the religious right and reported by far-right outlets as in defiance of President Biden’s order to wave the American flag on Flag Day.

Haaland was previously a U.S. Representative representing New Mexico. Rep. Melanie Stansbury (D-NM) was sworn in as her replacement yesterday as well, after winning a special election in April.

Haaland and Rep. Sharice Davids (D-KS), who is out, were the first two Native American women elected to Congress in 2018. She also chaired the New Mexico Democratic Party and worked for Barack Obama’s 2012 reelection campaign.

This is beautiful but also powerful! Grateful to see this sign of solidarity as we celebrate #pride. ❤🧡💛💚💙💜https://t.co/LncntizjKZ

What a great day! Thank you @SecDebHaaland! https://t.co/P6invBE8rf

The U.S. Department of the Interior is different from what other countries’ “interior” officials do. While those officials are typically in charge of a state’s domestic regulations, public affairs, and security, those tasks generally fall under other agencies such as the Department of Homeland Security and Department of State in the United States.

The Interior Department primarily focuses on preserving and overseeing federally-owned land, but it also oversees the Department of Indian Affairs and many other agencies responsible for policies dealing with Indigenous tribes, people, and land.

Haaland is the second Indigenous person to serve in the Presidential cabinet and join the Presidential line of succession. Vice President Charles Curtis, who served from 1929 to 1933 in the Hoover administration, is the only other Indigenous American who has done so. He was a Kaw citizen born in the former Kansas territory.

Under Haaland’s guidance, the Interior Department has celebrated Pride Month online all month. Now they are celebrating physically as well.

From Oscar Wilde’s visit to the island in 1882, to the development of Cherry Grove as “America's First Gay and Lesbian Town,” @FireIslandNPS has long been a home to LGBTQ+ visitors and residents.