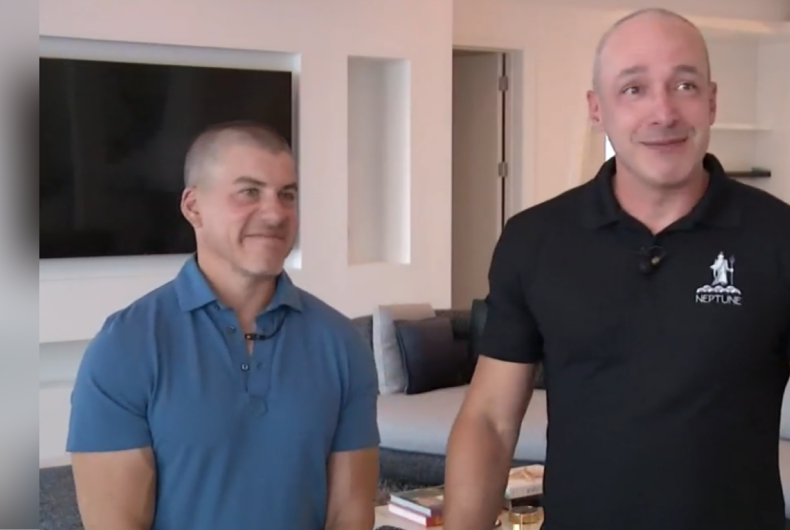 Gary Hess (left) and Trevor Burgess have contributed more than $250,000 to the St. Petersburg community, including toward Equality Florida.Photo: Screenshot/Bay News 9

Trevor Burgess and Gary Hess met 25 years ago at a Pride celebration. “We were at a Pride block party in Boston. I saw him across a crowded room and the rest was history,” Hess recalled.

Then, Burgess had just graduated from Dartmouth College. Now, Burgess is the founder of C1 Bank, which became C1 Financial, and he and Hess are married with a child named Logan.

Burgess became the first out CEO of a publicly traded financial institution when C1 Financial went public in August 2014. He left the company in 2016 with a reported $31 million worth of shares and over $5 million in a departure agreement.

“We’ve built, together, two successful businesses in St. Petersburg and we decided we wanted to give back to our community,” Burgess told Bay News 9. “So we picked 10 organizations, many that we have worked with before and some that are in special need right now, and decided that we would make 10 $25,000 gifts.”

“We decided that we wanted to share this story to encourage others to contribute at such a time of need as we recover from COVID,” he shared.

“These ten gifts totaling $250,000 are our way of saying thank you, and to celebrate our love with St. Pete,” Burgess wrote when announcing the donations.

“Please join us in supporting these amazing organizations or one of many other highly deserving charities that help the social fabric of our communities.”

Equality Florida, a LGBTQ advocacy organization currently working against the anti-LGBTQ policies being enacted under the administration of Gov. Ron DeSantis (R), expressed their gratitude for the contribution.

“[Gary and Trevor] are thoughtful donors who look to support the most vulnerable and they give at a level that has game-changing impacts,” Nadine Smith, Equality Florida’s Executive Director, said in a statement.

The head of the Carter G. Woodson African American Museum also publicly expressed her appreciation for Burgess and Hess.

“We find ourselves in the middle of a capital campaign where we’re working feverishly in order to ensure the necessary funding to build a proper African American museum in the city of St. Petersburg,” Terri Lispey Scott said to Bay News 9.

“It moved us beyond measure.”

This is far from the couple’s first time supporting those in need. Last summer, during the height of the pandemic, Burgess and Hess donated at least 10,000 masks to the city of St. Petersburg. They then implored local residents to donate and share 10,000 more. Mayor Rick Kriseman (D) praised their contributions.

They also helped give free Google Chromebooks to every student at the St. Petersburg Prep Academy.

Thank you to my friends Trevor Burgess and Gary Hess for their generosity, purchasing 10,000 of these @StPeteFL – branded masks. They've arrived and we will be getting them on the streets shortly. #RestartStPete pic.twitter.com/4oag3gLMRE

Burgess and Hess hope their contribution will encourage others to give if they can during Pride Month and beyond.

“Pick the organization that really speaks to you,” Burgess implored. “These were 10 organizations that made sense to us, but there may be something that you’re really passionate about. And giving as little as $5 a month or a one-time gift can make a big difference for that institution over time.”

A gay couple endured years of anonymous hate mail. Then they found out who was sending it.