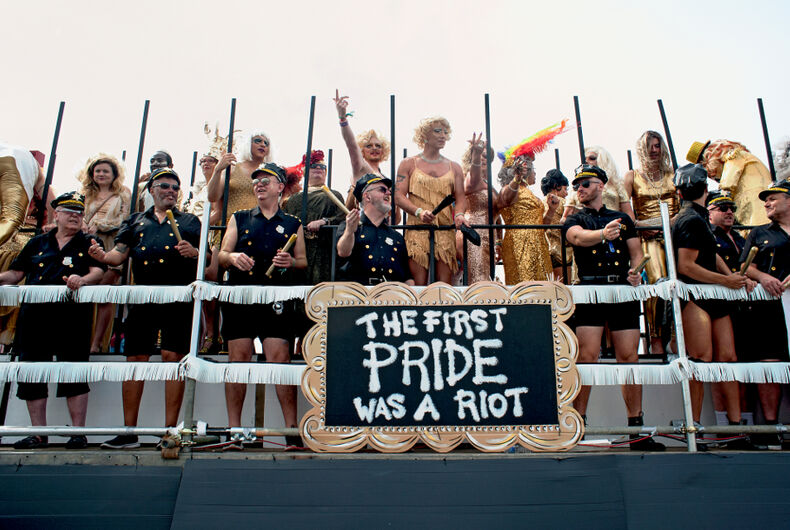 Brighton and Hove, August, 2019: Celebrants commemorate the 50th anniversary of the Stonewall Riots at the Pride Parade on the Brighton seafront.Photo: Shutterstock

As we begin our annual commemorations of Pride Month this June, I hope we remember that Stonewall was a riot and not a corporate-sponsored capitalist festival to hawk our tacky products of blatant consumption in what I refer to as “the tchotchketification of a movement” (“tchotchke” in Yiddish means knick knacks, small objects, etc.).

In our communities, Pride marches of the past have morphed into parades and festivals funded on a base of major corporate sponsorship and capitalist consumption. Parade contingents now include large canvas banners affixed with familiar logos of national and local banks, insurance, soft drinks and beer, and real estate companies.

Ironically, some of these same companies not so long ago refused to sell to or hire “out” members of our communities but seeing how our business would improve their economic bottom line, we are now happily welcomed.

Along the parade routes and at rally sites, companies and individuals display and sell their wares, from internet and phone company subscriptions to rainbow colored everything imaginable: from T-shirts to teething rings and towels, to toilet seat covers, cock rings, and dildoes.

Merchants and artisans misappropriate the pink triangle — the Nazi patch gay men were forced to wear on their clothing when incarcerated in concentration death camps — to fashion glimmering pink Rhinestone jewelry worn as glamorous fashion accessories.

While some benefits accrue to our greater visibility in the corporate world by helping to overcome many of the stereotypes and reducing prejudices, the capitalist system seems to have employed these images of “we are just like you” in its attempts to coopt critique and possible challenge to that very system.

We rioted to reject the status quo

There are moments in history when conditions come together to create the impetus for great social change. Many historians and activists place the beginning of the modern movement for lesbian, gay, bisexual, and trans equality at the Stonewall Inn, a small bar frequented by trans people, lesbians, bisexuals, gay men, students, and others of all races located at 53 Christopher Street in New York City’s Greenwich Village.

At approximately one-twenty on the morning of June 28, 1969, New York City Police officers conducted a routine raid on the bar on the charge that the owners had been selling alcohol without a license. Feeling they had been harassed far too long, people challenged police officers on this morning lasting with varying intensity over the next five nights by flinging bottles, rocks, bricks, trash cans, and parking meters used at battering rams.

Even before these historic events at the Stonewall Inn, an action preceded Stonewall by nearly three years, and should more likely be considered as the founding event for the modern LGBTQ movement.

Out of the ashes of Compton’s Cafeteria and the Stonewall Inn, people, primarily young, formed several militant groups. One of the first was the Gay Liberation Front. GLF was not a formalized organization per se, but rather a series of small groups across the U.S. and other countries.

GLF meetings took place in people’s living rooms, basements in progressive houses of worship, and storefronts. Members insisted on the freedom to explore new ways of living as part of a radical project of social transformation and liberation.

GLF adopted a set of principles emphasizing coalition-building with other disenfranchised groups — women, minoritized racial and ethnic groups, working-class people, young people, elders, people with disabilities — as a means of dismantling the economic and social structures we considered inherently oppressive.

During the early 1970s, I was an active member of GLF in Washington D.C. We held meetings at Grace Church, the Washington Free Clinic in Georgetown, and All Souls Church on 16th Street, and we rented a brownstone on S Street in Northwest D.C. for the establishment of a GLF living collective. Meetings provided a space for us to come together and put into practice what feminists had taught us — that the “personal is the political.”

We laughed and we cried together. We shared our ideas and our most intimate secrets. We dreamed our dreams and laid our plans for a world free from all the deadly forms of oppression, and as we went along, invented new ways of relating.

For those identified as male, we came to consciousness of how we had been stifled as males growing up in a culture that taught us to hate the feminine within, that taught us that if we were to be considered worthy, we must be athletic, independent, assertive, domineering, competitive, and that we must bury our emotions deep within the recesses of our souls.

What is the prize?

When we consider the phrase, “Keep your eyes on the prize,” I now wonder what we consider precisely as the prize, the goals, that we are working toward as a larger movement?

Are we working under the vision of Stonewall of “a radical project of social transformation and liberation” and “dismantling the economic and social structures they considered inherently oppressive?”

Or are we working to reform the current social system to assimilate and to gain rights to privacy and other basic rights? Or none of the above?  I am sure each of us will have a different answer.

Looking back over the years, as our visibility has increased, as our place within the culture has become somewhat more assured, much certainly has been gained, but also, something very precious has been lost.

That early excitement, that desire — though by no means the ability — to fully restructure the culture, as distinguished from our mere reform, seems now to lay dormant in many sectors of our communities.

In our current so-called “neoliberal” age, emphasis is placed on privatization, global capital, lifting all restrictions on a “free market” competitive capitalist system, reduced governmental oversight and deregulation on all sectors, attacks on labor organizing, and in practice, further expanding the income and wealth gaps.

We are living in an environment in which property rights hold precedence over human rights. In this environment, we are witnessing a cultural war waged by the political, corporate, and Christian theocratic right, a war to turn back all the gains progressive people have made over the years.

Within this environment and previously, however, I perceive four main themes as the major focus of some of the larger lesbian, gay, and bisexual movement organizations, what I am calling the “4 Ms” of the mainstream LGB movement.

I do not include here trans identities because, firstly, I cannot discern a “mainstream” trans movement, and secondly, the 4 Ms in their current LGB mainstream construction exclude trans people.

According to my colleague, Chase Catalano, “The silencing of trans experiences often reminds me of how folks in leather, drag queens, and dykes on bikes were viewed with contempt when they wanted to be included in the early Pride events for being too contentious (folks didn’t want ‘those people’ getting the media attention from the ‘normal people’).”

The four themes of the LGB movement comprise an assimilationist / reformist rather than a social transformational impetus. These Ms are: 1. Marriage Equality, 2. Military Inclusion, 3. Media Visibility, and 4. Making Money.

While the “4 Ms” are all laudable goals, I believe that if we are going to achieve a truly equitable society, we must reach higher, wider, and broader. As important as these goals may be, I hope we do not envision them as the final resting place over the rainbow.

What good is winning if we don’t like the prize?

If we do rest here, after having been seduced by promises of achieving some degree of credibility and respectability in the capitalist system or being thrown some basic human rights and hate crimes laws, I fear we will have become part of the very problems that so many of us have fought so tirelessly to eradicate.

What good is military inclusion when the military invades other countries on the pretext of seeking out “weapons of mass destruction,” but serves instead the interests of corporations while killing hundreds of thousands of civilian non-combatants?

What good is media visibility when media outlets serve corporations to siphon our dollars into their coffers?

What good is making money when trans people, primarily of color, face brutal attacks and murder every day for living their truths?

I do remain hopeful, however. The increasing visibility and recognition of trans people and of the emerging discourse of Critical Trans Politics and Critical Race Theory today has shaken traditionally dichotomous notions of gender and race, and in turn, other stifling hierarchies and binaries, which are the very cornerstones for the entrenchment keeping our society from moving forward.

Their critical stories and experiences have great potential to bring us into the future — a future in which anyone on racial and gender spectrums everywhere will live freely, unencumbered by social taboos and cultural norms of gender and race.

It is a future in which the “feminine,” “masculine,” “non-binary” — as well as all the qualities on the continuum — can live and prosper in us all. It is a future where the “single story” no longer achieves priority, and counter-stories challenge dominant hegemonic ideologies.

Metaphorically, oppression operates like a wheel with many spokes. The rim of that wheel is composed of intrinsically connected strands of patriarchy, Christian hegemony, and white supremacy.

If we work to dismantle only one or a few specific spokes, the wheel will continue to roll over people. Let us, then, also work on dismantling the very rim of that wheel as well as all the many spokes to conquer all forms of oppression and the connective tissue holding it together.

I believe also that sexual and relational attractions and gender identities and expressions alone are not sufficient to connect a community, and by extension, a movement for progressive social change.

We must, therefore, look beyond ourselves and base a community and a movement not simply on social identities, but also on shared ideas, ideals, visions, and values among individuals from disparate social identities, with like minds, political philosophies, and strategies for achieving their objectives.

Let us revel in our past victories, for we have fought tirelessly for them. But let us not dwell here because we have further to go to ensure a truly just and equitable society and world.

In the final analysis, whenever anyone is diminished, we are all demeaned, when anyone or any group remains institutionally and socially subjugated, marginalized, excluded, or disenfranchised and prevented from being free to determine the course of their lives, the possibility for authentic community cannot be realized unless and until we become involved, to challenge, to question, and to act in truly transformational and liberatory ways.

Queer people more likely to be stopped by police