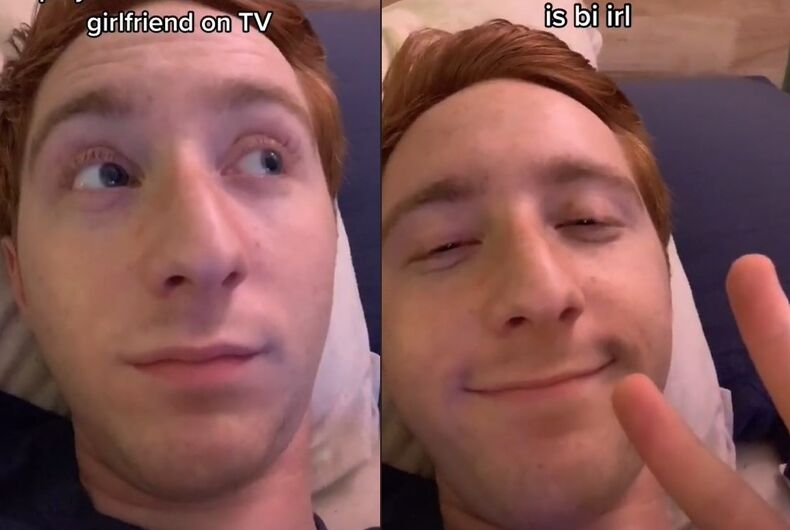 Actor Larry Saperstein came out in a video to fansPhoto: Screenshot/TikTok

Actor Larry Saperstein from the series High School Musical: The Musical: The Series came out as bisexual in a TikTok video for his fans at the start of Pride Month.

“plays a character with a girlfriend on TV… is bi [in real life],” the TikTok reads as a song about “the unexpected” plays.

“Is it really that unexpected tho,” the caption says.

is it really that unexpected tho #pride

“I have T minus 30 days to figure out how to do drag so I can turn out a look before the end of the month,” the 23-year-old joked in a tweet. “I love you ALL SO MUCH.”

Joshua Bassett, who plays Ricky Bowen in the same show as Saperstein, came out last month while gushing over Harry Styles.

“This is also my coming out video, I guess,” he said nervously, later saying on Twitter that he felt “shamed” about his sexuality all his life and that he’s still trying to understand it.

High School Musical: The Musical: The Series won the GLAAD Media Award in 2020 for Outstanding Kids & Family Programming, in part for its representation of a gay latino student Carlos, who is played by out actor Frankie A. Rodriguez.

“I think for Disney to take a chance like this, it’s very exciting. I can’t wait for [supportive fans] to actually see the show,” Rodriguez said in a 2019 interview.

Joseph Serafini, who plays Seb Matthew-Smith in the Glee-like series, said in a 2020 interview that he’s “bisexual, if I have to give a label” and is in a relationship with a man.

And Julia Lester, who plays Ashlyn Caswell on the show, is pansexual.

Pride in Pictures: Living the life that makes her happiest

Sophie Turner tells fans “Time isn’t straight & neither am I”