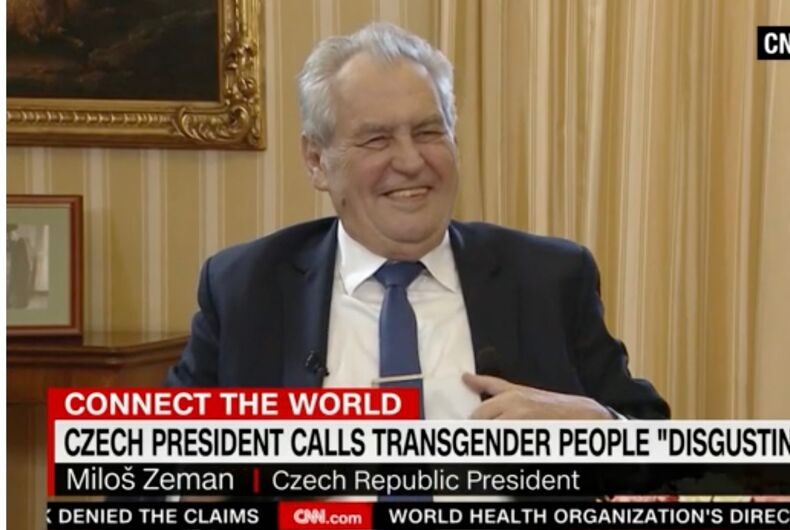 “If you undergo a sex-change operation you are basically committing a crime of self-harm,” Zeman said in the conversation with CNN Prima. “Every surgery is a risk and these transgender people to me are disgusting.”

His comment came during a discussion about a new and widely condemned anti-LGBTQ law passed in Hungry that bans LGBTQ content in schools and on television for children under eighteen. European Commission President Ursula von der Leyen announced she will be taking legal action against Hungary’s law, calling it “a shame.” In addition, 16 out of the EU’s 27 member states have publicly voiced opposition to the law.

The Czech Republic has not condemned the law. When Zeman made the transphobic comments, he was explaining why he supported Hungarian Prime Minister Victor Orbán. In the process, he also managed to slip in more boorish comments about women and LGBTQ people.

“Viktor Orbán says that he is not against homosexuals,” Zeman said, “but that he is against the manipulation not only of parents, but also of children in sex education.  I see no reason to disagree with him, because I am completely annoyed by the suffragettes, the Me Too movement and Prague Pride. ”

He also said that if were younger, he would organize a “protest of heterosexuals” in response to Prague Pride.

“There would be millions of us,” he said. “I would get trains and buses full of heterosexuals to come to Prague and show how absurd it is. It’s absurd to be protesting your intimate sexual preferences out in the public regardless of whether you’re a sexual minority or a majority. It’s a private matter, and it’s very intimate.”

A massive heterosexual protest would be absurd, of course, as they would have nothing to be protesting against, unlike the LGBTQ community.

According to BBC, the Czech Republic is one of the most “sexually liberal” of the countries that once belonged to the communist bloc, but as of late, the country has experienced increasingly hateful political discourse against the LGBTQ community.

In early June, the Czech Senate Committee on Foreign Affairs alleged that Zeman is “unfit for office,” claiming he is a threat to national security, and calling for his removal. The committee released a document alleging that he is “incapable of executing the responsibilities of his office, he is at times disoriented, fails to coordinate his actions with the government, undermines the country’s security and defense forces in performing their duties and generally acts in a way that is at odds with the oath of office that he took.”

Zeman was the first directly elected President of the Czech Republic and is also known for being extremely friendly with the Kremlin.