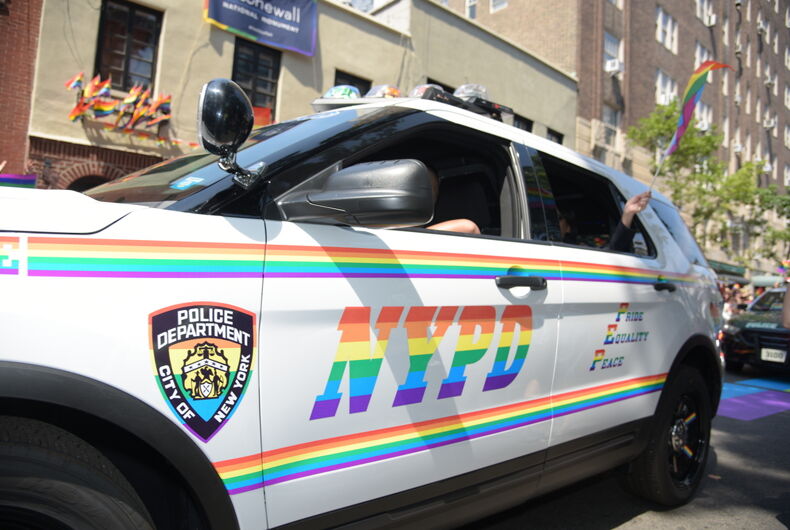 Over the weekend, the Boston’s second annual Trans Resistance March (TRM) and Rally took place. Noticeably missing in the march from Nubian Square in Roxbury to Franklin Park Playstead was the presence of police and law enforcement.

Numerous chants were heard along the route from marchers, revelers, and onlookers, bringing attention to many of the issues the Black transgender community confront specifically. One chant was, “No racist police!”

“We plan to have minimal, if any, contact with law enforcement. Police officers will not be invited to the event or asked to secure the march route,” organizers said. ‘We will not take direction from law enforcement unless there is a clear, legal, and reasonable explanation for doing so that does not impede our efforts to hold our event as planned.”

One of the issues causing tensions between Boston Pride, a 51-year-old predominately white corporate-sponsored board, and Trans Resistance, a 2-year-old racially mixed grassroots board, is over-policing.

“Police came with sticks, came ready to throw down,” Athena Vaughn shared with the public about hyper-policing of Blacks at last year’s first TRM. Vaughn is the founding president of Trans Resistance MA.

The historic and present-day patterns and models of policing and punishment stem from centuries of colonialism, slavery, segregation, and immigration. The over-policing of women of color is due to gang violence, the war on drugs, poverty, domestic violence, mental health, and the sex trade industry, especially trans women.

“At TRM, we recognize policing in all forms as rooted in anti-Blackness, (trans) misogynoir, and the systems of slavery and incarceration. As a collective that advocates for the safety and liberation of Black trans women first and foremost, we reject the notion that police “keep us safe” and refuse to work with them.”

For example, it is common to hear trans sisters relay their tales of being subjected to excessive police violence, viciously attacked by off-duty police officers, arrested, and charged with attempted murder for defending themselves. In addition, while in prison, many trans women are misgendered by correctional officers and inmates, repeatedly sexually assaulted, and denied access to gender-affirming healthcare.

Many sexual assaults go unreported because half of the top police departments in the U.S have no policies prohibiting police sexual violence against the public. And, to avoid being assaulted during “stop-and-frisk,” many women of color have been forced into sexual acts to stave off arrest.

Another chant heard along the march route was “No justice, no peace, because these are our streets.”

State Rep. Lindsay Sabadosa (D) introduced Massachusetts Bill HD2200 and, in collaboration with the #DecrimMA coalition, aims to do just that. Policies protecting transgender people from discrimination and increasing economic opportunity would, too.

“Picking back up on the decriminalization of sex work – criminalizing the purchase and sale of sex particularly harms our Black trans sisters in the sex trades, it lands them in prisons and jail bunks just for working to survive in a racial capitalist economy that harms all people, and especially Black, trans women!,” Elizabeth Ruckus of Boston, who live-streamed TRM wrote.

There is a difference between policing a community and protecting one, splitting the LGBTQ community along race, class and gender lines. Although LGBTQ police officers might serve as a middle ground between having police at Pride parades or not, many communities of color, particularly black communities – straight or queer – suffer from PTSD just seeing the police.

Sadly, the fear is not unfounded. Last June, researchers from Harvard T.H. Chan School of Public Health reported that African-Americans are 3.23 times more likely than white Americans to be killed by police.

LGBTQ civil rights and Black civil rights histories intersect on many issues, with violence and police brutality among them. It’s my hope that come next Pride, this one issue is resolved.

#TransMenAreMen is trending on Twitter & it couldn’t be more heartwarming

A troll tried to attack trans lawmaker Danica Roem online. It completely backfired on him.