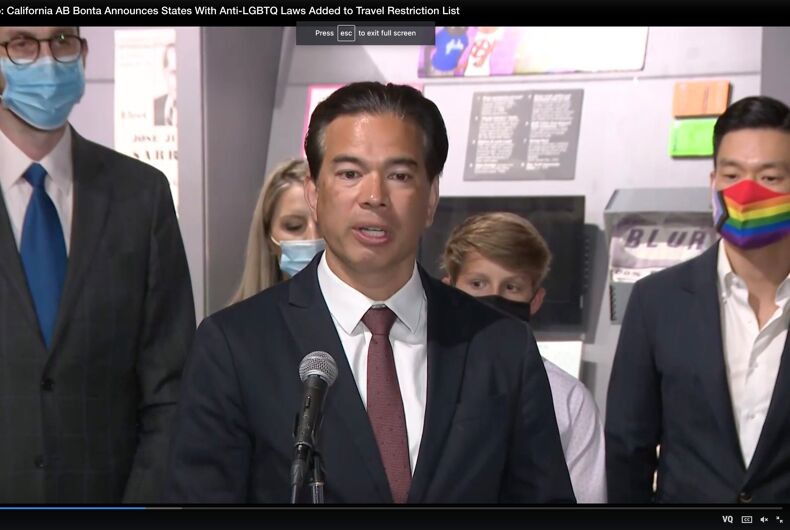 “Make no mistake: We’re in the midst of an unprecedented wave of bigotry and discrimination in this country — and the State of California is not going to support it,” Bonta said in his speech announcing the additions.

2021 has been a record year for anti-LGBTQ laws, many of which target transgender youth and seek to ban them from sports as well as limit their access to gender affirming healthcare.

“As of June there have been more than 250 anti-LGBTQ bills introduced in state legislatures across the country,” said Bonta, “at least 95 of them directly targeting transgender Americans. Many of these states are already on California’s travel restrictions list.”

The five states added this week have all enacted anti-LGBTQ laws within the last few months.

And in May, Montana enacted two anti-LGBTQ laws. House Bill 112 banned transgender youth from participating in sporting events under their gender identity, and Senate Bill 99 now requires schools to inform parents if they want to mention anything related to “human sexuality” in class, and only allows the instruction for students who “opt-in” to it and other lessons related to sex education.

Also in May, Arkansas passed H.B. 1570, the so-called “Arkansas Save Adolescents From Experimentation (SAFE) Act,” which bans doctors for providing gender-affirming care for transgender youth, including puberty blockers, which are not effective if taken as an adult because puberty has already permanently changed a person’s body at that point.

West Virginia enacted an anti-trans sports law in April.  H.B. 3293 says that in public schools all the way up to the collegiate level, the sports team on which a student plays must “be based on the biological sex of the athlete at birth.”

In his speech, Bonta said that these states “would rather demonize trans youth than focus on solving real issues like tackling gun violence beating back this pandemic and rebuilding our economy.”

“It’s my job to represent the interests of all Californians,” he added, “especially those who continue to be overlooked and unseen.”

He also explained that he is required by California law to enact travel restrictions to states with anti-LGBTQ legislation.

“It’s been 52 years to the day since the Stonewall Riots began,” he said, “but it’s abundantly clear that that same fight remains all too alive and well in this country. There is a coordinated attack against our fundamental civil rights.”