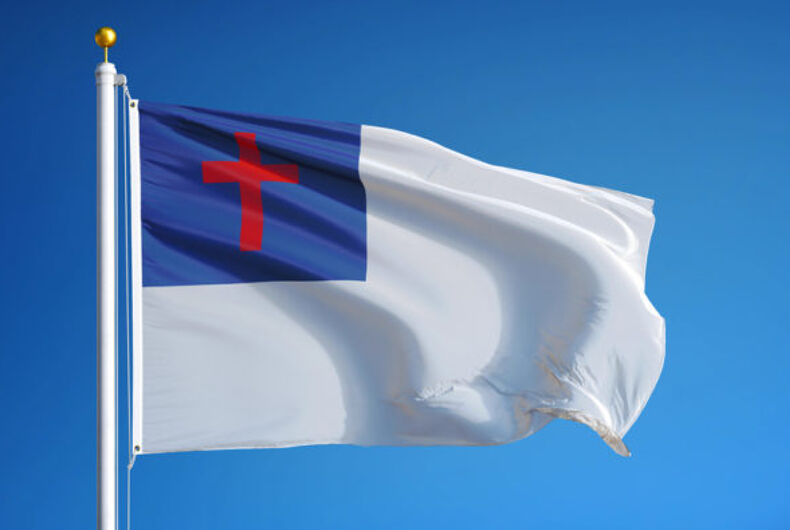 A Christian hate group who has spent years fighting a legal battle for the right to fly a Christian flag at Boston City Hall has now turned to the highest court in the nation.

Liberty Counsel, an anti-LGBTQ law firm that can be considered the religious right version of the ACLU, has been fighting on behalf of plaintiff Hal Shurtleff since 2017. The group claims the city of Boston illegally censored a private flag from being flown in a public forum because it was a Christian flag.

After losing more than once in lower courts, Liberty Counsel recently announced its last-ditch effort: filing a petition to the U.S. Supreme Court.

It all started when an organization called Camp Constitution applied and received a permit to hold a rally at Boston City Hall. The group also requested the ability to raise the Christian flag on the city’s flagpoles next to the American and city flags.

The group’s founder, Hal Shurtleff, wanted to “include short presentations by clergy members, a brief historical overview of Boston as “the city set on a hill,” and “the raising of the Christian Flag on one of the City Hall Plaza flagpoles” in the program according to an email Liberty Counsel sent to city leaders.

When the group was denied the permit to fly the flag, Property Management Commissioner Gregory Rooney told the organizer the city only allows secular flags to fly from city property.

Liberty Counsel has argued that the group has a right to fly the Christian flag because City Hall has flown flags like the Transgender Pride flag, the Juneteenth flag, and the rainbow Pride flag.

In 2018, U.S. District Judge Denise Casper shot down their claims.

The “primary purpose” of an event to raise a Christian flag “would be to convey government endorsement of a particular religion by displaying the Christian flag alongside that of the United States and the commonwealth in front of City Hall,” Casper wrote.

“Blowing in the wind, these side-by-side flags could quite literally become entangled.”

Casper found that the city’s rule against all religious flags was neutral and therefore permissible. She also shot down their arguments about the other flags that had been raised, explaining that none were of a religious nature.

“Plaintiffs also emphasize the City’s prior decisions to grant permission to private parties to raise the LGBT rainbow pride flag, transgender rights flag and the Juneteenth flag on the City flagpole,” the ruling says. “However, none of these flags are religious on their face.”

Liberty Counsel appealed and lost again in the First District Court. And now, they are banking on the Supreme Court to help them.

“Despite the clear evidence presented at trial,” says the announcement on the Liberty Counsel website that the firm filed their Supreme Court petition, “the First Circuit Court of Appeals sided with the city of Boston’s censorship of the Christian viewpoint on the public forum, a place designated as a ‘public forum’ by Boston’s written policy and confirmed by its unbroken practice during which it never censored private speech – until Camp Constitution’s application. The Court of Appeals expanded the government speech cases far beyond Supreme Court precedent.”