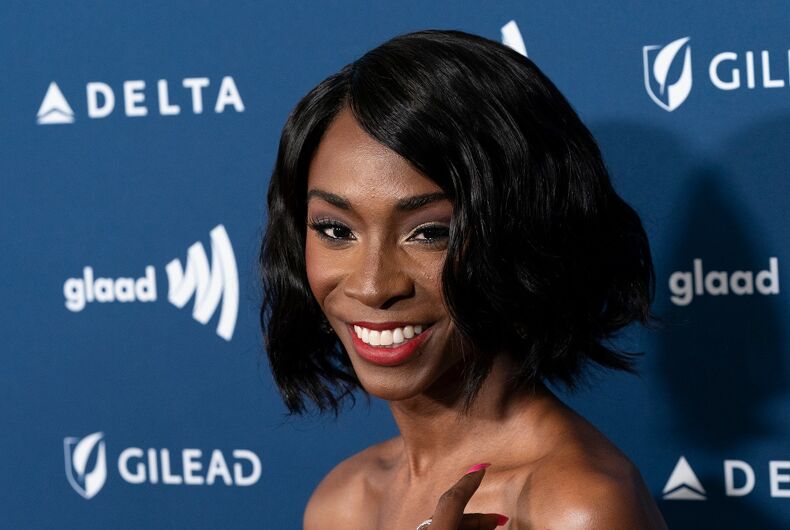 Pride Month is a great opportunity to diversify your social media feeds, which can help expand your awareness and knowledge of the LGBTQ+ community and the issues affecting those who are part of it.

It’s really important to celebrate and honor the work of Black trans women and the sacrifices they have made throughout history to make Pride what it is today. Black trans women continue to be unprotected and unheard, so it’s up to us to amplify their voices, support their work, and show them appreciation and love.

Here’s a list of Black trans women who are amazing activists and use social media to share their message and educate others on the realities of living as a trans person. Give them a follow!

Activist, model, DJ, and force for change Munroe Bergdorf uses her platform to draw attention to society’s injustices, particularly racism, white supremacy, and transphobia. She speaks from personal experience and is proof that resilience and power can bring about change.

After being hired as Loreal’s first transgender model in 2018, she was quickly dropped for speaking out about racism, specifically the Charlottesville riots. Fracas followed in the press. Three years later, Bergdorf was hired by the brand to work on their Diversity and Inclusion Advisory Board.

Munroe has modeled for the likes of Illamasqua, worked as a political LGBTQ+ advisor, created her own documentary, What Makes A Woman?, and is currently writing a book.

She is a remarkable woman who continues to fight for equality for people of all genders and races, despite often being on the receiving end of abuse. She utilizes her large social media following and speaks on TV to continue conversations surrounding gender and race, dispel harmful myths, and educate oppressors.

Ashlee Marie Preston is a media personality, journalist, and activist. She was the first trans woman to become editor-in-chief of a national publication, Wear Your Voice Magazine, and the first openly trans person to run for state office in California.

Preston rose to fame after confronting Caitlyn Jenner over her support for Donald Trump. Since then, she has received awards for her activism, appeared on national TV to discuss issues relating to civil rights, delivered a TEDx talk on intersectionality, worked as an executive producer, and founded You Are Essential, a grassroots organization aiming to combat food insecurity, housing instability, and other barriers to access.

Preston uses her online platforms to advocate for the hashtag #ThriveOver35, which highlights the average life expectancy of Black trans women, which is 35. She also campaigns to stop cyberbullying against women and is often seen beaming on Instagram, acting as living proof that joy after coming out does exist.

Aaron Philip is an Antiguan-American model who became the first Black, transgender, and physically disabled model to ever be represented by a major agency in 2018. Her signing came after a tweet of hers went viral. It said, “Honestly when I get scouted/discovered by a modeling agency it’s OVER for y’all! By y’all I mean the WORLD! It’s real inclusivity/diversity hours folks, get into it!”

Her photos took the internet by storm, and she was signed by Elite Model Management. Since then, both her career and activism have grown stronger and stronger.

She continuously uses her social media to shine a light on the daily injustices experienced by the trans community and to fundraise for Black trans women in need. In addition to talking about serious issues, Aaron’s social media is full of fire modeling shots–and she’s always hyping up herself and her friends.

Actress and advocate Laverne Cox first rose to prominence in Netflix’s Orange Is the New Black, making history as the first transgender person to be nominated for a Primetime Emmy Award in any acting category. In 2015, she won a Daytime Emmy Award as executive producer for Laverne Cox Presents: The T Word.

Cox is often recognized as a trailblazer in LGBTQ+ activism, helping raise awareness of important issues, having difficult conversations, and offering education on necessary societal changes to ensure the safety of trans people. She uses her platform to discuss the need for authentic representation of trans people in TV and film, discuss anti-trans discrimination in politics, and encourage her followers to show up for those whose rights are under attack.

Laverne has received many awards for her advocacy, as well as an Honorary Doctorate from The New School in New York City for her progressive work.

As well as being an activist, Angelica Ross is a businesswoman and actress. After teaching herself about computer programming, she founded TransTech Social Enterprises, which helps employ transgender people in the tech industry.

Her acting career began in 2016 with her role in Her Story, and continued with her roles in the FX drama series Pose and American Horror Story.

As an activist, Ross was an ambassador for the 50th Anniversary Stonewall celebration in June 2019. She also hosted the 2020 Presidential Candidate Forum on LGBTQ Issues, making her the first openly trans person to host an American presidential forum.

She was a featured speaker at the National Trans Visibility March in Washington D.C. and has been awarded by the likes of GLAAD, the Human Rights Campaign, and the Financial Times for her work.

Elle Moxley has dedicated her life and career to fighting for the liberation and safety of Black trans women. She founded the Black Lives Matter Global Network, where she worked as a strategic partner and organizing coordinator, and is especially known for co-organizing the first National Day of Action for Black Trans Women in 2015.

She also founded the Marsha P. Johnson Institute and serves as executive director. She publicly speaks out about dismantling white supremacy and against transphobic remarks made in the media, as well as about the importance of intersectionality and the dangers of performative activism.

Raquel Willis is an African-American writer, editor, and activist. She got involved in activism with fellow trans and gender non-conforming people of color after moving to Atlanta. Later, she moved to Oakland and worked as a national organizer for the Transgender Law Center.

She speaks out about the importance of including trans women in social justice movements, a point she raised as a speaker at the 2017 Women’s March. She also designed the Black Trans Flag,  a version of the Transgender Pride Flag with a black stripe instead of white.

Willis’s award-winning writing has been published by the likes of Huff Post and Buzzfeed, and she became the first trans woman to lead Out magazine as an editor in 2018. In 2020, Raquel was named in the Forbes 30 Under 30.

She was featured in Calvin Klein’s Pride campaign, images of which graced a massive billboard in Manhattan, and has also written for the New York Times, Allure, and Out magazine.

Jones is very vocal about the importance of the Black Lives Matter movement and the alarming rates of violence against Black trans women. She advocates passionately for self-love and acceptance and encourages her followers to feel positive in their bodies, too.

Emily Bashforth is a writer and journalist from the U.K. with a range of print and online experience, as well as a mental health activist and equality advocate. She aims to inspire and guide others with her own experiences, as well as amplify lesser heard voices from other communities.
Commentary
Aaron Philip, Angelica Ross, Ashlee Marie Preston, Black trans women, Elle Hearns, Jari Jones, Laverne Cox, Munroe Bergdorf, Raquel Willis, social media influencers

Is it time for the queer community to cancel Kyrsten Sinema?