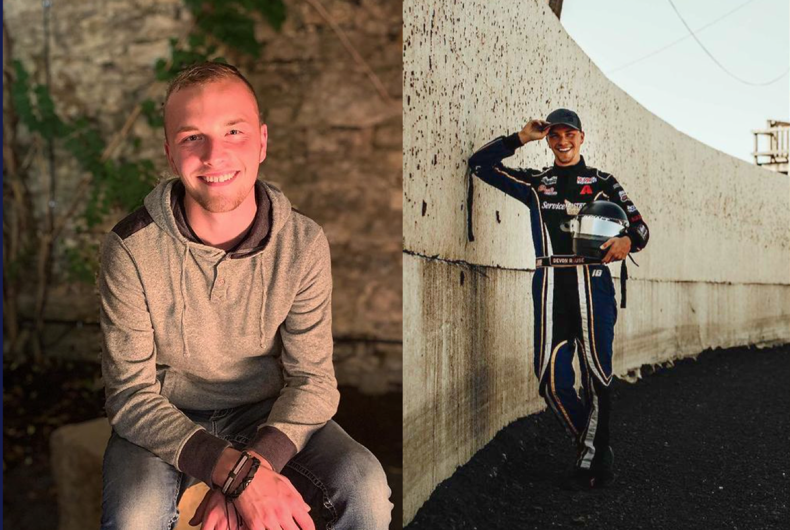 At 22, Devon Rouse has already accumulated professional car racing wins and driven on legendary race tracks like Daytona International Speedway. But arguably, the biggest obstacle he’s overcome in his career is coming out in 2020, at the end of Pride Month.

Born and raised in Iowa, Rouse idolized NASCAR champion Jeff Gordon and began driving karts as early as four years-old. As a teen, he won six local track championships. In 2014, at 15, he entered against 98 other drivers in a “modified lites” car racing competition — and won his first professional race that night.

Since 2018, he has competed in 305 Winged Sprints at the 34 Raceway in West Burlington, Iowa, as well as other Iowa speedways, driving under the number 16.

In 2019, Rouse got on a plane for the first time and flew to Tampa, Florida, for a spontaneous trip. He ended up at a patio bar in Clearwater, where he noticed someone wearing official NASCAR insignia. He went up to the stranger and struck up a conversation with him.

That led him to being asked to shadow a team during a test session on the NASCAR Camping World Truck Series. Next thing he knew, he was invited to join them throughout the series circuit and became part of the family.

Eventually, racing teams around the truck series became enamored with Rouse, and he was scheduled to hit a NASCAR track for the first time in 2020. Unfortunately, the pandemic ended that chance.

Rouse, then turning 21, had to decide if he wanted to keep a secret that he had held since 7th grade: his sexuality. Rather than risk ostracization and discrimination, he could have continue living a “double life” while pursuing his professional career. He decided not to.

“I always said I would take it to my grave,” he told the Toronto Star. “It was so exhausting. I could sit here and have a conversation with somebody and after every sentence I would pause and think about how I said (something) to see if that was a giveaway. I did that with every single word I said, and I couldn’t do it anymore.”

He said to his followers, “I hope that I can continue to have your support through my everyday life, as you all have before. I’m not a changed person, I’ve known and been who I am for a while.

“Devon, isn’t going to change,” he stated. “I am the same Devon that you knew 1 minute ago before you started reading this post. To the ones who unfortunately can’t give me the support, I don’t apologize for my decision and my happiness… I however apologize for what you’re about to miss out on.”

Rouse would later reflect on telling his friends and family, that “The only question [my mom] asked was, ‘why did you wait so long?’”

After coming out, Rouse continued his 305 Winged Sprints races at 34 Raceway. His competitors congratulated him and didn’t treat him any differently.

“I had a lot of people who came up to me to say ‘we are so proud of you’ and ‘we’re glad that you are finally able to be your true self and nothing changes for us’… that was a confidence booster for me, knowing that everything was still okay,” he said.

Despite the pandemic taking away his first shot, NASCAR came calling again when Fast Track Racing, a team in the NASCAR Automobile Racing Club of America (ARCA), asked him to join them at Daytona International Speedway in January.

Rouse did, making him the first out person to participate in ARCA, the first gay man to race on the legendary Daytona track under NASCAR, and one of the few out people to partake in NASCAR at all in its history. (Stephen Rhodes became the first out NASCAR driver, and only one known to date, in 2003.)

Not only did Rouse continue to impress people around the sport at the track, he had put up 34 laps of practice and ended up with his career-best lap that was completed at over 174 miles per hour, according to Outsports. He received approval to compete in ARCA dirt track and short track events for the 2021 campaign.

I can spill on here because there isn’t many followers.. I’m very excited to be running @DAYTONA this coming weekend!! Not only a career changing moment for me, but also going in as the only open LGBTQ @NASCAR Athlete/Driver! Let’s go turn some dreams into reality! 🏁 https://t.co/p0Jy9qiYAG

But he lacked a sponsor: “Unfortunately, I don’t have the funding to do all that.”

So Rouse began a campaign, searching for sponsors by publicly contacting people through social media. Eventually, his outreach worked on Marcus Lemonis, the CEO of Camping World, an American chain who is believed to be the world’s largest RV supplier.

Lemonis, who also stars on CNBC’s The Profit, is sponsoring Rouse for his first official NASCAR race, a stop on the Camping World Truck Series in his home state of Iowa on July 9.

His car will be designed by A-Main Creative, an out graphic designer as well. His vehicle will don the number 33.

He’s hoping that his performance, in addition to his history-making appearance, will secure him sponsorship for at least four more races he’s qualified for.

In the meantime, Rouse is working to promote the inclusion of LGBTQ people in racing alongside out former NFL player Ryan O’Callaghan.

He also hopes that O’Callaghan will help introduce him to his “literal biggest crush,” former “Bachelor” star and ex-NFL player Colton Underwood, who came out in April.

Hey @colton you ever thought of giving a race car driver a chance? 🌹

Like Underwood, people have questioned Rouse’s sexuality and “members of the media question his motives, suggesting he did it to raise his profile,” reported the Star.

But with the support of Fast Track Racing and NASCAR fans, Rouse is looking to prove the critics wrong.

“Now that I am 100 per cent comfortable with myself, my limitations are endless,” he said.

As being @NASCAR’s only openly gay driver.. I, we.. appreciate this. @NASCARDiversity we appreciate you. It’s definitely not easy being the only one, especially in our environment. The multiple daily struggles only make the successes taste even sweeter! I am NASCAR, and I am gay. https://t.co/Al1vkiHGPJ pic.twitter.com/B7tf0wUhVj

Can’t believe I’m where I’m at in life and never would have thought I could say this freely.. for the first time ever, Happy Pride Month 🏳️‍🌈

Pride in Pictures: The joy of the crowd