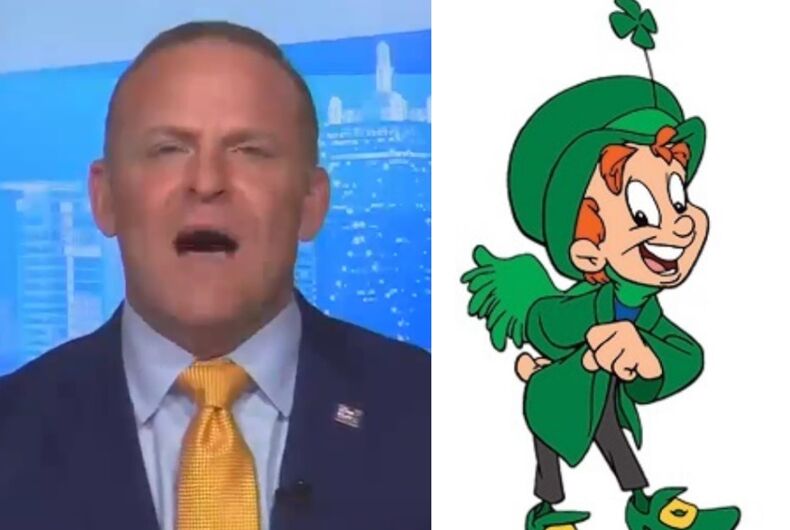 The far-right continues to freak out over a cereal released for Pride month, with one pundit bellowing about how the leprechaun from Lucky Charms is gay and Kellogg’s is “forcing our kids to be confused about their gender first thing in the morning with their breakfast.”

“General Mills has, I think General Mills has a gay leprechaun, right?” asked NewsMax host Grant Stinchfield. “Well, my producer Carly asked me, ‘Is that leprechaun really gay?’ I said I don’t know, maybe: he wears high-heeled shoes, prances around in tights, leads me to believe, probably, that little Lucky Charm leprechaun might be gay.”

Related: Is this animated goldfish gay?

He was talking about “Together with Pride” from Kellogg’s, a limited-edition cereal, one of many products corporations sell each year to celebrate LGBTQ Pride Month.

This cereal has stirred controversy already – perhaps more than any other Pride month product this year – and now Stinchfield raging about how it’s “woke cereal.”

“The cereal is Rainbow hearts, covered in edible glitter. How nice,” he sneered. “Give me a break. Here’s the worst part, the cereal slogan, ‘Too amazing to put into a box,’ and then lists a space for kids to write in their own pronouns. Seriously.”

He joked that General Mills beat Kellogg’s to the punch because the Lucky Charms leprechaun is gay. “He wears high-heeled shoes, prances around in tights.”

Immediately after making that joke, Stinchfield was somehow already resentful that people would criticize him for that joke, even though no one was on his show besides him to be mad at him. “For those of you that want to vilify me for those comments right, right there, aren’t you just as offended by the flamboyant rainbow hearts and glitter as a symbol of gayness? See, there are two standards here.”

He did not explain why anyone should be offended that the rainbow is a symbol of LGBTQ people, especially since it’s a symbol that LGBTQ people themselves made and embraced.

“The moral of the story here is: Switch your kids to granola.”

"I think General Mills has a gay leprechaun, right?…He wears high heels shoes, prances around in tights – leads me to believe, probably, that little Lucky Charm leprechaun might be gay" pic.twitter.com/THaBfIWtZ3

He’s not the only person enraged by the cereal. The SPLC designated hate group Family Research Council’s Tony Perkins is telling his followers that Kellogg’s “donates $3 from every box to an extreme LGBT group, GLAAD, who’s out to recruit and confuse your children.”

In an email blast, he called on people to inundate Kellogg’s with emails to stand up to the cereal company’s “mass deception of our young people.”

Perkins and Stinchfield join other far-right activists from 2nd Vote, the Ruth Institute, and the American Society for the Defense of Tradition, Family and Property (TFP), who were outraged by the cereal last week.

“I am disgusted by your company’s new cereal promoting unnatural sin,” read one petition started to denounce the cereal. “Homosexuality is not something to be promoted or celebrated. Promote purity and virtue, not lust and vice.”

Pride in Pictures: A freeing place where I felt alive