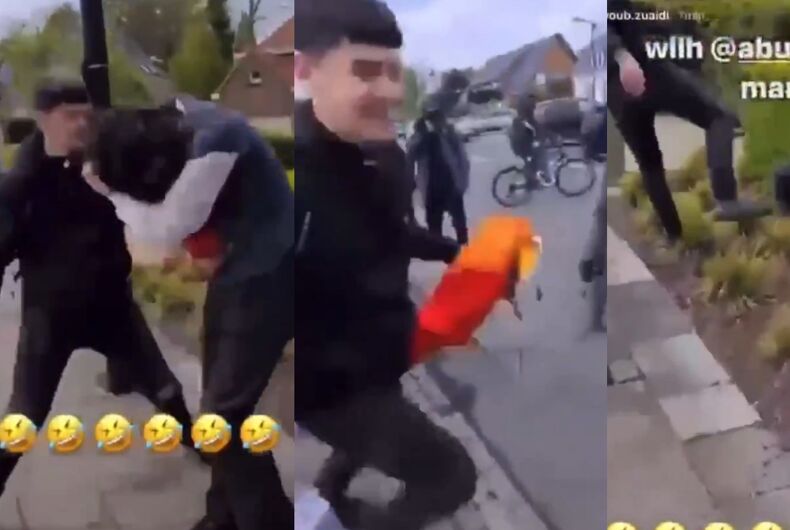 The alleged assailants laughed as they beat up the gay teen and vandalized the rainbow flagPhoto: Screenshots/Twitter

Three teens have been arrested after they posted videos to social media in which they gleefully beat up a gay teen and steal a rainbow flag while denouncing the International Day Against Homophobia, Transphobia, and Biphobia (IDAHOTB).

“Gay Day, what do you guys think about it?” one of the teens can be heard repeating in one of the videos.

Related: Attacker beats gay man to the ground while shouting slurs. He’s too afraid of the cops to report it.

In one video, two teens take down the rainbow flag outside of the SPF Finances building, which is a government agency office in Audenarde, Belgium.

They run over to the nearby River Escaut and throw the flag in while the person filming them mocks “Gay Day,” referring to the IDAHOTB this past Monday.

In another video, the teens beat up a teen boy while laughing. They joyfully kicked and punched the victim on a sidewalk, not relenting as he fell into bushes.

The suspects were arrested on Monday night.

“Three suspects have been identified and taken into custody,” Audenarde Mayor Marnic De Meulemeester told La Libre. “The police acted in a very timely manner. These acts are absolutely unacceptable.”

“I watched those videos with much indignation,” he added. “Such violence, on the IDAHOTB, is of course inexcusable.”

He told Sudinfo that two of the suspects are minors and their hearing will be in juvenile court.

The victim suffered bruises from the attack but no major injuries.