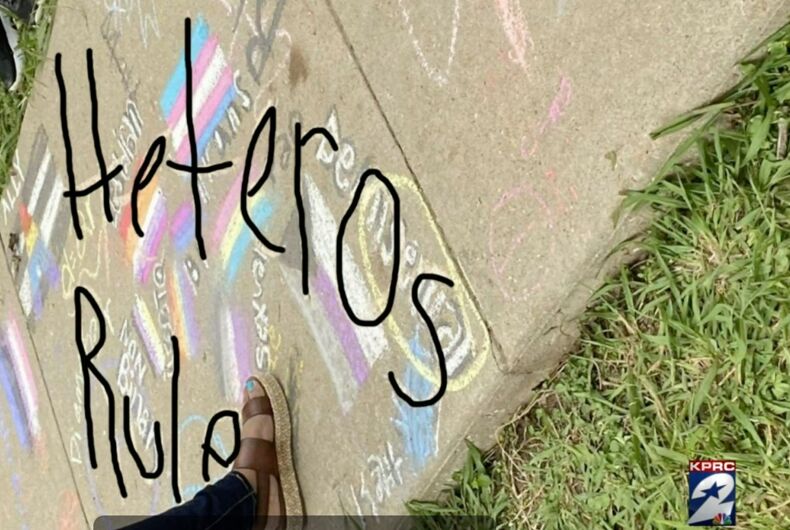 Sartartia Middle School students have accused a teacher of defacing their chalk art of Pride flags by scrawling “heteros rule” over top of it. The school district does not deny the allegation, simply sending parents a “vague” email that said there was a dustup but didn’t explain what happened.

Now parents are left wondering what happened and what the school district is going to do about it.

Related: Teen tells Ellen a teacher thought being trans was a “disease” & “contagious” in school

One parent told a Houston news station that her child was present when the teacher lost control.

The kids were drawing Pride and trans flags on the courtyard sidewalk when the supervising teacher approached and demanded that they stop and erase the flags from the picture. When they refused, the situation escalated quickly.

“The teacher then threatened to pour a drink on the chalk art, and finally grabbed some chalk and wrote ‘HETEROS RULE’ over the pride flags,” the parent said.

The station highlighted the words for viewers after showing an unaltered version in the image above. The teacher’s chalk was peach-colored and can be difficult to see on a small screen.

“This was an opportunity to have a productive conversation. Instead, the kids felt ridiculed and less than, and honestly, afraid because the teacher lost control,” the parent said.

“We have been made aware of an unfortunate incident involving some of our students who reported an interaction with a teacher, which the students stated left them feeling disrespected and marginalized,” Sartartia Middle School Principal Cholly Oglesby said in an email to parents after the incident.

“Keeping in mind that the safety, health, and social and emotional well-being of our students and staff are always our top priority, we were extremely disheartened to hear about these allegations from members of the Sartartia Middle School community as well as some of our feeder pattern high schools.”

“It is my sincere goal to always maintain an atmosphere of honor, inclusion, support and respect on our campus,” Oglesby added.

The school district later released a statement that mostly repeated Oglesby’s statement word-for-word while adding that because it was a personnel matter they would have no further comment.

Facebook keeps its ban on Trump, but his followers are spreading the same lies