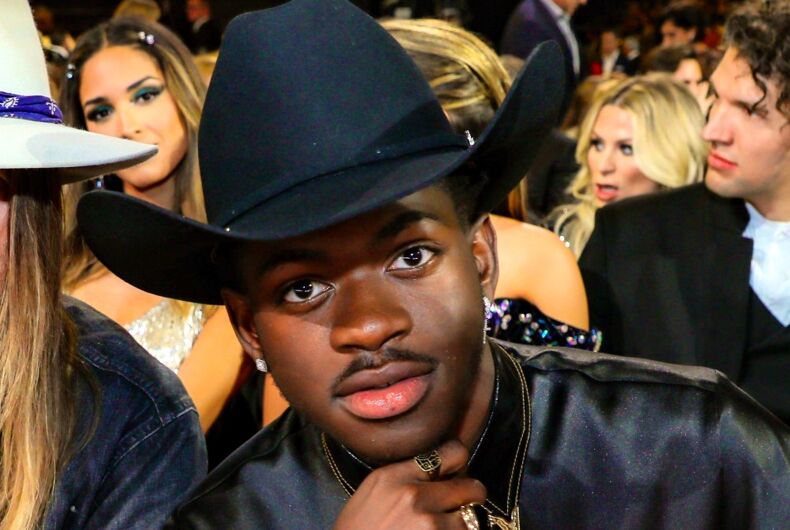 In the cover story for the latest edition of the British GQ Style magazine, out entertainer Lil Nas X opened up and revealed what was going on in his life prior to and right after releasing the hit single “Montero (Call Me by Your Name).”

Nas revealed that after some of the negative reactions to his previous single “Holiday,” he nearly quit music. Instead, he rallied, created “Montero,” and is more committed to his work despite backlash because he’s “rebuilding my self confidence to a whole new level.”

Related: People are blaming Lil Nas X for his mother’s addiction. His dad is defending him.

In what Nas has called his “favorite interview yet” with out journalist and author Jamal Jordan, described the “sense of responsibility” he felt to be a “role model” after becoming a star with his first hit, “Old Town Road.”

“At first I felt a sense of responsibility, but now I kind of just don’t care,” he said. “It’s not my job. Of course I want to spread good ideals, but I’m not nobody’s parents. At the end of the day I’m just doing me, and hoping everybody else is following the lead, and doing themselves.”

Instead, Nas X “feels so free” to be himself, especially in his music, hence the raunchy, unapologetic theme of his recent work and social media presence.

“You’re getting all of me,” he said, “for the first time in my life, these last couple of months, I’m just like, ‘I can do whatever.’”

When Jordan tells him about his work and how “almost everyone I met had never seen an example of a gay black person in pop culture who was truly affirmed by the world,” Nas responds, “yeah, that’s never happened — but it’s going to.”

He added, “Part of my plan is to make sure people know I’m going to do whatever the fuck I want when I want to, and if you’re mad at it, I’m going to laugh in your face.”

He described the change he went through while quarantining and the “internal learning” he did in the last few months, which made him a more confident and care-free person from where he was last year. In November 2020, after seeing that the song “Holiday” wasn’t charting when it first came out and the song received negative responses, he planned to quit music.

“The night before it came out, I was in my shower. I was like, ‘Oh god, I feel like I’m making a really bad decision’ …I was just like, ‘what’s happening?'”

“I told my manager, ‘I don’t want to do it. Let’s cancel it. Let’s get rid of it. There’s no point,” Nas X said, referring to a holiday special for Amazon he was scheduled to tape the next day. “I was crying. I was upset with myself. I felt like I’d… failed myself, almost. I was crying like a crazy person. You know one of those times where you cry so hard your fucking head hurts? It was like that.”

He went to talk with Columbia Records CEO Ron Perry, by which time he had changed his mind. But his conversation with Perry reinvigorated him even more.

The profile notes that four months later, “Holiday” became a platinum-certified hit. “That song is a reminder that I have the power to make any situation better,” Nas said.

Fittingly enough, “Montero” returned to the top of the charts today, its second time atop the Billboard Global 200.

When I asked @LilNasX about his most recent song, he said:

“I know right now there's a shift happening in this younger generation, and that this video is going to be a part of them standing up. I will too”

My story on Montero Lamar Hill for GQ Style UK:https://t.co/KUeM6KcDph

No one likes Caitlyn Jenner according to “bleak” new poll