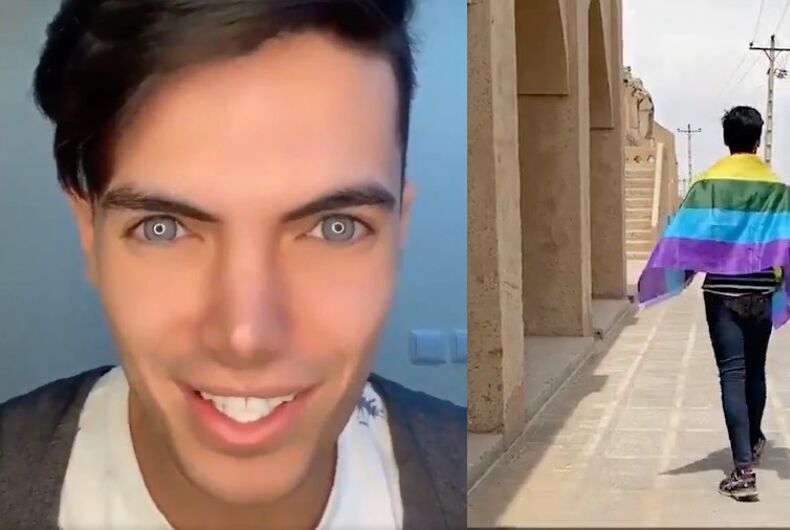 Iranian LGBTQ people have started wearing Pride flags in public in a daring protest that could put them in legal jeopardy. Journalist Masih Alinejad is sharing videos of the brave activists on social media.

They are protesting the “honor killing” of Alireza Fazeli-Monfared, a young gay man who was trying to flee the country but was beheaded by his own brother and cousins for “shaming” the family.

“Iran’s LGBTQ community is brutalized both by the regime & by bigotry in certain families,” Alinejad tweeted along with a video of Fazeli-Monfared. The young man followed her on social media.

“He was so full of life,” she said. Now she’s allowing LGBTQ youth to speak through her platform to share their stories.

Rest in peace Alireza Fazeli Monfared. This 20-year-old beautiful soul from Iran was brutally killed by his brother & cousins for being gay as part of an honour killing.

Iran's LGBTQ community is brutalised both by the regime & by bigotry in certain families#علیرضا_فاضلی_منفرد pic.twitter.com/LsWBlvSKYX

“Hello Masih,” young activists sent her along with a video of themselves walking down the street with the flag around their shoulders. “In memory of all victims of violence fighting for their freedom: we exist, we’re humans and we do fall in love.”

“We’re in Iran now. We’re LGBTQI. We know that we could be arrested, killed, executed for doing this.”

“We exist, and just like many others, have two eyes, feet, hands. We fall in love. Clerics consider us ‘corrupters of the Earth.’ State TV censors us. The education system says nothing about us,” they continued. “We exist. We fall in love. We’ve not harmed anyone… They make fun of us, or even kill us when they find out about our sexuality.”

“Let people see us. We, too, have the right to live and fall in love.”

"We're Iranian LGBTQIs, we exist and we fall in love. Let that sink in"

After the tragic murder of #AlirezaFazeliMonfared in Iran by his family for being gay, Iranian LGBTQI+ activists are taking to the streets, secretly filming themselves and sending me videos.