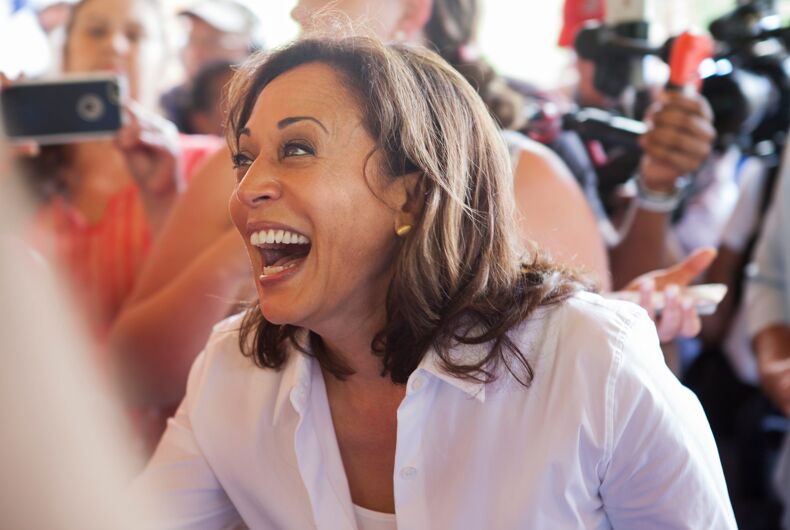 Apparently in search of something to gripe about with the current administration, Fox News decided this weekend to focus on criticizing Vice President Kamala Harris (D), mainly for supposedly controversial and “disrespectful” remarks.

But the right-wing network’s newsroom wasn’t practicing what their pundits were preaching. While hosts on the air were lambasting Harris for her apparent “DISGUSTING” remarks about Memorial Day, Fox News was sharing articles on cocktail trends and summer recipes.

The supposed “disgusting” and “disrespectful” tweet came from Harris on May 29, when she tweeted from her account four simple words.

“Enjoy the long weekend,” Harris’s tweet read, including a photo of herself.

That apparently set off conservatives, who began claiming that the Vice President was trying to both ignore the reason why there’s a “long weekend,” and simultaneously somehow make the holiday about herself.

They also published an article featuring “Memorial Day food and drink recipes to savor all summer long,” the day after their just-as-clear instance of hypocrisy.

Besides the fact that one can celebrate soldiers who gave their life for America and enjoy an extra day off of work and school, Fox News itself was doing exactly what they accused Harris of: Hoping people enjoy the long weekend.

The Fox News article also acknowledged that while Memorial Day is now a federal holiday for honoring the lost life of members of the military, the origins of the “tradition” come from “Decoration Day” celebrations after the Civil War.

Others on social media saw right through Fox News’ hypocrisy and double standards.

It’s like Fox News is a parody of itself pic.twitter.com/mDg4AGJUX2

She literally wished people a long nice weekend. That’s it! It’s not even Memorial Day yet https://t.co/V8WaT9webL

22 minutes apart. You cannot make it up pic.twitter.com/JSaHYMS8yy

Fox News: You should only talk about the sacrifices people have made this weekend!

Also Fox News: Look at these drinks you can pound while pretending Trump is still President and you care about the cops that got beaten half to death on the 6th at the insurrection we promoted!

Yay, something new to stir Fox followers to pretend-outrage. pic.twitter.com/Uw1yAWAwPG

You're going to be very disappointed in yourself in the very near future… pic.twitter.com/06jqIINavs

It's hilarious to see the party that decries cancel / offended / outrage culture promote it. The word 'hypocrite' doesn't suffice.

What if we brought 1/10th of the fury and outrage over a silly tweet to investigating and prosecuting how we let hundreds of veterans die in Veterans' Homes across the country? https://t.co/no5aZTqhsb

Hold up; the people who defended the former guy Trump who called fallen soldiers losers and suckers had the nerve to have fake outrage because Vice President Kamala Harris told everyone to have a good weekend?

Somehow, though, Fox News weekend co-hosts Will Cain, Pete Hegseth, and Carley Shimkus were too outraged to realize the hypocrisy of their message when they came to air today.

Cain, who earned ridicule for claiming last week that LEGO’s Pride products were as hateful than anything KKK leader David Duke had ever imagined, was up in arms about Harris’ four word message from two days prior.

“There are many who are upset the leaders in this country do not quite remember the meaning of this weekend,” Cain claimed.

“You’re in a position of such power and your only answer is ‘Look at me, I’m cute, have a long weekend,'” Hegseth complained about Harris’s tweet.

Shimkus whined that Harris is “the second most powerful person in the world and she said on Memorial Day, have a nice long weekend,” ignoring the fact that the tweet was in fact not sent on Memorial Day.

Cain claimed that Harris’ tweet is evidence that “we are the spoiled grandchildren, the spoiled great-grandchildren of people who truly built this country from a place where your freedom wasn’t something you could so easily take for granted,” adding that Biden going to get ice cream earlier this week was somehow also evidence that the current administration doesn’t respect Memorial Day.

During their coverage, Fox News ignored the fact that Harris had just spoken at the U.S. Naval Academy on May 28, the day before the initial tweet, and interviewed Sydney Barber, the first Black woman to become brigade commander and attend the Naval Academy, in a video posted the same day as the “long weekend” remark.

After, Harris then tweeted on Sunday, May 30 about how she and the Biden administration were preparing for Memorial Day, on May 31.

Throughout our history our service men and women have risked everything to defend our freedoms and our country. As we prepare to honor them on Memorial Day, we remember their service and their sacrifice.

As you may expect, Fox News took this as evidence that Harris had only praised veterans “after taking heat” from them and other conservatives.

The first Black woman graduate of the U.S. Naval Academy was MIDN Janie L. Mines ’80. We regret the error.

How much more will it take for Democrats to recognize that bipartisanship is dead?