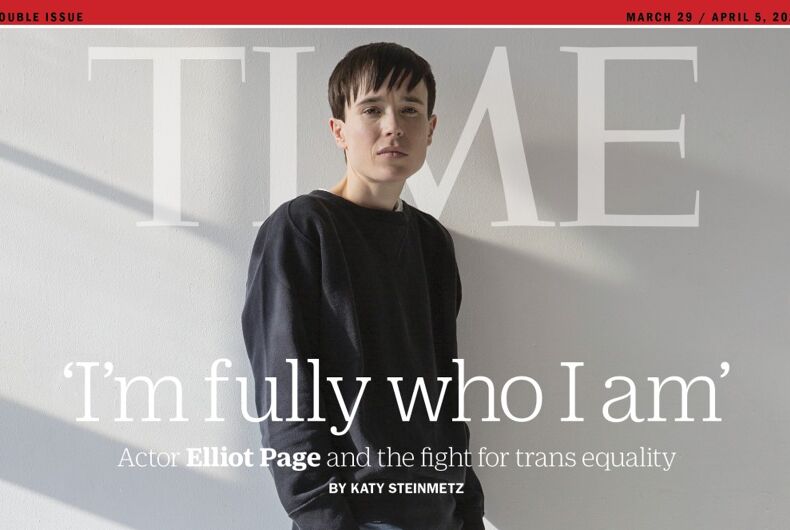 Elliot Page on the cover of TimePhoto: Time magazine

Elliot Page is rallying his fans to get Tennessee’s Republican governor to reject three anti-transgender bills that the state legislature passed.

“Call or email [Gov. Bill Lee] and tell him that trans people who live in Tennessee deserve equality and access to healthcare and public accommodations just like any other citizen,” Page tweeted. “Ask him to veto these bills.”

Tennessee has been one of the most active states this year when it comes to anti-trans and anti-LGBTQ legislation.

The bills Page was referring to include two bathroom bills and a ban on gender-affirming health care for transgender youth.

H.B. 1182 wouldn’t exactly ban businesses from allowing transgender people to use whatever bathroom they want, but it would make it more difficult by forcing them to post a sign that says, “This facility maintains a policy of allowing the use of restrooms by either biological sex, regardless of the designation on the restroom.”

State Rep. Jason Zachary (R) introduced H.B. 1233, which would allow cisgender students to sue if they “encounter a person of the opposite sex in a multi-occupancy restroom” and require schools to let trans students use single-occupancy bathrooms, which they may not have.

S.B. 126 would ban gender-affirming health care for transgender youth. Similar bills were temporarily blocked by a federal judge in Idaho and have caused families in Arkansas to panic as their kids could soon lose access to life-saving care.

Earlier this week, Gov. Lee signed H.B. 529, requiring schools to notify parents if sexual orientation or gender identity are going to be mentioned in class 30 days in advance and gives parents the ability to opt their children out so that they don’t have to hear that LGBTQ people exist.

And in March, Lee signed a bill that bans transgender girls and women from participating in school sports.

LGBTQ advocates have denounced the five bills as a “slate of hate.”

Tennessee could enact five anti-LGBTQ laws this session, including the anti-trans sports ban that's already law in the state. Help us fight the Slate of Hate: https://t.co/Rpnf7TRohB

Tennessee is considering other bills to restrict LGBTQ and transgender rights, including H.B. 800, which would ban books in schools “that promote, normalize, support, or address lesbian, gay, bi-sexual, or transgender issues or lifestyle.”

The bill says that discussing LGBTQ people “offends a significant portion of students, parents, and Tennessee residents with Christian values.”

And just last year, Lee signed a bill to allow adoption agencies to refuse to work with potential parents who “violate the agency’s written religious or moral convictions or policies,” a religious exemption that targets LGBTQ parents.