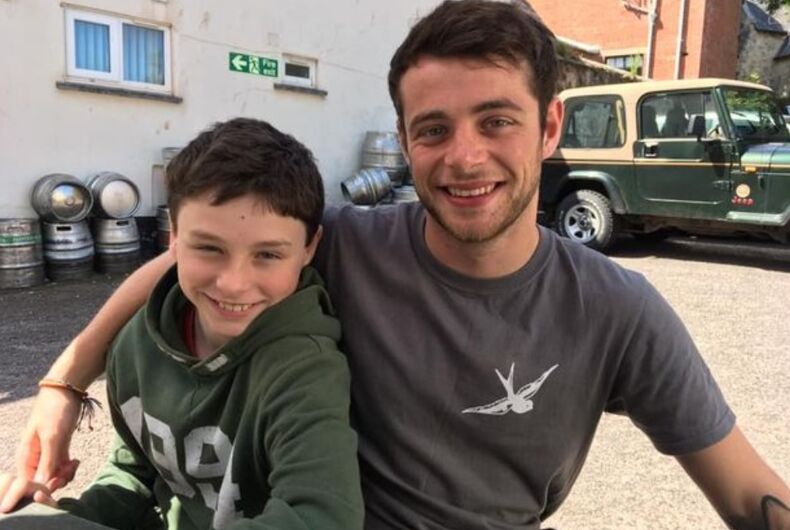 A 12-year-old boy died by suicide after relentless bullying over his sexual orientation forced him out of school.

Riley Hadley’s mother, Alison Holmes, told an inquest on his death that he was “afraid to go to school and the local park in fear of being bullied” for over a year before his death in October 2019. That month, she would come home from work and find Riley’s body cold after he hanged himself.

Riley attended Sidmouth College in Devon in southwestern England for the 2018-2019 school year and lived with his mother, DevonLive reports. His older brother, Jack Holmes, had just moved to Spain and his parents had been separated for ten years.

She was more concerned about the bullying, and at the start of school in 2019 she homeschooled Riley. But she couldn’t do that the entire year because she had to work.

Holmes said that he seemed to be fine in general and that she did not think he would hurt himself.

“I think we had good relationship and he would tell me if something was worrying him,” she said.

Jody Hadley, Riley’s father who said he had not seen his son in weeks, said that their relationship was “very good.”

“I would have intervened if I knew,” he said in a statement for the inquest, explaining that he didn’t know his son was being homeschooled. “I spoke extensively about bullying with him, but he never said he had a problem.”

But others at the inquest painted a different picture. Police said that they talked to his school and 30 of his classmates and that he was reported missing in July 2019 by the school. He was found shortly after and his absence was due to “pressures at school.”

His classmates said that he had already tried to hang himself. Another said that Riley said he wouldn’t be around long.

The bullies allegedly told him to “slit your wrists” and that they wished he was dead. Police said that they believe the bullying was due to homophobia.

On the day he died, he had a doctor’s appointment and he confided that he was feeling “anxiousness” about returning to school.

“He had a cry. We talked and he seemed a bit better,” his mother said about when they got back home from the doctor. Then she went to work.

He sent a text to a friend that day that read, “I have to come back to school.” That was the last message he sent.

“I am satisfied that on the balance of probability, Riley put a ligature around his neck and, in doing so, very sadly intended to take his own life,” said assistant coroner Alison Longhorn at the inquest. An examination, she explained, showed that he died of asphyxiation.

The hearing concluded that no criminal act or third party was involved in his death.

Alix Dobkin, the Head Lesbian, has died at age 80