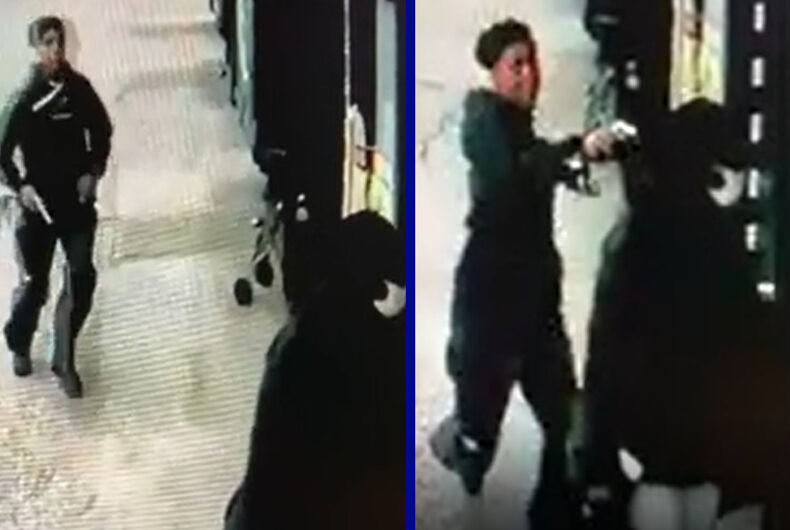 A woman in Brooklyn was shot execution-style Wednesday in broad daylight by her ex-girlfriend in a truly horrifying murder that was caught on video.

Latisha Bell, 38, has been arrested and is being charged with murder and a weapon possession charge in connection to the death of Nichelle Thomas, 52, a mother of two.

Surveillance camera footage obtained by the New York Daily News shows the victim walking on the sidewalk, carrying a bag and wearing a face mask. She goes to open a door, and that’s when Bell came running up behind her.

Bell can be seen pulling out a gun and pointing it at Thomas’s head, and Thomas hasn’t even noticed she is there.

She doesn’t even turn around before Bell shoots. Thomas then falls to the ground.

Witnesses were shocked and couldn’t believe what they saw.

“I had a lot of people here inside the place and we thought it was like a firecracker or something and then we saw the lady fall over,” said Mohammed Ali, who works in a nearby deli.

“When I went outside, I saw the blood coming from her head. I know the lady. She was a very nice person. She was always here. I’ve known her a long time.”

“I heard two shots, looked out the window saw the cops and ambulance and came out and just saw everyone else looking around trying to see what was going on,” said neighborhood resident Tiffany Williams.

She said that EMTs tried to save the victim’s life frantically and took her away in a stretcher.

But she was pronounced dead at the hospital.

“She was a very nice lady,” said a neighbor. “She didn’t deserve this.”

Another neighbor shed some light on what may have led up to the grotesque killing.

“They lived together for years,” they said, adding that Thomas and Bell had a “toxic” relationship. “But they were always fighting. They had a big falling out about three years ago and she left.”

Police arrested Bell later the same day and have recovered the weapon.

4 LGBTQ staffers fired from brewpub seeking “a change in culture.” Guess what they meant.