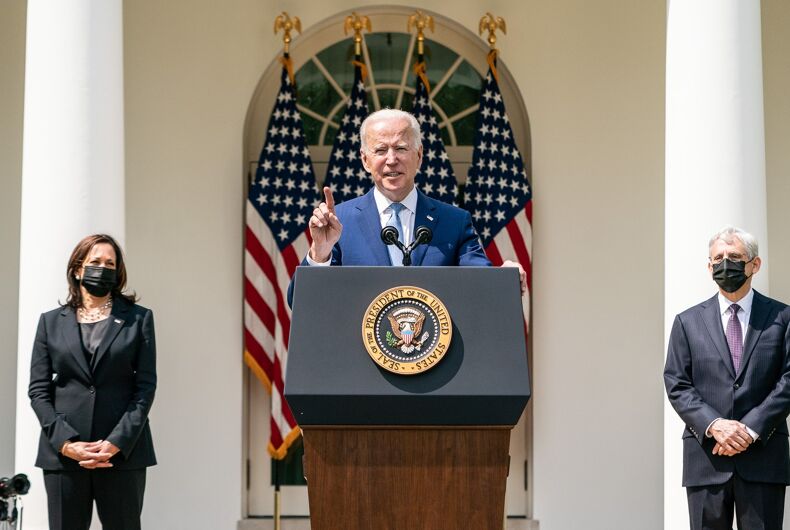 The White House responded to questions about the potential of any legal action being taken against states where lawmakers are enacting anti-trans laws across the country.

Press Secretary Jen Psaki couldn’t promise that any legal action will take place, but emphasized that it is still President Joe Biden’s view that the bills are illegal under federal law and that he “certainly can” ask Attorney General Merrick Garland to direct the Justice Department to seek litigation.

Chris Johnson, the White House Correspondent for the Washington Blade, asked Psaki at the April 8 White House press briefing, “despite warnings [that] anti-transgender bills are an illegal form of sex discrimination, a number of states have enacted into law measures against transgender youth.”

Johnson specifically noted that the so-called “Arkansas Save Adolescents From Experimentation (SAFE) Act,” which will ban gender-affirming care of any kind from being given or even offered for consideration to trans youth in the state. That includes surgery (which trans youth rarely undergo before the age of 18), hormone therapy, and reversible puberty blockers.

The bill was vetoed by Gov. Asa Hutchinson (R), but the veto was subsequently overridden by the Republican supermajority in the Arkansas Legislature.

“Will the President reach out to the Attorney General for legal actions against these measures?” he asked.

Psaki responded, “I can’t stand here and predict legal action. Obviously, that would be a decision that would be made by the Justice Department and the attorney general.”

“What I can say,” she continued, “is that the president’s view is that all persons should receive equal treatment under the law no matter their gender identity or sexual orientation. That’s fundamental to how he will make laws — advocate for laws, I should say.”

That view will also guide “how he will communicate about his views on the rights of transgender individuals in the country, and certainly what his view is as it relates to the actions by the government.”

In a follow-up question to that, Johnson asked if Biden would engage in communication with the Attorney General on the matter.

Psaki replied, “he certainly can,” but she reiterated, “I don’t have anything to predict for you at this time.”

The White House’s later response to questions about the wave of anti-trans legislations and proposals across the country comes as many legislatures prepare to vote on anti-trans measures this week. Despite the Democrat majority in the United States Congress and the current Presidential administration being Democratic, a majority of state legislatures and state governorships are controlled by Republicans.

Once the measures are passed into law, if the Justice Department doesn’t challenge them, the issues will likely fall to trans people or trans advocates to challenge in the judicial branch. The judiciary is responsible for deciding if executive or legislative acts are legal and constitutional or not.

From there, the judicial process can take litigative disputes all the way to the Supreme Court, but that could take years. Additionally, the Trump administration, which opposed trans rights and enacted trans bans on the federal level, appointed many conservative judges to federal court positions. That includes three of the justices sitting on the Supreme Court.

The Justice Department, under the guidance of Merrick Garland, Biden’s recently-confirmed Attorney General, has yet to take any action or issue a response to the proposals.

During his confirmation hearings, Garland said that he not yet decided whether trans people should be able to compete in sports in accordance with their gender identity.

“I’ve not had the chance to consider these kinds of issues in my career so far,” he told the Senate Judiciary Committee, “but I agree that it’s a difficult question.”

He also said, however, that “it is the job of the Justice Department” to protect trans people from violence, responding to Sen. Cory Booker (D-NJ) when asked about the rates of violence trans people of color disproportionally face across the country.

“It’s clear to me that this kind of hateful activity has to stop, and yes, we need to put resources into it,” Garland responded. “These are hate crimes and it is the job of the Justice Department to stop this.”

The White House previously warned states that are considering anti-transgender bills that those bills are illegal under federal law.

“The president believes that trans rights are human rights and that no one should be discriminated on the basis of sex. Not only is this the law of the land, it’s his own deeply held view,” said White House Press Secretary Jen Psaki during a press briefing in March.

Jen Psaki to me on state laws against transgender youth: “All persons should receive equal treatment under law, no matter their gender identity or sexual orientation.”

Psaki adds she has “nothing to read out” when I ask if Biden will reach out to AG on legal action against laws.

A mob tried to harass a school board member over LGBTQ rights. So her neighbors responded.