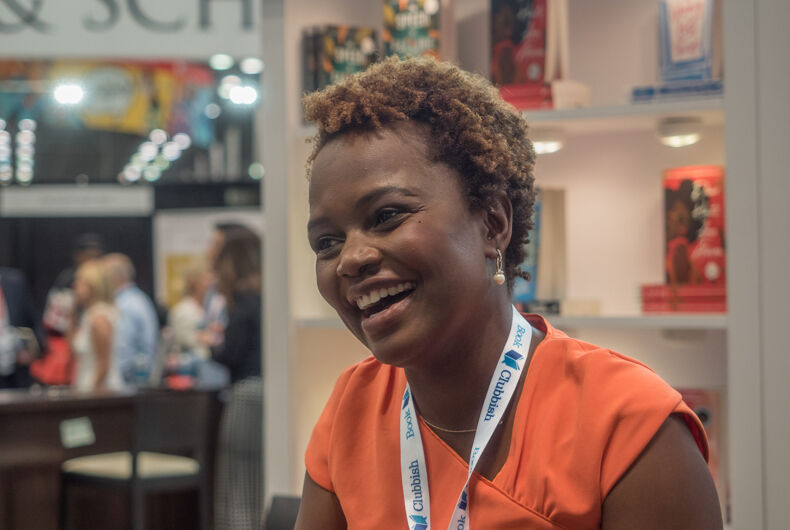 Karine Jean-Pierre at BookExpo at the Javits Center in New York City, May 2019.Photo: Wikimedia Commons

The Biden White House has made history once again. Karine Jean-Pierre, the principal deputy White House Secretary, became the second Black woman and the first out Black woman to host an official White House Press Brief.

She delivered a briefing for about 16 minutes on March 31, standing mid-flight aboard Air Force One.

The plane was en-route to Pittsburgh, where the President was promoting his American Jobs plan, a $2 trillion package to expand and update infrastructure. She took questions on the plan, Biden’s conversation with Senate Minority Leader Mitch McConnell, and the Derek Chauvin trial.

Hunter Walker, the White House Correspondent for Yahoo! News, tweeted a photo he took of Jean-Pierre delivering the brief as he “had the sense I was witnessing history.”

Walker noted that she also delivered the briefing, commonly referred to as a “gaggle,” on March 19 as well. That was also on Air Force One, on behalf of the president while he was on-route to Atlanta. That was for 24 minutes.

Doug Mills, the Washington bureau photographer for the New York Times, shared a photo from that occasion.

.@KJP46 has become the first Black woman to hold a White House press briefing in about 30 years.

Here's a picture of her gaggle on Air Force One yesterday.

I took it because I had the sense I was witnessing history. pic.twitter.com/3iJCaQqnYJ

As Walker wrote in January, Judy Smith was the first Black woman to hold a press brief from the White House in 1991. She served as Special Assistant to the President and Deputy Press Secretary under President George H.W. Bush from 1991 to 1993. Her crisis management skills guided the administration through the public controversy around Clarence Thomas’ nomination to the Supreme Court, beginning her reputation as a “fixer.”

That reputation would lead her to inspire the acclaimed television drama Scandal.

“I didn’t think about it at the time.… What I thought about at the time was that going to work in the White House was… just such an incredible opportunity,” Smith said in a December 2020 interview.

“It was a dream come true.”

Smith’s briefing wasn’t televised or celebrated by the White House at the time as the first, but Smith added, “Coming into the White House, I was very much aware that I was coming into an institution, like so many others, where there was a lack of diversity. There’s no doubt about that… I am always aware of that in any situation and every single day of my life.”

Karine's first gaggle on the plane actually came when Biden went to Atlanta on 3/19. I believe the great @dougmillsnyt may have a photo. But yesterday was her first gaggle that was fully streamed on the White House site since it was the big infrastructure bill rollout.

Shout out to @DeanObeidallah for pointing this out! https://t.co/OT7VTOXcTC

And here's Doug's photo of @KJP46 on 3/19, the first time a Black woman conducted a White House briefing in about 30 years https://t.co/tlNbezaUap

Originally from the French West Indies island of Martinique, Jean-Pierre, 43, was raised in New York City and attended graduate school at Columbia University, where she received a master’s degree in public affairs.

Noted as an out political powerhouse, she started her career in politics working for the John Edwards campaign in 2004 and later worked for Barack Obama’s 2008 and 2012 campaigns, as well as Martin O’Malley’s 2016 presidential campaign.

Jean-Pierre, who once boasted that she was “everything that Donald Trump hates,” was assigned to be chief of staff to Vice Presidential nominee Kamala Harris during the 2020 general election, putting a lesbian in one of the Biden-Harris campaign’s most senior positions.

After being considered a “top contender” for White House Press Secretary in selections for Biden’s “most diverse” cabinet, she was instead appointed to the nearly as prestigious role of the principal deputy press secretary for the White House.