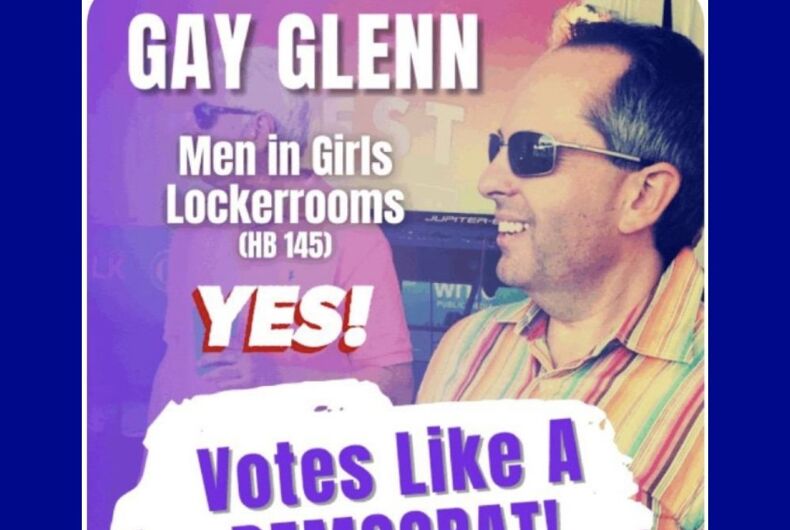 The image with the text messagePhoto: Screenshot/Twitter

Virginia lieutenant governor candidate Glenn Davis Jr., a Republican, has condemned a mailer sent out by one of his opponents as homophobic. The mailer showed Davis at Pride in a rainbow shirt, and the day after, people started receiving texts showing that same picture of him with the words “GAY GLENN” and “Men in Girls Lockerrooms… YES!”

“I’m sorry for my colleague’s homophobia, but I don’t believe the government has any place in our bedrooms PERIOD,” tweeted Davis, who is currently a state delegate, with a picture of the mailer.

Related: Republican candidate sends out homophobic flyer then lies about it

Earlier this week, Davis accused an opponent in the Republican primary for lieutenant governor — former state Delegate Tim Hugo — of sending a homophobic mailer, which used a picture of Davis at Pride in Virginia Beach in a colorful shirt, captioned “VOTE ‘NO.'”

Tim Hugo sent a mailer attacking me for participating in #Pridefest with @RPofVB. I'm sorry for my colleague's #homophobia, but I don't believe the government has any place in our bedrooms PERIOD. pic.twitter.com/Fed7ql7EDR

Hugo’s campaign isn’t denying the mailer. In fact, a representative of the campaign told WRIC that the mailers are just about Davis’s “liberal voting record” and that they took the picture from Davis’s Facebook page.

“Accusations that it was anything else are nothing more than an attempt to distract voters from the fact that Glenn supported Obamacare expansion and voted this year to give taxpayer funded tuition to illegal immigrants,” the campaign representative said.

The state Republican Party will choose its candidate at a convention in May, and Davis said that delegates attending the convention also received homophobic text messages about him.

“Help Glenn come out of the closet by not ranking him on May 8th,” the text read in part. The text said that Hugo was “the only conservative” in the race.

Davis shared a screenshot of an image accompanying the texts that used the same picture that Hugo’s campaign used, except this time the “Pridefest” poster in the background is more faded and the emphasis is on Davis’s colorful shirt – which is apparently gayer than a literal Pride poster – and House Bill 145.

That bill doesn’t require any specific school policy on transgender students’ rights, as Davis pointed out, but it did order the Virginia Department of Education to develop a model policy for school districts to use to support transgender students “in accordance with evidence-based best practices.”

This text is being sent around to look from Hugo. However the other part reads eerily similar to verbal attacks from another campaign. Also HB145 only asks model policy be created by the state but doesn't require those exact polices be adopted nor men allowed in girls lockerrooms pic.twitter.com/OPkpSTblII

Hugo denied that the text was sent by his campaign, saying that he condemns “the language used in this ridiculous text.”

A recent text sent attacking my opponent Glenn Davis is NOT from our campaign. We condemn the language used in this ridiculous text. The text that went out tonight falsely identifying as us was illegal. We intend to track down those responsible & hold them accountable.

The state requires that political ads say who paid for them, but the texts did not disclose this information.

Editor’s note: An earlier version of the headline for this article incorrectly stated that Davis is in fact gay. He has not publicly identified as such and he is married to a woman. We regret the error.