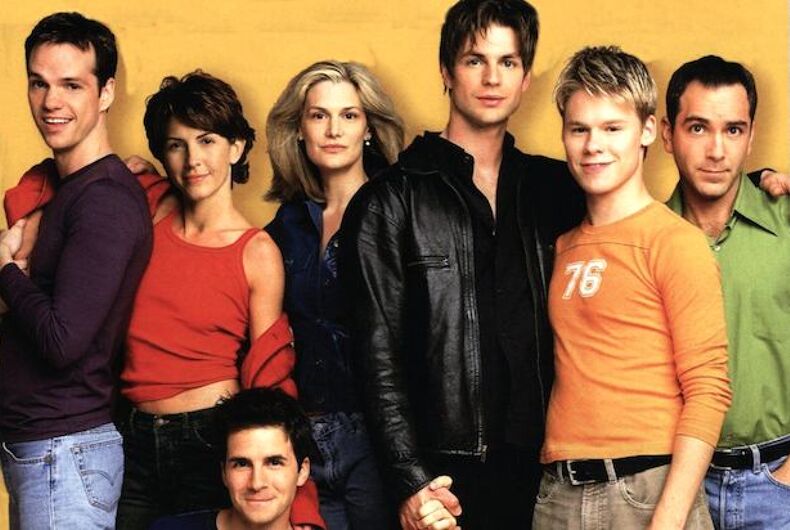 The cast of Queer As FolkPhoto: promo photo

Queer As Folk is getting a third rendition as a television series. Eight episodes of a reboot created by out Canadian director Stephen Dunn and produced by Universal Cable Productions have been ordered for NBC’s streaming service hub Peacock.

The new version has the creator of the original UK series, Russell T. Davies, serving as an executive producer.

Related: The cast of Schitt’s Creek broke down in tears after they were read a letter from moms of LGBTQ kids

The North American remake of the show, which is what most people have become familiar with, first aired in 2000 and ran for five seasons on Showtime. This version was set in Pittsburgh (but filmed in Toronto) and starred Gale Harold, Hal Sparks, Randy Harrison, Peter Paige, and Sharon Gless.

The project was first reported in 2018, being developed for the television network Bravo, which is in the NBCUniversal family of networks. Bravo’s Queer As Folk was described at the time as a “modern take on the original British series that centers on a group of club-going friends who find support in the gay community following a tragedy.”

Now, Dunn’s rendition is similarly described as “a diverse group of friends in New Orleans whose lives are transformed in the aftermath of a tragedy.”

“Queer as Folk was more than just a show, it was a ground-breaking and necessary voice for so many people,” Lisa Katz, president of scripted programming at NBCUniversal, said in a statement. “Stephen’s new version for Peacock arrives at yet another pivotal moment in our culture.”

Davies is attached as executive producer in his first production after the impactful It’s a Sin miniseries on HBO Max. Dunn will write and executive produce for the eight episode order, and direct the pilot episode.

Dunn said in a statement, “It is a surreal honor to adapt the notoriously groundbreaking series by Russell T. Davies. When the show originally aired, the idea of unapologetic queer stories on TV was so provocative that I felt I could only watch ‘Queer as Folk’ in secret.”

“But so much has changed in the last 20 years and how wonderful would it be if the next generation didn’t have to watch ‘Queer as Folk’ alone in their dank basements with the sound muted, but with their family and friends and the volume cranked all the way to the max…”

Dunn made waves with his direction of “The Son,” the final episode of the Apple TV+ anthology series Little America, which Dunn co-wrote. “The Son” focused on “a gay Syrian refugee seeking asylum in the [United] States” and like the rest of the show, was based on a true story as published in Epic Magazine.

The show had to relocate filming to Canada to cast Arab actors in the episode, many of whom are from countries that fell under Donald Trump’s travel ban.

Then, after it came out in January 2020, the episode was completely censored in 11 countries in the Middle East and Asia according to episode co-writer Amrou Al-Khadi. It just received a GLAAD Media Special Recognition Award.

Lee Eisenberg, who also worked with Dunn on Little America, is also an executive producer. No cast members have been officially named or attached.

about 5 years we’ve been pushing this boulder uphill… really putting the “sis” in “sisyphean” someone pinch me. i can’t believe this is finally happening. https://t.co/tiYZ6i7shw

Could not be prouder of my dear friend and inspirational collaborator on Little America, the wonderful and supremely talented @notstephendunn. She’s changing the game!!!! You’re not ready for the magic this is going to bring 😍😍😍 – love u bb! https://t.co/qXbksfTA62

A post shared by the other stephen dunn (@notstephendunn)

Lil Nas X’s “Satan shoes” are being recalled. Do they really think people will send them back?