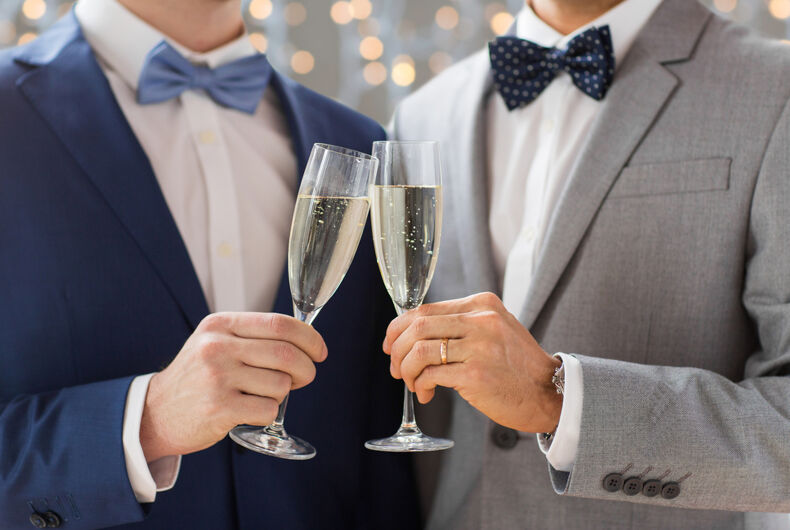 On April 1, 2001, three gay male couples and one lesbian couple got married in the Netherlands, the day that the country’s law recognizing same-sex marriage went into effect. This makes today the 20th anniversary of marriage equality, since the Netherlands was the first country to legalize it.

“There are two reasons to rejoice,″ then Amsterdam Mayor Jacob Cohen told couples when he presided over their marriages just after midnight that day. ″You are celebrating your marriage, and you are also celebrating your right to be married.″

No country recognized marriage between two people of the same sex prior to the 21st century, but a law to legalize marriage equality passed the Dutch legislature in 2000 and went into effect several months later.

“People told me that the Netherlands would be the first and the last country [to legalize marriage equality], the rest of the world won’t follow you,” said Henk Krol, a member of the Dutch parliament who supported the bill.

Now 29 countries allow same-sex couples to get married in at least some part of the country. Not only has this increased legal protections for LGBTQ couples and families, it has also increased acceptance of LGBTQ people. A study published in JAMA Pediatrics looked at data from 1999 to 2015 and found that legalizing marriage equality resulted in a 14% drop in suicide attempts among LGBQ youth, or 134,000 a year.

“It’s nicer to say to other people ‘he’s my husband, he’s my man,’” Dolf Pasker told Reuters. He and his husband Gert Kasteel were one of those first four couples. “It has helped me to accept myself.”

In the Netherlands, an estimated 20,000 same-sex couples have gotten married in the last 20 years; about 9,500 were male couples and 10,500 were female couples.

In the first ten years of marriage, 26% of female couples divorced. That’s higher than the 14% rate for male couples, which is about the same as the rate for opposite-sex couples.

None of the couples that married on that first day 20 years ago divorced. One of the men passed away in 2011, but the others are still together.

Want to be happier? Own less stuff.