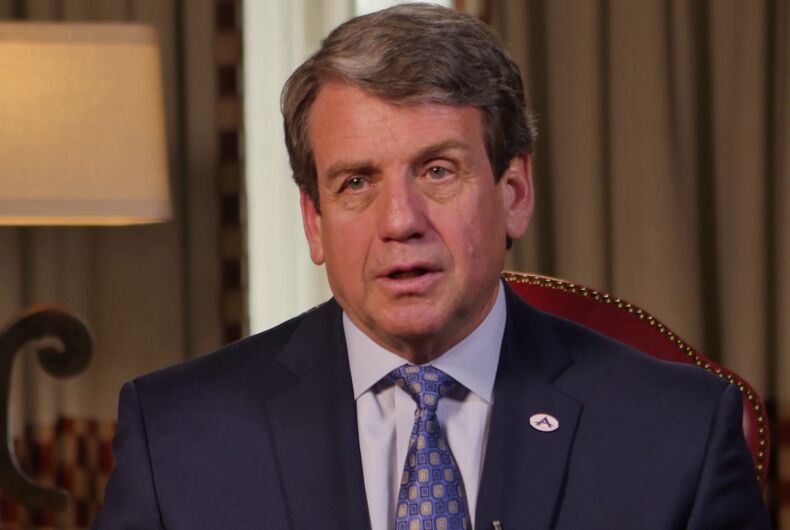 Earlier this week, former Vice President Mike Pence (R) announced his Advancing American Freedom group that will focus on traditional religious right issues along with economic and foreign policy. Abortion and “religious freedom” advocacy against LGBTQ rights will be a large aspect of the group’s planned attacks on President Joe Biden’s progressive agenda.

Former Trump aide Kellyanne Conway and other Trump administration officials like Pence’s former Chief of Staff, Marc Short, were already announced as members of the group’s advisory board. Now, Pence has reportedly, and quietly, added one other name: Michael Farris, the president and CEO of the Alliance Defending Freedom (ADF), an anti-LGBTQ hate group.

The ADF, which was first designated a hate group by the Southern Poverty Law Center (SPLC) in 2016, had a storied relationship with Pence and others throughout the Trump administration.

ADF is an SPLC designated hate group that is involved in a number of cases opposing LGBTQ equality. The group has fought in the past for the criminalization of homosexuality, with attorneys associated with the organization saying that “same-sex sodomy is a distinct public health problem” and calling LGBTQ activism “the new promotion of pedophilia.”

Today, the ADF says that they’re not a hate group and that their “limited engagement in [LGBTQ issues] was based on our belief that marriage between one man and one woman is the best institution for human flourishing.”

Yet, anti-LGBTQ advocates such as Pence and Amy Coney Barrett — who has received at least five checks from the ADF since 2011 — continue to have deep ties to the group. Farris was one of the guests at the COVID-19 “superspreader” Rose Garden event where Trump announced Barrett as his nominee to the Supreme Court.

ADF has recently been involved in litigation to ban transgender girls from competing in high school sports, keep conversion therapy legal, and to create expansive religious exceptions to anti-discrimination laws.

They’re also one of the groups that is helping organize the wave of anti-transgender legislation across the country, and offered the litigation services to protect the laws.

Pence’s new group reportedly has former President Donald Trump’s blessing despite their falling out after the MAGA riot at the Capitol building. Pence was mocked for his blind obedience to Trump, but he said that the group will tout his ties to the Trump administration as part of his effort to woo supporters to his camp.

Farris became the group’s president and CEO in 2017, long after it made its name pushing an anti-LGBTQ agenda. Farris has complained about being referred to as a hate group leader, although the ADF remains active in opposing LGBTQ rights.

“Groups like Citizens for Transparency and the SPLC gloss over the obvious differences between disagreement and discrimination. Rather than seek to understand the other side of a conversation, the SPLC vilifies any person or group with whom it disagrees,” he claimed in 2018, after a billboard highlighting the group’s anti-LGBTQ work was put up in New York City’s Times Square.

Similarly, Pence also disliked being criticized for his anti-LGBTQ stances. He even spoke to a hate group during his Vice Presidency about it — which was the ADF.

Sitting across from Farris in 2019, he whined that he “didn’t see coming” the backlash his wife would get for working at a school where LGBTQ students, staff, or faculty are banned. He said that it is important to forgive people for the sin of caring about equality and social justice.

He then stressed the importance of prayer: “Number 1 is, spend more time on your knees than on the internet.”

Nick Surgey of The Intercept first broke the news that Farris was joining Pence’s organization.

*SCOOP* The CEO of the religious right hate group Alliance Defending Freedom @AllianceDefends has been added to the list of Advisory Board members for @Mike_Pence new Advancing American Freedom group. @michaelfarris was not listed when the organization was launched on Wednesday pic.twitter.com/Nk3Y3tQopn

The @splcenter lists Alliance Defending Freedom as a "hate group", because of the organization's support for criminal punishment just for being LGBTQ+. Now the ADF CEO is an advisory board member to the new @Mike_Pence org. https://t.co/zCqZJ1xm2w https://t.co/GUgAgHMT51

A mob tried to harass a school board member over LGBTQ rights. So her neighbors responded.