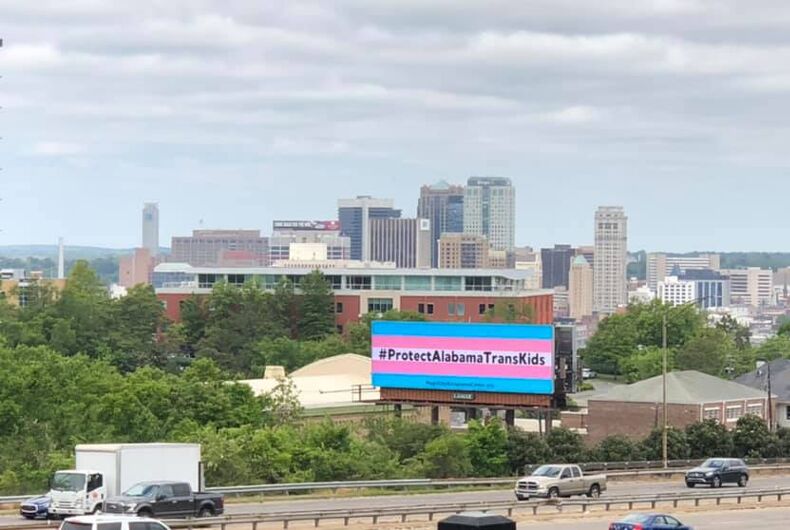 A billboard sporting the trans flag beside Highway 280 in Birmingham, Alabama implores state legislators to stop persecuting transgender youth. Instead, it tells the rightwing lawmakers they should #ProtectAlabamaTransKids.

Magic City Acceptance Center, which serves LGBTQ youth, is behind the project and the reaction from trans kids themselves has made it worthwhile even if no hardhearted Republicans change their mind.

Lauren Jacobs, the center’s youth programming director, told them that it is the “largest trans flag that has ever flown over the state.”

“We have wanted to do something that was an out-loud, massive-scale show of presence — to show that trans people are here, that trans youth are here, and that there are people in Alabama that care about these issues and are fighting on behalf of trans young people,” Jacobs said.

Amanda Keller, MCAC’s founding director, said she had heard from one young client who isn’t out to their parents. They saw the billboard from the backseat of the car and squealed in delight, but “then immediately had to rein it in.”

Representation and visibility are important parts of supporting the mental health of transgender youth.

While Gov. Kay Ivey (R) signed a bill this week to repeal the state’s requirement that sex education in schools teach that homosexuality is unacceptable, unhealthy, and illegal, most of the legislature’s time has been spent demonizing transgender youth.

One of the most conservative states in the country, Alabama just passed a bill to ban transgender girls from participating in school sports.

The state senate also passed a bill to criminalize doctors who provide gender-affirming care to trans people under the age of 19 and threatens them with up to 10 years in jail. The extreme measure would even ban psychotherapists from affirming a transgender minor’s gender.

Politicians from the state have made headlines in recent years for calling LGBTQ people “freaking queers,” and as recently as 2019, Republican lawmakers have tried to end marriage licenses entirely to stop marriage equality.