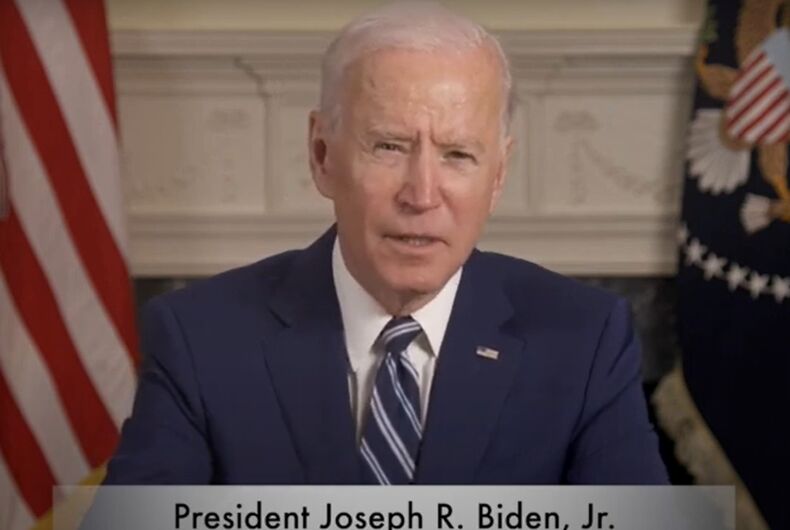 President Joe Biden spoke to the transgender community at the NCTE awardsPhoto: Screenshot/YouTube

President Joe Biden addressed the transgender community last week to renew his promises for the Equality Act and other pro-equality policies.

“I want every trans person, especially every trans young person out there, to know I see you, I hear you, and I’ll continue fighting for an America that transgender people, like everyone else, can live in and thrive in and succeed,” he said in a virtual speech at this year’s National Center for Transgender Equality (NCTE) Trans Equality Now Awards.

Speaking on the Transgender Day of Visibility last week, Biden said, “We have made significant progress in securing the civil rights of LGBTQ+ Americans, but we recognize that too many transgender people still face systemic barriers to freedom and equality.”

He discussed alarming statistics on suicide and homelessness. He also touted work his administration has done so far in advancing trans rights, like signing an executive order on his first day in office that extended some civil rights protections to LGBTQ people, ending the trans military ban, and the confirmation of Dr. Rachel Levine as assistant secretary of health, the highest ranking transgender U.S. official in history.

“I want to see us pass the Equality Act,” he said, “to provide long-overdue federal civil rights protections on the basis of sexual orientation and gender identity.”

Passing the Equality Act in his first 100 days in office was a central promise of the Biden-Harris campaign in 2020, but it’s 78 days into his term and the bill’s chances aren’t looking good in the Senate.

The Equality Now Awards this year honored Ruby Corado, the founder of Casa Ruby, which provides social services in D.C. and is led by transgender women of color.

Rep. Marie Newman (D-IL) received the Ally Award. Her daughter is transgender and she spoke about her experiences when the Senate Judiciary Committee held a hearing on the Equality Act last month. She also put up a transgender flag in front of her office, which is across the hall from QAnon Rep. Marjorie Taylor Greene’s (R-GA) office after she made transphobic statements.