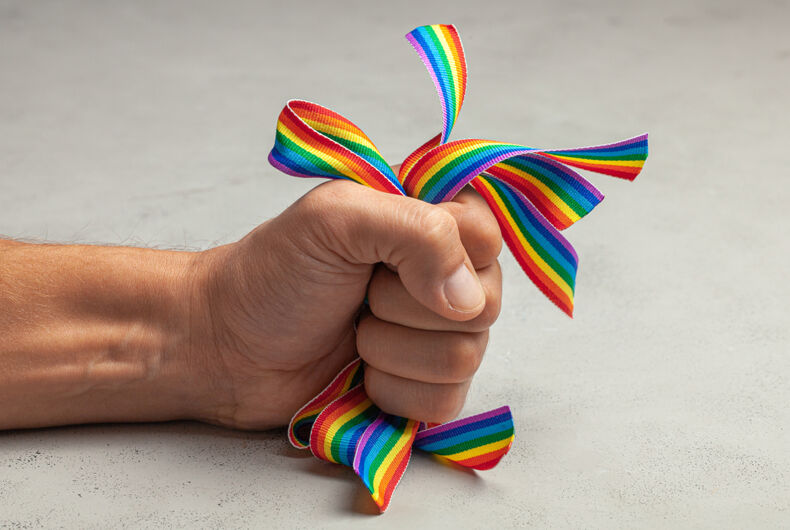 A Republican mayoral candidate went on a long, hateful tirade on Facebook accusing LGBTQ people of being child molesters and claiming that he pulled his daughter out of school because “13 out of [his daughter’s] 16 friends” are “lesbian or bisexual.”

Tim Rowbottom calls himself “an entrepreneur who is a man of the people and represents the taxpayers of the City of Harrisburg” and he is the only Republican registered for the Harrisburg, Pennsylvania mayor election in November. And he’s getting condemnation for his extreme statements about LGBTQ people.

In a Facebook post that he said was an “Official Press Release!” Rowbottom said that it is time to “make clear my views concerning a large population that occupies Harrisburg, the LGBT,” saying that it’s “not my intention to degrade or attack them in any way” before doing just that.

“I believe in creation and that anything else besides what we were created for is not something we should promote,” he wrote.

“You can look up the statistics concerning the percentages of LGBT that are a product of abuse,” he continued, implying that people turn LGBTQ as a result of child abuse, a common homophobic claim that is not true.

“The Bible makes it clear to me that these things are an abomination,” he wrote, saying that the city needs to prevent straight people from having “direct contact” with LGBTQ people in order to stop the “cycle of abuse.”

“I believe we as leaders have allowed these seeds of abuse to be replanted as normal into the next generation,” he wrote. “I strongly believe that suicides occurs when confusion is in control. I witnessed the results of living in an area where large amounts of LGBT reside.”

The rant turned even more bizarre when he wrote about his daughter, whose age he didn’t specify.

“I had to pull my kids out of these City Schools when my daughter repeatedly came home saying that 13 out of her 16 friends were lesbian or bisexual, and that she thought she may be Bisexual,” he wrote. “I have had enough!”

“Why are our schools failing? If we promote more confusion than other areas than we will yield more problematic behaviours.”

After discussing religion and making Harrisburg take a “faith approach,” he turned back to schools.

“No more promoting LGBT views onto our children!” he wrote. “DEFINATELY NO TRANSGENDER MENTORS ALLOWED IN SCHOOLS AT ALL!”

It is not clear what he meant by “transgender mentors” in schools.

Rowbottom got a lot of negative comments and feedback to the Facebook post, but he stood firm. He posted a screenshot of someone calling out his “bigoted, crazy rhetoric” and just wrote “Lol.”

Later, he wrote another response.

“Its obvious that my statements yesterday got under some skin (devils),” he wrote. “The devil does not want to give up his foot hold in our nation.”

The primaries for Harrisburg’s mayoral race will be held on May 18, 2021. Several prominent local politicians are running in the Democratic primary.

Democrats say that Rowbottom doesn’t have much of a chance to win.

“In Harrisburg, historically who wins the mayoral primary wins the election in the fall. And in this case, the Democratic primary is where it’s at,” said Pennsylvania Democratic consultant Danielle Gross on the local news program This Week in Pennsylvania.