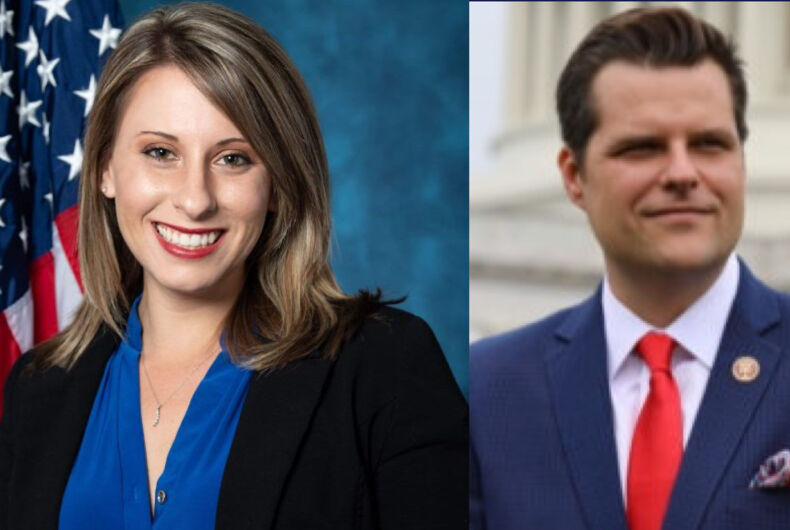 Less than two years ago, then-Rep. Katie Hill (D-CA) had her personal life and details of her sexual life suddenly unveiled to the world because she became embroiled in a messy divorce. Now, as the out bisexual lawmaker has returned to advocacy and writing outside of Congress, one of her former colleagues that defended her is in embroiled in his own, but much different, sex scandal.

Hill finds Rep. Matt Gaetz (R-FL) “gross” and feels “betrayed” now, but the two had a cordial, somewhat-close relationship for political opponents — before the series of public scandals, an argument over Andrew Gillum, and Gaetz’s unwavering support of Donald Trump, even after the January 6 storming of the Capitol, created an irreparable wedge for Hill.

Related: Caitlyn Jenner is talking about running for governor of California as a Republican

The Department of Justice (DOJ) is currently investigating Gaetz over an alleged sexual relationship with a 17-year-old girl in 2019, where he may have paid for her to travel with him. He allegedly showed colleagues photos of nude girls and women he had sex with.

Gaetz denies the accusations, but many are wondering if the investigation will lead to charges, prison time, or the congressmember’s resignation. GOP and Trump administration officials are reportedly “gloating” that the investigation into alleged sex trafficking might take him down.

Gaetz, for his part, has maintained that this is all a conspiracy to end his career, in part because of his unwavering support of Donald Trump. He even claims his father has worn a wire to further the conspiracy, and officials tried to blackmail him with the allegations prior to the public finding out.

Hill isn’t supporting it, and she has begun to make clear why. She wrote a tell-all editorial for Vanity Fair, and is making rounds on the TV circuit, denouncing her former colleague.

Hill was the youngest LGBTQ person elected to the U.S. House of Representatives when she won office in California in 2018, unseating a Republican incumbent during midterms. She was an instant rising star in the House, earning the positions of Assistant House Whip, Freshman Co-Representative to House Leadership, and serving on three committees and five sub-committees.

But only ten months into her term, her divorce from now ex-husband Kenny Heslep turned nasty. Explicit photos of the politician were leaked to the media, along with copies of text messages documenting a “throuple” relationship Hill had with Heslep and a young former female campaign staffer.

Heslep also accused Hill of having an affair with her male legislative director, Graham Kelly. While she at first denied the affair with Kelly, she later confirmed that she did engage in a relationship with him. That was in violation of House rules, and she announced her resignation in October 2019.

Gaetz was one of the few people to defend Hill publicly, and inexplicably, despite being on the opposite aisle as her and many other conservatives using the opportunity to push to unseat someone in the other party.

“Who among us would look perfect if every ex leaked every photo/text?” Gaetz said in a tweet when Hill’s ordeal first erupted. “Katie isn’t being investigated by Ethics or maligned because she hurt anyone — it is because she is different.”

Hill now says that she thinks his entire motivation is “gross.”

In her article, she described meeting and getting to know Gaetz. Early in her term, he found her wandering in the Capitol building lost one day and helped her find where she was trying to go. Then the pair chatted each other up behind the scenes during cable news appearances, and Armed Services Committee meetings.

She wrote, “at one point I said to Matt, ‘so what is it with you and Trump? You don’t really believe that stuff, do you?'”

He apparently replied, “Well, you gotta give the fans on Fox what they want, but I do love Donald Trump… I don’t think I want to be in Congress after he’s done as president.” Hill then “stared at him blankly and shook my head in dismay,” but their “collegial (and unlikely) friendship continued.”

Gaetz even talked to Hill about Nestor Galbán, his ex-girlfriend’s younger brother that became his alleged adopted “son.” Gaetz, 38, is notoriously tight-lipped about the now-19 year old, and the nature of the relationship has led to longtime rumors that he had an inappropriate relationship with Galbán, but he had denied or outright refused to respond to allegations of those nature.

“He seemed proud of the kid,” wrote Hill, “and said he wished he could talk about him publicly, but didn’t want to expose Nestor to the shitty world of public scrutiny.

Later on, when her scandal arose, many of her colleagues and employees shied away from her — publicly, if not privately — and the Democratic caucus offered her “deafening” silence as the scandal ensued. Republicans “were having a field day,” she recalled. That is, until “the golden boy of Fox spoke up” for her: Gaetz.

“At one of the darkest moments of my life, when I was feeling more alone than I ever had, Matt stood up for me—and that really mattered,” she penned.

She stressed, however, that she “was horrified” still by Gaetz’s support of Trump and “told him so.” Their unlikely friendship continued after she resigned initially, and she even offered a defense of Gaetz when his relationship with Galbán earned public scrutiny.

But then, their friendliness faded after Hill accused Gaetz of a “bi-phobic and bullshit” response to Andrew Gillum’s subsequent sex scandal, which led to Gillum eventually coming out as bisexual. Hill and Gaetz argued, and Gaetz changed his rhetoric, but they did not talk much after that, she wrote.

“When Matt doubled down after the January 6 insurrection, I questioned how I could have ever considered us friends. But in difficult times, sometimes the unlikeliest people support you,” she recalled.

Now faced with Gaetz’s own “disturbing” scandal, Hill did not initially want to open up about her feelings about it, until she heard reports that he had shared nude photos and videos with lawmakers on Capitol Hill. She said “sometimes it’s a tough call. But sometimes it’s not,” about publicly opposing a former ally.

She said that “if there is even a fraction of truth to these reports, he should resign immediately,” she demanded. Later, she elaborated on those feelings in on-air appearances.

“I think it is gross. Knowing now that that could have been just because he was trying to cover up for whatever his own indiscretions were … is just gross.”

“This is a classic example of where men’s behavior is far and a way treated differently than women’s is,” she told CNN’s Erin Burnett on her show “Outfront.”

She also appeared on MSNBC’s “All In with Chris Hayes,” telling the show’s host, “I feel betrayed by him, and I have to wonder about his motivations for defending me in the first place.”

“He should resign immediately,” the ex-Congresswoman said. “The Ethics Committee should open an investigation immediately and for some reason they haven’t, when they opened one on me based on a tweet or a Facebook post from my bitter ex-husband.”

“Honestly, Gaetz could probably get indicted and run for reelection and still win,” she added.

"I think it is gross," says fmr. Rep. Katie Hill, as she recalls Rep. Matt Gaetz defending her amid her personal scandal.

"Knowing now that that could have been just because he was trying to cover up for whatever his own indiscretions were… is just gross." pic.twitter.com/fkdEILs0GJ

“I feel betrayed by him. And I have to wonder about his motivations for defending me in the first place,” says @KatieHill4CA on Matt Gaetz. pic.twitter.com/SDPR6dQGiM

After leaving office, Hill wrote a book about her experiences in Congress entitled She Will Rise: Becoming a Warrior in the Battle for True Equality. She argues in the book that it was “rampant misogyny” that led to her exit from politics, citing men in positions of power who have been accused of sexual harassment and sexual assault but who haven’t been forced from office in what she calls a “double standard.”

The lawsuit was dismissed last week by a Los Angeles judge who agreed with the defendants that publishing her naked pictures were protected by the First Amendment because they were material considered to be of “public concern.” Hill and her lawyers may prepare to appeal the decision.

She also obtained a restraining order against Heslep in 2020.