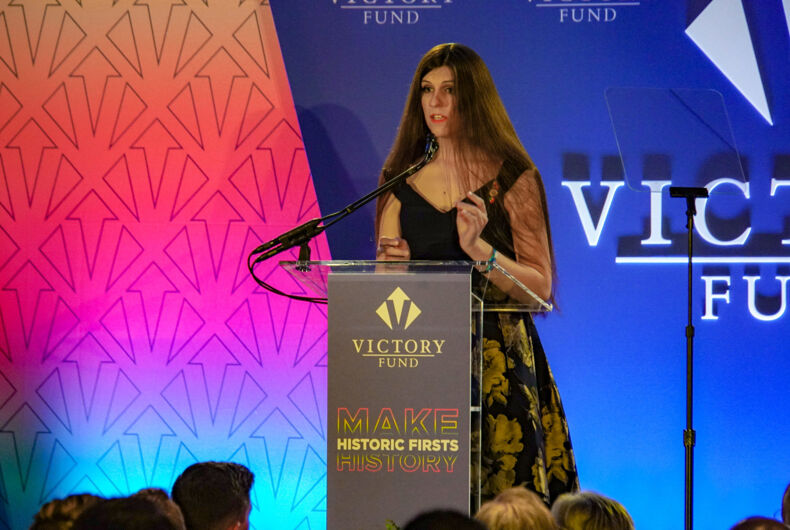 Virginia Del. Danica Roem (D), the first openly transgender person to serve as a state legislator, opened up to the New York Times about the effort she led to ban the so-called gay and transgender “panic” defenses in her state, especially in light of the anti-trans proposals being pushed across the country.

She also discussed what it is like to be trans and an elected official, and she reiterated her message to other trans people: run.

Roem, 36, is serving her second term as a state delegate in the Virginia House of Delegates. She previously worked as a professional journalist and writer for 10 years prior to her first election in 2018. In 2020, she became the first trans person reelected to a seat in a state legislature.

When she first ran for her seat representing the state’s 13th district, Virginia was an entirely Republican-controlled state. Now, the state’s governorship and legislature are Democrat-controlled. Roem foresees that possibility for other states in the south such as Georgia and North Carolina.

“But that is the long-term project,” she told the Times in an interview published today. “That is not a short-term project.”

She explained that other legislators and organizers in the south are “on defense right now” because “outside the Mid-Atlantic, it’s really hard for us to pass good bills instead of just simply having to work against bad bills. So it’s going to be a while.”

Asked why she believed there was so much of a focus on anti-trans legislation in the Republican Party, Roem explained that the discourse over trans rights is “turning a civil rights discussion into: ‘They’re trying to take things from you. They’re trying to change what you know. They’re trying to uproot social norms and things that we enforce. So we have to fight them, so that we can reclaim America.'”

“So then, are you more concerned with being insufficiently conservative? And that’s the problem here. That’s the incentive in a lot of these states.”

She further explained, “your goal isn’t to necessarily pass good governance bills. It’s: ‘What gets people animated the most, so I can be in this seat for the longest amount of time?'”

Asked how individual voters could combat these efforts, Roem’s answer was to, most of all, “win federal elections.”

“You have to retain the presidency — you absolutely have to retain the presidency, because of judgeships. And you have to have a Senate majority, if nothing else, because of the confirmation process for judges,” Roem explained, bringing up how then-Senate Majority Leader Mitch McConnell blocked many federal appointments from the Obama administration that were then filled by the Trump administration, many who will be “much more hostile” to the LGBTQ community.

She also emphasized that she encourages trans people to run for office, noting that she had to be recruited to run, and women are more likely to be asked to run for office compared to men who more often take the initiative.

“I hear from trans people — trans teens, trans kids, trans adults — all the time. It’s one of the things that comes with being the first out transgender state legislator in the country,” she told the Times. “But now, by the way, we have at least eight. You are seeing a substantial shift in policy where we’re no longer strictly on defense.”

She noted that most of the comments she receive from peers and constituents are no longer focused on her identity. “Professional working relationships have allowed me to pass 23 bills,” she explained.

“You know, I know how to work with my colleagues. I used to get a lot more comments my freshman year, but apart from a snide remark here or there, it’s nothing remarkable.”

In 2020, Roem similarly stated in an article for LGBTQ Nation, “Representation is power and power is influence. Whether in politics or life, when you have a seat at the table, you set the tone and make the rules…