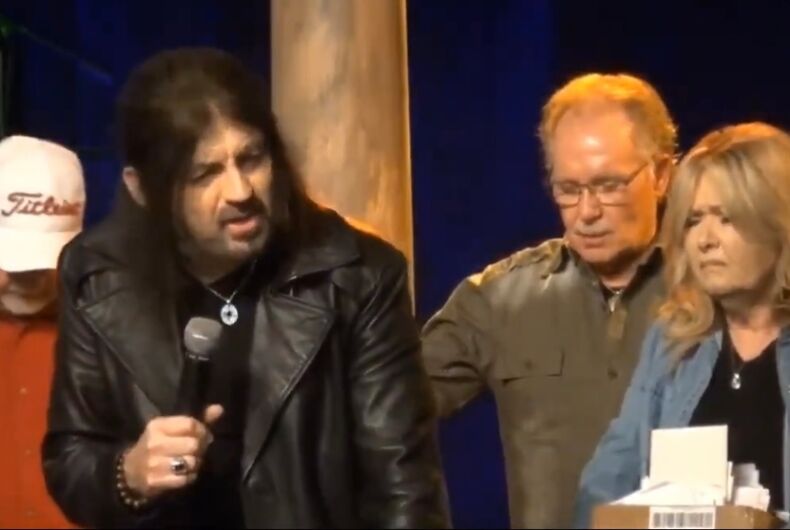 Robin D. Bullock (center, in black) and his churchgoersPhoto: Screenshot

So Bullock made a revelation, which he had from God directly, that “homosexuality is a cover up for an evangelist.”

Related: Republican caught saying if gays were put on an island “they’ll be gone after 40 years”

Extremism watchdogs Right Wing Watch documented Bullock’s comments from the end of his two-plus hour church service. Bullock preaches at his own Church International, streaming online as “The Eleventh Hour.”

“As far as homosexuality, this is what I heard. I’m going to tell you something, and I want everyone to take heed. This is what I’ve heard from the Lord,” Bullock said.

“Homosexuality is a cover up for an evangelist,” he declared.

Bullock believes that being gay is just behavior caused by a ‘spirit’ keeping an evangelist from being their true selves.

“People that are in that lifestyle are really called [to be] evangelists by the Lord, and this is a spirit that attacks that to stop it.

“So, instead of just praying a lot of things right here, what I’m led to do is to call forth the gift of evangelism that God has placed on their lives, to come forth and it will drive that other out.”

He then began “calling” for the “gift” to “come forth” in his followers seeking healing.

“I call for the gift of evangelism, that call from God that you – those that are bound up in homosexuality – that the evangelist anointing will come upon their lives because that’s what they are!” he declared.

Bullock describes the “gift” as being kept in a tomb. “We say to the evangelist inside the homosexual, ‘Come forth, come out of that tomb, and come forth in Jesus’ name.’”

Bullock is an avowed supporter of former President Donald Trump and has gone as far as to say that current President Joe Biden “doesn’t exist.” He has also claimed that he and his fellow “prophets” have the power to call Trump back into the presidency whenever they wish. He even encouraged his churchgoers to publicly refer to him as President.

“I know they will say, ‘Really? Why would you say that in public?’ Because he is!”

In November 2020, he blamed COVID-19 and the ensuing coronavirus pandemic on people that supported Hillary Clinton’s 2016 campaign for President.