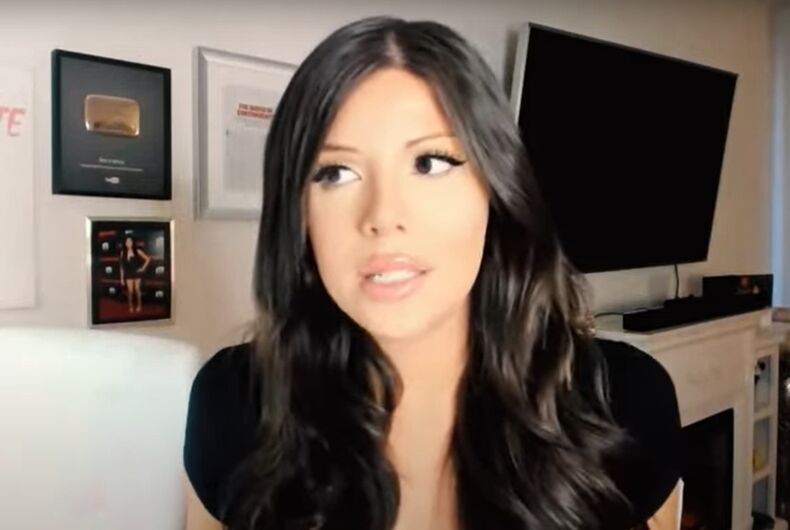 Blaire White, defending her existence to her friendsPhoto: Screenshot/YouTube

Transgender Trump supporter Blaire White was viciously smacked down by fellow conservative in a panel discussion who told her to “grow out your mustache and tell people not to live like you.”

White rose to fame on YouTube with her videos denouncing feminism, Black Lives Matter, and even LGBTQ equality, making her one of the best-known conservative trans people in the U.S.

She supported Donald Trump in 2016 and, like many conservative LGBTQ people, she claims that anti-conservative bias is more prevalent than anti-LGBTQ bias.

She appeared in a panel discussion about LGBTQ rights with three other Republicans, which devolved quickly.

“I don’t know how much you know about me, but I’m probably the most vocal anti-children transitioning person on the internet,” White said.

“Great! The best thing you can do for us is grow out your mustache and tell people not to live like you,” Witze said. Even rightwing commentator Karlyn Borysenko in the upper-left appears shocked by Witze’s statements.

Like pretty much every prominent conservative LGBTQ person, White insists that conservatives accept her more than liberal LGBTQ people do.

In 2017, White wore a red MAGA hat in LA and posted video online claiming that a leftwing activist knocked it off her head and threw a drink at her. Snopes debunked some of her claims and couldn’t determine if parts of the video were staged.

“I am a transgender woman who lives my life and goes out every day as myself,” White said at the time. “I have never been assaulted for being trans. I’ve never had anyone on the street say anything nasty to me about being trans. But I was assaulted for wearing a Trump hat. I think that speaks for itself.”

The full panel discussion is below.