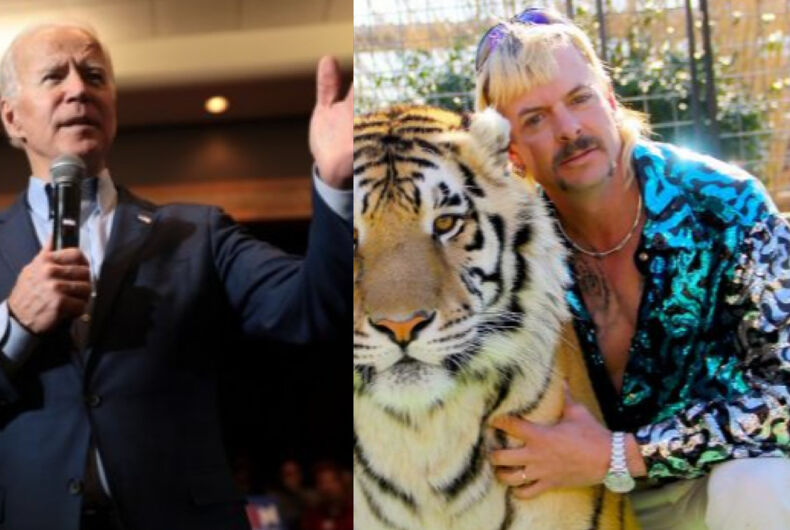 Simon & Schuster has announced that it will publish the memoirs of “Tiger King” Joe Exotic, the self proclaimed “gun-toting, gay redneck” tiger breeder, former zoo owner and polygamist who became a household name last year from the Netflix docuseries Tiger King: Murder, Mayhem and Madness.

Tiger King: The Official Tell-All Memoir will be published on the Gallery Books imprint. The reported publication date for the 320-page book is November 9.

Joe Exotic, known legally as Joseph Allen Maldonado-Passage, is currently serving a 22-year sentence in a Texas prison for scheming to hire a hit man to kill his longtime rival, animal activist Carole Baskin, and for violating the Lacey Act and the Endangered Species Act. He wrote the book behind bars.

Simon & Schuster says on its website that in the book, “Joe pulls back the curtain on the man behind the headlines. From a tragic childhood riddled with abuse to his dangerous feuds with big cat rivals and beyond, nothing is off the table.”

They promise that the memoir will be “no holds barred” as it follows “his outlandish journey from Midwestern farmer to infamous Tiger King, and finally, to federal inmate.”

According to publishersmarketplace.com, Exotic signed a “six-figure” contract for the book, and Simon & Schuster is also acquiring the audio rights.

Shown at the start of the COVID-19 pandemic last year, when many people were in lockdown, the Tiger King documentary was one of Netflix’s most watched programs as well as one of the most tweeted about moments throughout 2020. But in an interview, Exotic told E! News from inside prison that the Netflix show “has not come close to telling my life or even the truth about why I’m in here.”

Joe Exotic’s support for former President Donald Trump became well known, and eventually, so did his expectation that Trump would pardon him before leaving office in January — especially after Trump appeared to entertain the idea during a press conference, as did other conservatives.

Unfortunately for him, it didn’t happen. When Trump left office, his expansive list of last-minute pardons and clemency grants did not include Exotic.

Exotic’s supporters had been so confident that Trump would pardon him that they rented a limousine to pick him up from prison and pre-recorded a thank you video to send to the White House.

Exotic, who turned 58 on March 5, confirmed that he’s holding nothing back in his autobiography.

One example of Exotic not holding back came when it was clear that Trump wouldn’t pardon him, and Exotic tweeted that he was “too innocent and too GAY” for Trump to set him free: “His corrupt friends all come first,” he said of Trump.

I was too innocent and too GAY to deserve a Pardon from Trump. I only mattered to Don Jr. when he needed to make a comment about me to boost his social media post. Boy were we all stupid to believe he actually stood for Equal Justice? His corrupt friends all come first. pic.twitter.com/ysGfwnqlHi

…. The inmates here at FMC are also very disappointed I didn’t get this pardon because they all say I don't belong in here.

People, I am a Libertarian, I don't support anything of what any of them do. Does anyone have any suggestions on what the hell I should do to get myself out of this mess? What choice do I have other than to hope to hell someone they appoint in a high position now might listen.

Exotic previously filed a $94 million lawsuit against law enforcement for allegedly targeting him due to his sexual orientation.

The former zookeeper’s complaint alleges authorities placed “a generic species” on the Endangered Species List and not a specific breed of tiger solely so they could arrest him to promote their “animal rights agenda.” He says he was targeted “because [he] is an openly gay male with the largest collection of generic tigers and crossbreeds.”

His lawsuit seeks $15 million for false imprisonment and selective enforcement, plus an additional $75 million for loss of property and research. He also seeks restitution for the cost of boarding all of his big cats while he has been in jail.

Exotic said he “humanely euthanized” the five adult tigers he was convicted of illegally killing.

Exotic is married to Dillon Passage, who told People magazine before the Simon & Schuster announcement that the draft he read brought him to tears. “It’s a really heartbreaking story, and a lot of people are going to see a different side of Joe because of this,” he said.

Passage told People, “I cried. I cried and cried and cried. It was so tragic because it’s nothing he ever spoke to me about in person. It’s very personal and it’s definitely a story that nobody thought would have happened. It’s absolutely tragic. And Joe really gets his story out there and lets people know what happened to him.”

He has expressed his hope to receive a Presidential pardon from another Joe — animal lover and current President Joe Biden. “President Biden and VP Harris are going to have to hold some Federal Agents and witnesses accountable to even come close to showing America they care about Justice,” he recently tweeted.

…that put me here. When I am done telling the truth people should be ashamed. Not one person came forward until the Netflix series came out and they could profit from it.#JusticeForJoeExotic #freejoeexotic #helpfreejoe

Between the book and the new evidence coming out, there better be someone going to jail for Obstruction and Perjury. President Biden and VP Harris are going to have to hold some Federal Agents and witnesses accountable to even come close to showing America they care about Justice pic.twitter.com/Vwf3Rykuvo