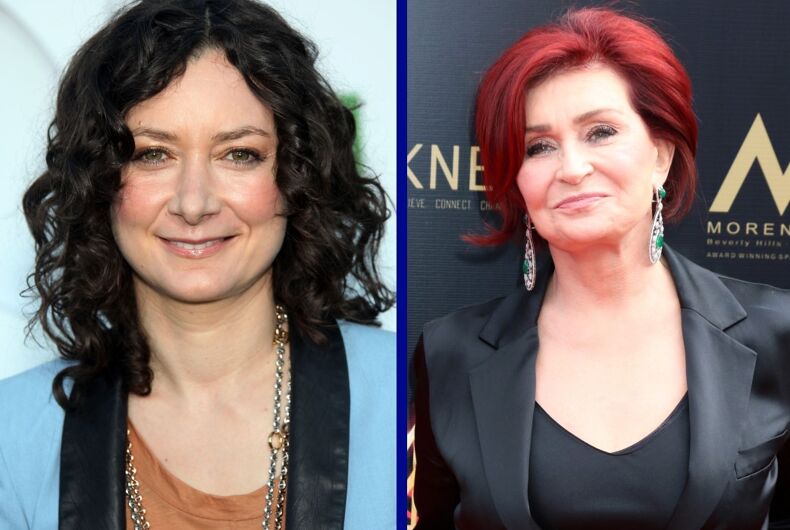 Reality personality Sharon Osbourne is facing several accusations of making homophobic and racist comments about her coworkers on CBS’s The Talk, making the daytime talkshow an allegedly “toxic” workplace.

Sources told journalist Yashar Ali that she called a lesbian “pussy licker” and “fish eater,” referred to a Chinese American woman as “wonton” and “slanty eyes,” and even co-host Leah Remini is accusing Osbourne of using anti-Italian slurs against her.

The Talk is currently on hiatus following an explosive exchange between co-hosts Osbourne and Sheryl Underwood, where Osborne demanded Underwood explain how British TV host Piers Morgan’s comments about Meghan Markle were racist.

“Don’t try and cry, because if anyone should be crying, it should be me,” Osbourne shouted at Underwood, who is Black. “You tell me, educate me, when you have heard [Piers] say racist things. Educate me! Tell me!”

Now more accusations are coming out about Osbourne’s treatment of coworkers from different ethnicities and identities. Former co-host Remini and 10 unnamed sources said that Osbourne has a history of making offensive statements.

Osbourne has been accused of trying to rally her co-hosts to remove other co-hosts. For example, she allegedly objected to Julie Chen getting any leadership role in the show.

That included trying to get Remini to back her up against Chen. Remini said Osbourne told her: “I mean, who the fuck does slanty eyes think she is? She shouldn’t be pillow-talking with our boss.”

Remini said Osbourne also told her that executive producer Sara Gilbert, who is a lesbian, should be helping her deal with Chen.

“Why won’t the pussy licker do anything about the wonton?” Osbourne allegedly said about Gilbert and Chen. “Why won’t the fish eater be part of this discussion? She’s the fucking executive producer.”

Remini, who is of Italian descent, said that Osbourne also called her a “wop” and “guinea.” Remini left the show after the first season.

Osbourne also allegedly tried to get former co-host Holly Robinson Peete kicked off the show for being “too ghetto,” Robinson Peete tweeted earlier this week.

I’m old enough to remember when Sharon complained that I was too “ghetto” for #theTalk…then I was gone💨
I bring this up now bc I was mortified watching the disrespectful condescending tone she took w/her co host who remained calm & respectful because…she HAD to🤦🏽‍♀️ 🤷🏽‍♀️#fbf https://t.co/7pnCnhM5rf pic.twitter.com/CXR4DzvlEZ

And video of her saying that Meghan Markle isn’t Black has also resurfaced online.

Sharon Osbourne on Meghan Markle in 2018:

Remini said that she regrets not saying anything about Osbourne at the time, calling the show a “toxic” workplace.

“Not only did I do nothing about the racism and bullying I was receiving and witnessing, I was party to it,” she said. “I had to own up to my own ugly.”

She ended up getting fired after the first season.

Osbourne issued an apology on Twitter for her on-air outburst against Underwood.

“I have always been embraced with so much love & support from the black community & I have deep respect & love for the black community,” she tweeted. “To anyone of color that I have offended and/or to anyone that feels confused or let down by what I said, I am truly sorry.”

But, through her publicist, she denied Remini’s accusations, calling her a “disgruntled former talk show host.”

“Sharon is disappointed but unfazed and hardly surprised by the lies, the recasting of history and the bitterness coming out at this moment,” the publicist said in a statement.

It is not yet known how long The Talk will be on hiatus or if Osbourne will be returning with the show.