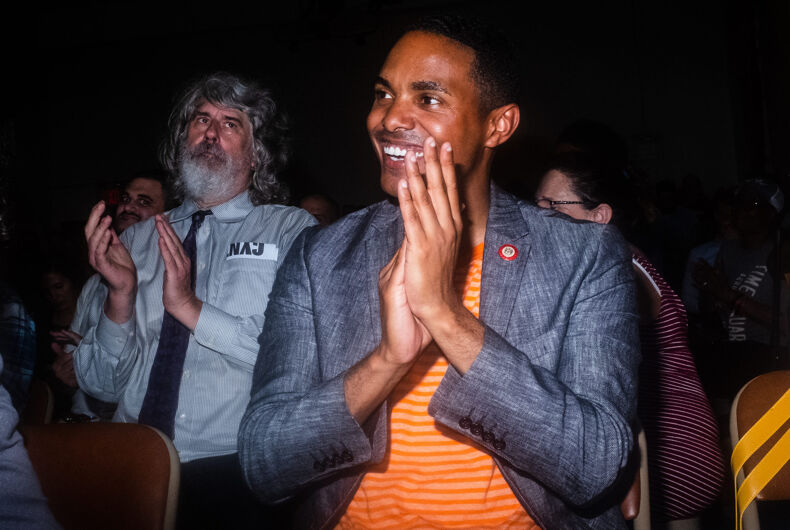 Ritchie Torres, at an event for activist Ady Barkan in Parkchester, the Bronx on August 7, 2018.Photo: Jennifer M. Mason / Shutterstock

Rep. Ritchie Torres (D-NY), the first out gay Afro-Latinx member of Congress, is introducing legislation that will explicitly include LGBTQ-owned businesses in federal regulations for financial institutions regarding data and other information they compile.

The LGBTQ Business Equal Credit Enforcement and Investment Act seeks to amend section 1071 of the Equal Credit Opportunity Act, which requires financial institutions to maintain information on credit applications submitted by minority and women-owned small businesses to the Consumer Financial Protection Bureau (CFPB). This is how the Bureau and other government entities enforce fair lending rules and track business and community development.

If Torres’ proposal passes, the bureau will extend those uses for LGBTQ-owned businesses as well.

Torres told NBC News, “I partnered with the LGBT Chamber of Commerce to persuade America’s largest city to adopt a certification program for LGBTQ enterprises,” referring to the recent change enacted in New York City earlier this year.

He pushed the Big Apple to include LGBTQ businesses, and he introduced a legislative proposal in 2019 as a member of the New York City Council to that effect. Now, the city officially recognizes businesses owned by LGBTQ people as part of their minority & women-owned business enterprise (MWBE) programs, allowing them to access billions of dollars in city contracts, contract procurements and opportunities, in addition to accessing priceless resources for historically-disadvantaged enterprises.

This legislation he is preparing to introduce serves as “a natural complement to the Equality Act,” the landmark pro-LGBTQ legislation that will include gender identity and sexual orientation in anti-discrimination laws if adopted into law, such as those that outlaw discrimination in credit and financial services.

Torres says “that’s a floor, rather than a ceiling.”

“We have to see to it that LGBTQ enterprises have their fair share of access to capital.”

Similar legislation was proposed by former Rep. Harley Rouda (D-CA) in 2019, amidst the last session of Congress, but he lost reelection and the proposal was not bought to the floor.

Torres is happy to pick up the battle.

“Without the kind of rigorous reporting required by my legislation, we have no enforceable means of holding the financial system accountable for serving the credit needs of LGBTQ enterprises,” he explained.

“The logic here is simple: Transparency will strengthen the incentive for the financial community to extend capital to LGBTQ businesses.”

Torres won the election to represent New York state’s 15th Congressional District, which encompasses the South Bronx, in November. He was sworn in as one of the first Black LGBTQ members of Congress, along with Mondaire Jones.

Torres overcame homophobic and anti-LGBTQ attacks both during the competitive Democratic primary and the general election.

Longtime friend and partner of NGLCC @RitchieTorres plans to reintroduce a bill to ensure that LGBT-owned businesses are counted by financial institutions in data! More here: https://t.co/Zx4Zh74EFL

Are straight men who have sex with men actually straight?