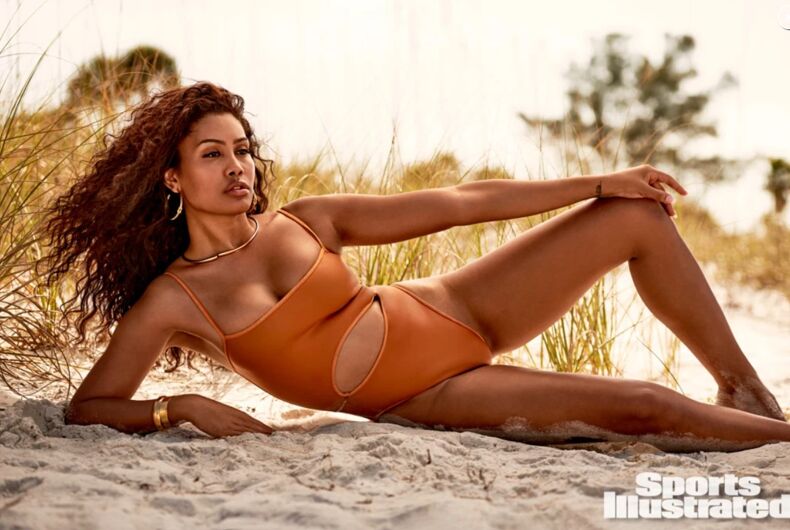 Model Leyna Bloom will be the first transgender woman of color featured on the cover of Sports Illustrated‘s swimsuit issue, she just announced on Instagram.

“My autonomy and my anatomy are beautiful,” she told the New York Times. “I want people to see that, and to see that you can be respected, appreciated and loved regardless of your body shape, sexuality, and the color of your skin.”

“I’m promoting something that has been missing in the world: trans beauty in all shapes and all sizes,” she continued. “I’m representing Filipina, I’m representing Black, I am representing people who have been immigrants. For them, I’m a vessel of change.”

Originally from Chicago’s South Side, Bloom is the mother of the New York City mother of the house of Miyake-Mugler in the ball scene.

In 2017, she walked the runway for Chromat during New York Fashion Week and for Tommy Hilfiger x Zendaya during Paris Fashion Week in 2019. She has appeared on the cover of Vogue India.

Bloom starred in Port Authority, a film that was featured at the 2019 Cannes Film Festival that was set in New York’s ball scene.

Now she’s going to be on the cover of Sport’s Illustrated in July.

“This is what it looks like to be in full bloom,” she wrote to her fans on Instagram.

When asked what she thinks about criticism of the swimsuit issue for sexism, Blooms said, “This is a way of reaching the top of the food chain. Let’s at least have this moment and say that we had it, and then we can go on to dismantle it.”

J Lo & Dwyane Wade love this dad who stood up for his trans daughter. You will too.