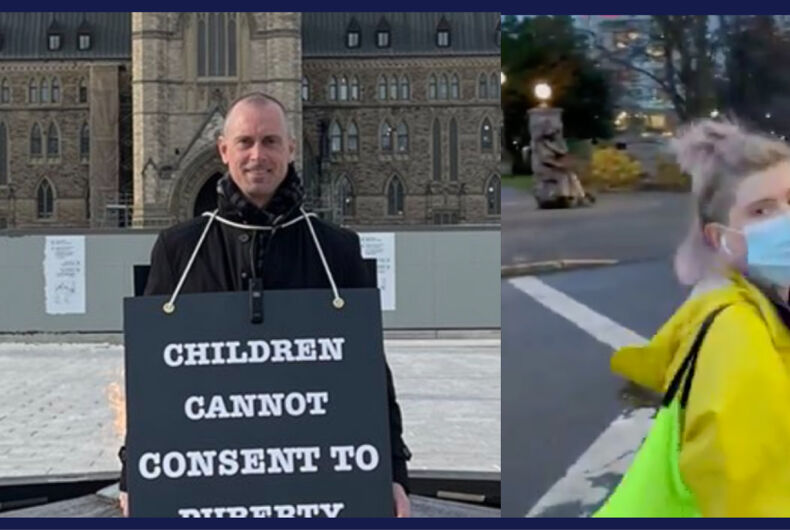 Chris Elston (left) and the unidentified woman he recorded while followingPhoto: Screenshot/Twitter

Chris Elston, a J.K. Rowling superfan and insurance broker in Vancouver, has once again made news for his behavior toward a woman.

Elston first made headlines last year when he bought a billboard in Vancouver and put up a banner that said, “I ❤️ J.K. Rowling” in white letters over a black background. He made clear to note that he was showing support of the author in light of her comments on transgender people, and the billboard didn’t even mention any of Rowling’s books.

Related: Anti-LGBTQ politician who proudly opposed conversion therapy ban is kicked out of his party

The billboard was vandalized within its first full day on display. By its third day, it had been covered up completely in paint.

Just weeks later, Elston showed up to trans politician Nicola Spurling’s campaign event wearing a sandwich sign that said “I ❤️ J.K. Rowling” on one side and “Gender ideology does not belong in schools” on the other side as he harassed the group. He promised to show up at another Spurling event the next day.

The next day, Spurling posted a video of Elston standing in the middle of a crowd and demanding that everyone move back away from him so that they would be six feet away for social distancing. He was not wearing a mask.

It wasn’t long before Elston was placed under arrest “for antagonizing protestors and even attempting to punch someone.” He called the claims that he attempted to punch someone “fake news” and would later say that “all the officers on hand claimed to see nothing.”

Last week, Elston returned to Twitter to post a video that apparently he recorded of himself following a woman for blocks, demanding she answer questions about gender to him.

She wore a mask, but she noted that he was not wearing one. In a turn of events, she had to continually ask him to keep his distance. “I work in sexual health, I’m a gender consultant, and you’re a piece of shit,” she turned and said to him at some point.

Elston then asked if the woman could “educate” him on things like puberty blockers and gender ideology.

She responded, “it’s not my job to do that because you’re not paying me,” she responded. “Why don’t you look at Google? Just go on Google.”

He then claimed that he had tried, and she quipped that he must not “have a brain to process any of that information.”

He tries to get her to reveal her place of work to him, and the unidentified woman just repeatedly replies, “fuck you.”

“You should go fuck yourself and worry about something that matters,” she tells him. “Wear a mask!”

If Bill C-6 makes it a criminal offence to try to convert someone’s gender identity, can we charge teachers and counsellors who tell our girls they might be boys? 🤔

Just to clarify, this isn't me. This appears to be an employee of a sexual health clinic. I took the video from Chris' own Twitter. He has had me blocked for around a year now because I told him about trans people being supported by The BOFA act 1969.

Correction to what I said earlier. Here are some of the more feminist leading GCs calling out Chris the sexist. Thanks to whoever linked this.

GCs, maybe consider why these lot (like Chris) are never on the pro-trans side of things.https://t.co/ohrbgDuUSD

In posting the video on Twitter, Elston tried to equate gender-affirming healthcare with “conversion therapy.” He claimed that under Bill C-6, a bill currently under consideration that seeks to outlaw so-called “conversion therapy” in Canada, people will be able to “charge teachers and counsellors who tell our girls they might be boys.”

He said, “I’d love to file private prosecutions against a few gender consultants and endocrinologists” if that were the case. In his next tweet, he added, “she actually called the police on me,” and claimed the police officer “rolled his eyes” when he arrived.

She actually called the police on me. I posted the video of me talking to the police, too. He took one look at my video of her and rolled his eyes, not pleased she wasted his time.

Later on in the week, Elston would claim he was attacked while protesting the bill in Montreal. RT reported that Elston claimed “black-clad assailants” had “allegedly punched him, stole his camera, and broke his arm him with a traffic cone.” In his version of events, he claims all he did was pursue a “peaceful conversation” with someone when “about seven ‘thugs'” surrounded and chased him.

RT described him as someone that “has pushed some politically sensitive buttons” before.

Another “gender critical” person, journalist Anna Slatz, returned to this video, re-posting it on Twitter and saying the video made her “extremely uncomfortable.”

“It does not matter that she is a TRA,” she said, referring to an acronym used by anti-trans people online to refer to ‘Trans Right Activists.’ She declares, “this is provocation.”

“We do not know the full story of what happened the night of his assault. If it was ANYTHING like this — where he is, for MINUTES on end, pursuing people who are trying to get away from him…. It is theatre. Not activism.

“He was trying to provoke a filmable response,” she adds.

We do not know the full story of what happened the night of his assault.

If it was ANYTHING like this — where he is, for MINUTES on end, pursuing people who are trying to get away from him…. It is theatre. Not activism.

He was trying to provoke a filmable response.

You literally followed a woman around asking her to educate you instead of leaving her alone and looking on google. You’re the type of man that women are afraid of. Congratulations. https://t.co/qx7OolZUlW

Following a woman at night to harass her? Have a think about your methods, sunshine. From here, you come across like a dangerous wrong'un.

What the actual fuck is wrong with you?

You think it's okay to stalk and verbally harass someone on the street?

And she makes it clear that you're not wearing a mask so you're a health threat as well as a general danger.

love to harass a woman in bad faith and then post a conveniently cut clip to make her look like the bad guy. Just stunning stuff, mate.

She's absolutely correct. She owes you nothing, no explanation, none of her time. Leave her alone, leave trans people alone and put a goddamn mask on

Ft. Lauderdale’s out mayor will honor an anti-LGBTQ hate group because it’s time to “let go”