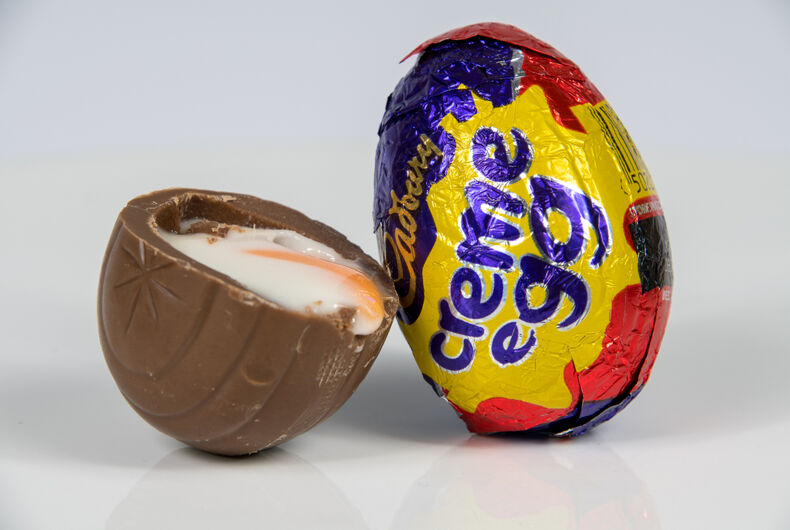 Social media hardly has a filter, so everyone can spew their poison there. It’s the difference between disgusting and charming.

I recently posted two videos on my YouTube channel in the framework of my Ph.D. research “‘Marketing the Rainbow.” There are some 1,000 clips there, which illustrate the theme: from the first historic clip of Dutch insurer Amev from 1992 (the first TV commercial in the world which features LGBTQ people) and the international renowned IKEA video from 1994 to remarkable and sometimes shocking campaigns from Heineken and Google. On average they get around 5,000 views, with peaks to 50,000, but in this instance, no holds were barred.

Related: Gay couple claps back at haters upset over how they shared a Cadbury cream egg

The two videos in question were from Doritos Mexico and the jubilee video of the Cadbury Creme Egg from the U.K.

Cadbury (est. 1824) is part of Mondelez International; after Mars, it is the largest candy manufacturer in the world – a real British company within an American conglomerate.

Because the uber-sweet Crème Egg has been around for 50 years (actually since 1923, but it was rebranded in 1971), Cadbury had the idea to create the “Golden Goobilee” and make a little film with all the ways you can eat the treat. Because if you thought you could just unwrap and consume it, you’re wrong!

Annually, 200 million Cadbury eggs are sold in the U.K. alone – and another 300 million abroad.

What do you think? Corny? Amusing? Over the top? Shocking? Disgusting?

Of course, I am mostly referring to the few seconds during which a male couple is seen, merrily swirling around and sharing their egg. Their lips barely touch. It is a real-life couple – Callum Sterling and Dale K Moran – and it was the first time in almost 200 years that Cadbury showed some LGBTQ diversity apart from a four-second gif from South Africa (an animation of two guys on a rollercoaster).

The Goobilee video was mainly meant for online use but was shown on TV in the U.K. as well. Cadbury published it on their own YouTube channel and has raked up close to 1 million views now. They switched off comments, and the display of the like/dislike ratio – and with reason, if they got the same reactions that I got.

My phone was burning up with the constant stream of notifications that someone left a comment – some 2,000. The number of views has reached 150,000. And yes, many people were disturbed by the male couple. From a regular “yuk” to extreme fulminations, “fetishizing of queer people”, a number of “Sodom and Gomorrahs” next to Bible quotes to save me and Cadbury from purgatory. It would be harmful to expose children to “this”.

The word “sexualize” appeared a huge number of times, even “too over-sexualized.” Many swore to never buy anything from Cadbury again. And frequently: “I have nothing against gays, but…” – you know the drill. For something that is not even a kiss.

I have had to report over 300 people to YouTube for severe hate speech or bullying and removed another 250 comments that were just too negative. I do not mind a dialogue and not everyone has to like the clip, but I never saw the like/dislike ratio develop like this. At first, it was 1:1 for a long time up to around 1,400 each, but by now it is 1,800:2,200, so the dislikes are outnumbering the likes with a big margin.

BTW: a fair number of people were disgusted just because the egg was shared, while others were funnily pretending to be homophobic, but then gave it a nice twist by expressing their aversion to the girl dipping her finger in the egg.

One Million Moms, an American hate group with a few thousand members who are not just bad in math (there are only 4,200 followers on Twitter) but basically are against most things, called for a boycott. They called on their members to protest against the way Cadbury celebrated Easter. And mind you, this is an organization in the U.S.A., where the commercial was not even broadcast.

“A portion of each sale goes to help finance Cadbury’s social agenda that has nothing to do with chocolates and candies.”

Luckily, their boycotts always backfire. They launch about 15 a year, and they cannot eat, drink, do or use dating sites, children’s toys, HoneyMaid, Target, Walmart, JCPenney, Coca-Cola, McDonald’s, General Motors, and other big brands that have their “attention.” And all to no avail, so bring on the indignation!

But gays were angry too: the way they saw themselves represented was not to their liking. Ah, it is not easy to please everyone.

At the same time, I published the “Christmas commercial” from Doritos Mexico. This is a brand from the Frito-Lay/PepsiCo conglomerate. Doritos had a rather up-and-down history marketing to LGBTQ consumers – from a dubious gay tease with Enrique Iglesias and homophobic bloopers in Brazil to immature jokes – until they improved their way in 2015. This was, not coincidentally, the year that same-sex marriage became the law of the land in the U.S. and the floodgates opened for recognizing and targeting LGBTQ consumers.

In 2015, they presented rainbow Doritos (well, 5 of the six colors, as they merged yellow and orange): $10 for a bag, only available online, and proceeds went to It Gets Better. They sold out in no time (the “million” mothers shouted foul for getting a gay agenda shoved down their throats and helped drive sales). Since then, Doritos has consistently remained loyal to decent LGBTQ representation and committed themselves to the LGBTQ community under the theme #PrideAllYear.

And then there was the short film “El mejor regalo” (The best gift).

This adorable lifestyle commercial meanwhile has well over 200,000 views on my channel (a record), but I didn’t notice that right away since I didn’t receive many notifications about comments. By now, there are 365, but contrary to the Cadbury video, 95% are positive. The likes/dislikes ratio is higher 3,200:70, so where Cadbury is 1:1.25, Doritos gets 45:1.

The background: the clip is based on a true story, where a father suspects his son to be gay and asks for advice on Reddit. He is OK with it but does not know how to bring it up. The story has a happy ending.

What’s remarkable is that Doritos hardly features in the clip: only in the beginning, when the friend buys some articles in the gas station. This video is pure branding, loading an emotion under #PrideAllYear.

The original video got more than 14 million views in two weeks, and the likes ratio was very favorable there too – 25:1. I got a lot of traffic because I found English subtitles, which were wanted by non-Spanish speakers. But while Cadbury gave me a full-time job moderating the post, this was not at all the case for Doritos.

Both products are targeted mostly at youth or young adults. Where Cadbury dedicated a few seconds to two adult men who clearly have a sexual relationship without really picturing it, Doritos brought a two-minute story that was exclusively about young gay love. But while conservative Mexico exploded into applause, Brits and Yankees collectively barfed and cursed. In both cases, the media attention has been massive, so the free publicity is huge.

The question is if all those haters will harm the brand, or if it is only social media blah blah. My guess is the latter. Social media has no filter, so what you say is not necessarily what you do.

Alfred Verhoeven is a Ph.D. researcher studying LGBTQ marketing. He lives in Amsterdam.