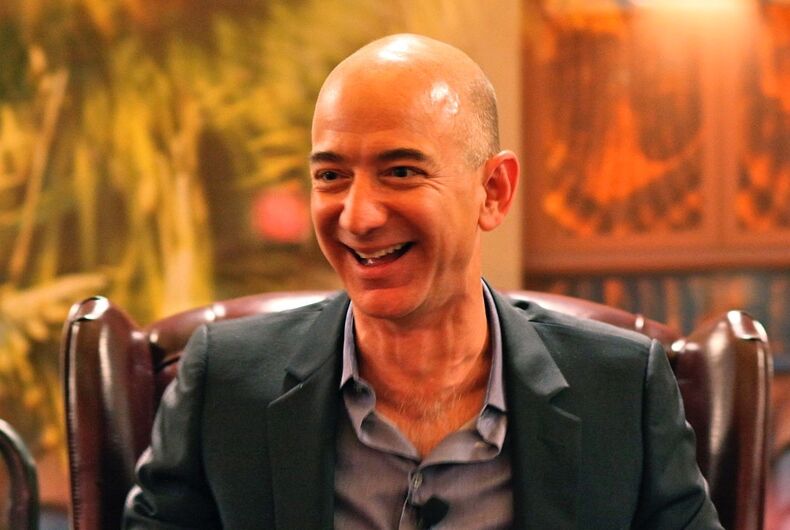 An anti-LGBTQ activist’s book “critiquing” trans people was once a top-seller on Amazon’s charts tracking sales of LGBTQ books. Then, Amazon stopped selling it.

The author argued that the mega-corporation had “erased” his book by deciding not to offer it, and this caught the attention of four conservative U.S. Senators. They wrote a letter to Amazon to complain, and so the company explained: they’re no longer selling books that claim being gay or transgender is a form of mental illness.

Related: Twitch tried to be inclusive using the term “womxn.” Instead they alienated LGBTQ people.

The book in question is entitled When Harry Became Sally: Responding to the Transgender Moment, written and published by Ryan T. Anderson in 2018. The book claims that being transgender is a mental illness based on the narratives of “ex-transgender” people.

Anderson worked for the Heritage Foundation, an anti-LGBTQ group where he reportedly worked closely with then-Vice President Mike Pence, who is now the organization’s newest name-recognized employee. Anderson is currently President of the religious right think tank Ethics and Public Policy Center.

Anderson also co-wrote What Is Marriage? Man and Woman: A Defense, advocating against same-sex marriages, in 2012. He previously claimed it’s harder to admit to being an evangelical Christian than it is to come out as an LGBTQ person.

According to Anderson, an article fact-checking the book in the Washington Post was a “hit piece” and it was “attacked twice” in the New York Times opinion section. Still, it continued on being sold until last month, Anderson explained in an editorial written for First Things — a conservative website and journal from the religious group Institute of Religion and Public Life.

He claims, “three years after publication, in the same week that the House of Representatives plans to ram through the Equality Act” — which he calls “a radical transgender bill amending the Civil Rights Act of 1964” — “Amazon has erased my book opposing gender ideology from its cyber shelves.”

He said he was not notified and had to follow up with the company to learn that his book violated the marketplace’s offensive content rules. Anderson’s publisher, Encounter Books, later revealed they were notified.

Anderson called this canceling due to “a heretic-hunting Left” and demanded that his book continued being sold, even if Amazon doesn’t agree with it, because otherwise “they have a lot of explaining to do about why they carry Adolf Hitler’s Mein Kampf.”

“Conservatives need to get over the misguided belief that private businesses can do whatever they want. That isn’t true,” he claimed. While warning readers to beware “Big Government” and “Big Tech,” he argues Amazon should be forced to sell his book because “all liberties have limits. So do market liberties.”

“By removing this book from its marketplaces and services, Amazon has unabashedly wielded its outsized market share to silence an important voice merely for the crime of violating woke groupthink,” they claimed.

They also sought “answers, along with supporting documentation” about how far the decision not to sell the one book went, “including communication with other technology companies and members of the Biden Administration,” their letter demanded, in an effort to “clarify the intentions and extent of the actions taken by Amazon to censor speech.”

Amazon’s Vice President of Public Policy Brian Huseman — not Bezos — responded to the Senators’ concerns on March 11, giving seven direct answers. In a letter published by the Wall Street Journal and confirmed by Amazon to Entertainment Weekly, Huseman said: “As to your specific question about When Harry Became Sally, we have chosen not to sell books that frame LGBTQ+ identity as a mental illness.”

‘We review both our Content Guidelines for Books and our approach to curating Amazon’s bookstores regularly, which can sometimes result in the removal of books that were previously available on our shelves,’ Huseman specified. “When we decide no longer to sell a book, we remove it from our store and we send an email to the author, publisher, or selling partner, informing them of the removal.”

“As a bookseller, we provide our customers with access to a variety of viewpoints, including books that some customers may find objectionable. That said, we reserve the right not to sell certain content. All retailers make decisions about what selection they choose to offer, as do we.”

A GLAAD spokesperson said in a statement to Entertainment Weekly that Anderson’s book is “dangerous and harmful to trans kids.” They asked readers to avoid “resources written by someone who has made their livelihood by publishing screeds against the trans community.”

“Amazon’s decision to stop selling books that falsely equate the two is a positive step in ending the misinformation campaign against LGBTQ people, especially trans youth, meant only to cause harm,” they concluded.