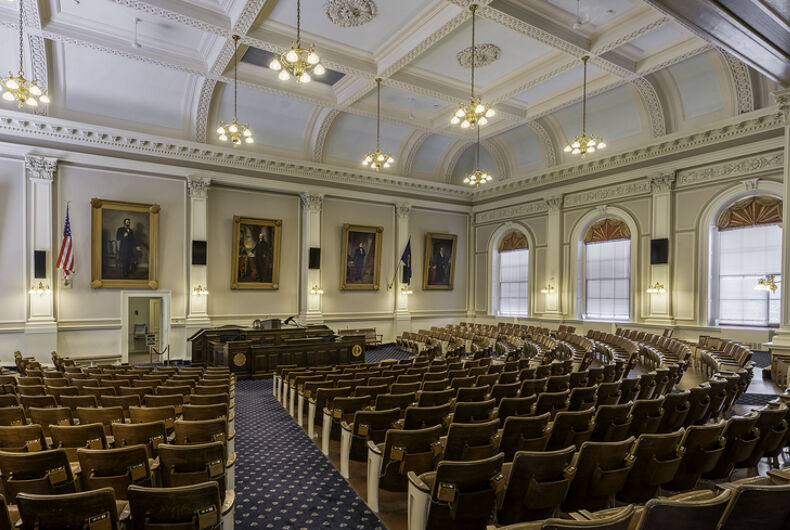 Rep's Hall, or House of Representatives chamber of the New Hampshire State House on July 28, 2015 in Concord, New HampshirePhoto: Shutterstock

New Hampshire Rep. Dick Marston (R) has apologized for his comments during a committee hearing early this month where he claimed that they were “sexual deviants.” Marston was raising an objection to a proposed law he claimed would give LGBTQ people “special privileges.”

He was asked about his language for referring to LGBTQ people and he responded by asking, “What is LGBT?” His Republican colleague ended the hearing.

Related: GOP lawmaker calls out fellow Republicans for being the “true definition of a BIGOT”

The 80-year-old third term state legislator admitted a few days later that he regrets his comments and acknowledged that they caused pain. Marston made a statement through the state house communications office, telling constituents that he will “continue to do everything I can to heal the pain I have caused.”

“All I ask is that you not give up on me because I give my word that I continue my progress and guide others to being better people,” he stated.

Noting that referring to LGBTQ people as “sexual deviants” was “accepted by society” when his generation was raised, in his time, he made clear that “just because I am in my 80s is no excuse to justify my comments.”

“It was never my intention to offend anyone. Due to my lack of education on this subject, I hurt a lot of people including members of the legislative body and members of the Criminal Justice and Public Safety Committee.”

The comments were made during debates of H.B. 238, a proposed law that would eliminate the gay or trans “panic” defense that allows defendants in murder or assault cases to claim they were so shocked or outraged when they learned the victim is gay or trans, they reacted violently.

Currently, 13 states and D.C. have banned the defense already. Several other states have had similar legislation under consideration in this year’s legislation, such as in Virginia where it passed. In New Hampshire, it has bipartisan support.

“We refer to people as gay or ‘LBGs’ or so on and so forth, and we want to carve them out and say they got special privileges,” Marston said in rebuttal to the bill during the hearing on March 1.

He was then interrupted by the chairman of the House Criminal Justice and Public Safety Committee.

“Rep. Marston, no member is able to speak of someone’s ‘deviant sexuality’ like that,” State Rep. Daryl Abbas (R) told Marston after gaveling him into silence.

“What is LGBT?” Marston shot back, prompting Abbas to adjourn the hearing as it devolved even further.

The committee was adjourned before any vote took place.

Marston issued his apology on March 5. On March 9, the bill stalled and was left in the committee, meaning it may or may not be picked up during the rest of the 2021-2022 legislation session.

“I share everyone’s disappointment that it took this unfortunate incident for me to improve myself,” he writes in statement. #NHPolitics pic.twitter.com/kfufH6D4T0

Gay couple beaten after kissing in a subway station by man yelling “Aren’t you ashamed?”