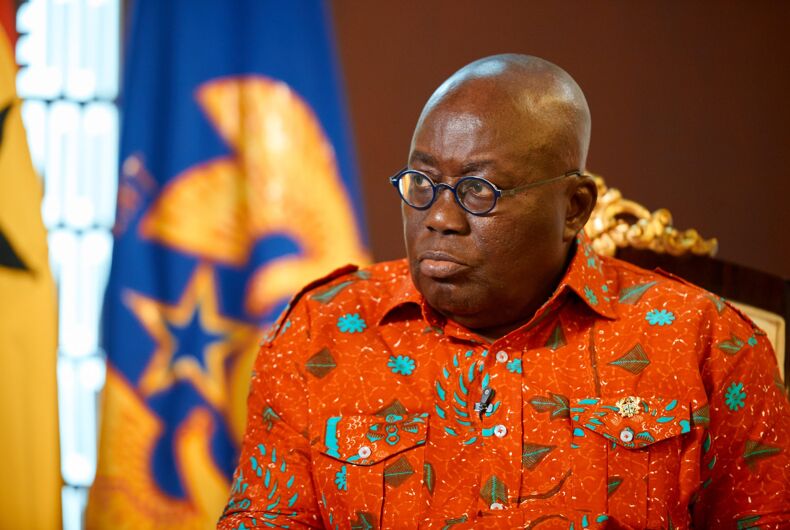 ACCRA,GHANA: The President of the Republic of Ghana Nana Akufo-Addo during an interview with Russian television, May 2, 2018Photo: Truba7113 / Shutterstock.com

The African nation Ghana may ban LGBTQ activism “in all its current and future forms” if members of parliament have their say. The country already outlaws homosexuality.

National security forces recently raided the offices of the country’s only LGBTQ advocacy organization and shut it down.

While Ghana has not “prosecuted anyone for same-sex relations in recent years,” LGBTQ people still face abuse and bigotry in the West African coast country. Human Rights Watch reports that the country has had “some reform”, but still lives under colonial-era legal infrastructure.

Pink News reports that MP Samuel Nartey George, one of the bill’s co-sponsors, said government figures must “uphold our traditions, culture and religious beliefs” by fighting back against “the growing advocacy for homosexual rights in Ghana.” George is referring to Christianity, an import into the country from European colonizers who instituted sodomy laws.

“We have taken a stance and announced our intention to present a private members bill to expressly criminalize and ban the advocacy and act of homosexuality in all its current and future forms,” he said. “The proposed bill would strengthen and augment existing legislation on the subject.”

“Amnesty is calling on authorities in Ghana to publicly acknowledge the legitimacy and important work of human rights defenders, including LGBT+ rights defenders, who have the right to carry out their lawful activities without any discrimination or fear of reprisals – as stated in the 1998 UN Declaration on Human Rights Defenders,” the human rights group said in a statement.

In a 2017 interview with Al-Jazeera, President Nana Akufo-Addo said he believed the country would eventually lift the criminal ban on homosexuality.

“These social, cultural issues, if you like, I don’t believe that in Ghana so far a sufficiently strong coalition has emerged, which is having that impact on public opinion that will say, ‘Change it. Let’s then have a new paradigm in Ghana,’” he said, when asked why homosexuality was still illegal.

“I think it is something that is bound to happen,” he added.

“Like elsewhere in the world, the activity of individuals and groups [can make it happen],” he continued, noting that he lived for a time in England as a boy when there were harsh laws against the LGBTQ community in that country. He gave credit to advocates and activists who worked to bring changes to the law and said he believed the same would occur in his own country.

“Mr. President, our plea is not one that seeks to institutionalize same-sex civil unions,” Alex Kofi Donkor, the executive director of LGBT+ Rights Ghana, wrote in a letter to Akufo-Addo. “Ours at this very point is to have some peace in our country and to feel safe. Ours is asking that the state protects us from harm, and that our sexual identities do not become weaponized as a tool of oppression in violating our rights as established under the constitution.”

“We ask that you remember your oath to serve all manner of persons, and to protect all persons under your charge.”

Bi women in relationships with lesbians more likely to be out, happier, & face more discrimination