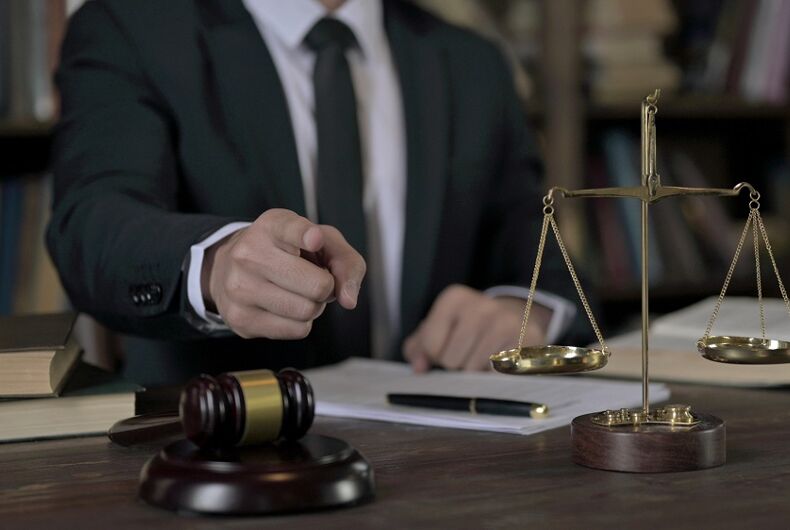 A panel of judges ruled that they will not refer to a non-binary defendant with “they” pronouns because they believe that their writing will suffer.

“Clarity suffers and confusion may follow when legal writing refers to a single individual as ‘they,’ especially when the materials advert to other actors who are naturally described as ‘they’ or ‘them’ in the traditional plural,” wrote Eighth Circuit Judge Steven M. Colloton for a unanimous panel.

Related: Lawyers wants a judge to recuse himself because he won’t refer to transgender women as “males”

The case involves the appeal of a non-binary person, Shawn Kelly Thomason, who had already pled guilty to a charge of stalking and was sentenced to 45 months in prison.

They appealed the sentence. One of the points they raised was how prosecutors referred to them with the wrong pronouns at hearings, despite having filed a request that “to the extent possible, gender neutral pronouns be used when referring to him.”

“He prefers use of the pronouns: ‘they,’ ‘them’ and ‘their,'” read a letter filed by Thomason’s attorney.

Later, Thomason said they objected to “all 134 instances of purposeful and deliberate misgendering of me.”

After Colloton went through several legal reasons why this isn’t grounds for appeal, he also excused the prosecution by saying that it’s hard for them to use different pronouns for Thomason after “eight months of habit of using male pronouns.”

Moreover, the judge pointed to Thomason’s lawyer’s use of “he” pronouns in making the request – which the attorney said were used to “for the sake of clarity,” the letter was a request to switch from “he” to “they” – to say that it proved that “clarity suffers” in general when using “they” pronouns.

Colloton wrote that even in this decision the court will continue to misgender Thomason, despite clearly knowing that Thomas uses “they” pronouns: “Consistent with the proceedings in the district court, and for the sake of clarity, we use masculine pronouns when referring to Thomason in this opinion.”

The judge’s arguments about clarity don’t appear to be coherent. It’s true that there could be multiple people or groups of people referred to as “they” in a text, but the same is true of “he” and “she” as well.

Joe Patrice at Above the Law argues that the judges could have thrown out Thomason’s prosecutorial misconduct claim “without resorting to demeaning the defendant’s new personal pronouns” by simply rejecting the argument and moving on.

“There’s no need to get any deeper into the issue than this,” he wrote.

On the question of why Judge Colloton refused to use Thomason’s correct pronouns even while he was fully aware of them in writing this decision, Patrice wrote: “There are just so many ways to arrange a coherent sentence. Wordsmithing is as much an art as a science and if Judge Colloton and the Eighth Circuit can’t hack it, maybe someone can set up some remedial writing exercises. [U.S. Supreme Court] Justice Gorsuch is capable of honoring pronouns, so the rest of the judiciary can catch up.”