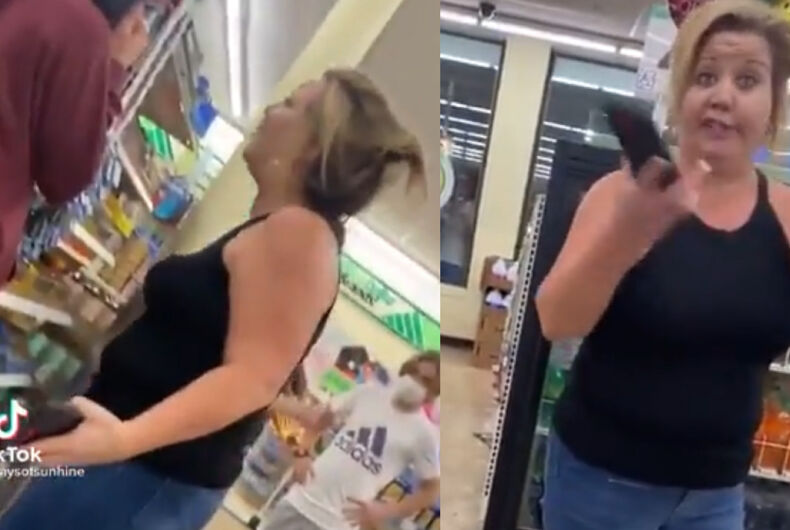 The Karen yelling at a teenage boy before turning to the woman recording the videoPhoto: Screenshot/Composite

A video of a Florida anti-masker throwing a homophobic fit over thea group of teens at a convenience store has begun making the rounds across the internet.

The woman gets into the face of one boy, demanding to know, “Are you a queer? What are you? You like it up the a–hole?”

The incident took place in a Dollar Tree in Jacksonville, Florida. Earning the nickname Dollar Tree Karen, the woman — who possibly has just not met teenagers before — tries to go back and forth, dropping insults and expletives in an effort to upset her younger counterparts.

After, the person recording the video asks her, “Are you okay?”

The woman tries to barb back, “You’re not okay!” claiming the person recording is “not a good goddamn friend” to one of the boys.

The video recorder asks if she’s going to her car right now, in fear that “You’re gonna hurt somebody if you go drive your car.” The Karen tries to retort back by offering to call the police and see what they think.

Unsurprisingly, she doesn’t upset the teens. She leaves them giggling while she storms toward the door, continuing to scream.

Exposing this hateful Karen and hopefully she gets the kind of attention she deserves. Jacksonville Florida. #karenbusters #karensoftiktok

In a series of other videos on TikTok, the person who recorded the video tries to explain that she and other patrons happened across the anti-masker who got into it with the teenagers, who she wasn’t with.

“My girlfriend and I were going to Dollar Tree, minding our own business,” she explains. “As we walk in, we see this woman screaming at these kids, calling them queers and other inappropriate comments.”

“They said they were being followed and harassed by this lady, we didn’t know much about the backstory until things calmed down.”

The Karen got so close that the woman thought she was “going to get physical.”

She’s saying “homophobic comments because that’s the only thing she can think of to say,” the woman explains.

What set the anti-masker off? She says that to her knowledge, it’s because she bought the “queer” looking boy with “no money” some candy. Bystanders got involved, and that only intensified the woman’s outrage even more.

She was “clearly under the influence of something,” the woman recording believes.

“She’s a grown woman,” she stressed, “whether this was ‘provoked’ or not, her behavior was gross and unacceptable. These are teenage boys.”

The TikTok video has reached over 275,000 likes and on Reddit, it has nearly 2,000 upvotes in various subreddit communities like r/FuckYouKaren and r/PublicFreakout.