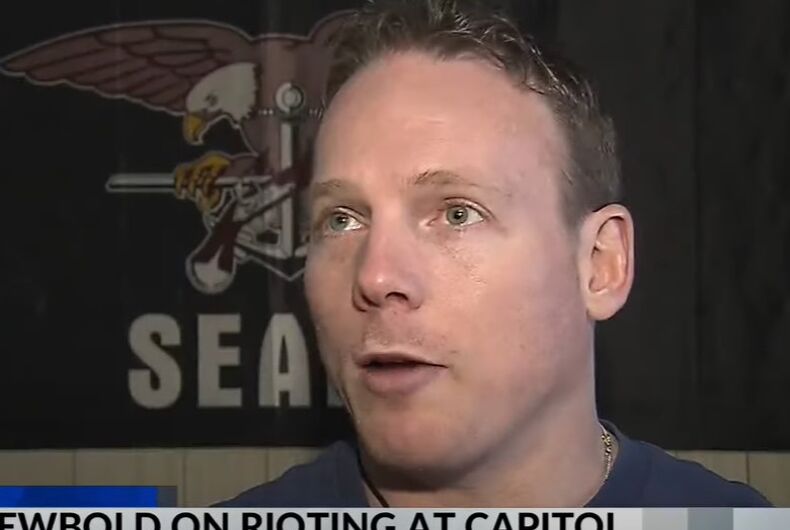 A man who participated in the MAGA insurrection at the Capitol on January 6 and called it “historic” and “necessary” says that he doesn’t want people who voted for Joe Biden and transgender people to come to his coffee shop.

Related: Gay Congressman was “ready to fight these MAGA assholes” during the Capitol riots

In addition to banning Biden supporters and people who don’t buy into conspiracy theories that the election was stolen, he also went after transgender people and people who support trans equality.

“If you feel that America is on the right track and there’s nothing wrong with gender neutral, don’t know which bathroom to use, use whichever bathroom you feel like during the day… don’t buy our coffee ’cause it’s not for you,” he said.

He also said that people who support kneeling as a form of protest against institutionalized racism and police brutality are banned as well.

Newbold was in D.C. on January 6 and attended the rally where Donald Trump spoke. He went with the crowd to the Capitol.

“I was there, I witnessed the patriotic angry Americans chanting, ‘USA, USA,’” he said in a video he posted online in January. “It was historic, it was necessary, and the reason I say I’m proud of Americans is because I wasn’t sure if we still had the spine anymore. Now I see that it exists.”

But he insists that he did not enter the Capitol or participate in the rioting.

In fact, the former Navy Seal insists that he “spent most of my time trying to de-escalate a largely volatile and potentially deadly situation” and that he “told rioters to stand down.” Even though he marched to the Capitol with the crowd, he claims that he only learned that rioters entered the Capitol as he left D.C.

Gay couple beaten after kissing in a subway station by man yelling “Aren’t you ashamed?”