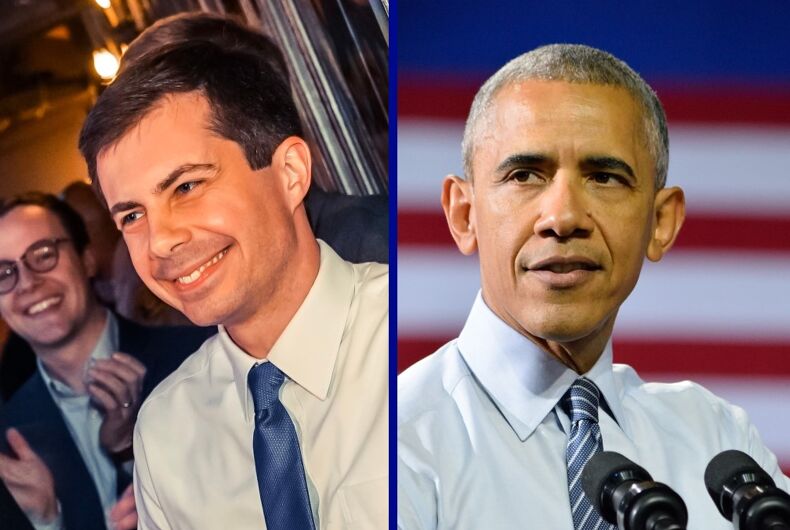 A new book on the 2020 campaign includes a passage that describes former President Barack Obama making fun of Secretary of Transportation Pete Buttigieg behind his back, calling him “gay and short.”

Lucky: How Joe Biden Barely Won the Presidency, by Hill journalist Amie Parnes and NBC’s Jonathan Allen, describes a meeting with corporate Black Democratic donors at Yves, a trendy restaurant in New York City, in October 2019, a few months away from the first state primaries.

The book says that Obama was asked by an executive if the candidates in the Democratic primary had come to him for advice.

“If Joe Biden, Elizabeth Warren, Pete Buttigieg, and Kamala Harris asked for advice, what would you tell them?” the executive asked.

“They all did!” responded Obama, according to the book.

The authors say that he mostly talked about Sen. Elizabeth Warren (D-MA) and effectively supported her presidential bid, even though he added that he wasn’t endorsing her.

“It was a 90 percent Warren sermon,” one of the donors later said.

Then he talked about then-Mayor Buttigieg. Obama said that he liked the mayor, but that he couldn’t win the election.

“He’s 38, but he looks 30,” Obama said, getting laughs from the audience. He made a joke about sharing traits with Pete, like big ears and “a funny name.”

“Only months earlier, Buttigieg had sat in Obama’s postpresidential office in Washington seeking counsel on how to maintain equanimity in the face of homophobia on the campaign trail,” Parnes and Allen wrote.

“Now, behind his back, Obama was riffing on him to some of the wealthiest Black men in America at a time when Buttigieg had been dubbed ‘Mayo Pete’ by critics who believed he couldn’t connect with African American voters.”

At the end of the dinner, someone told Obama that he forgot to talk about Biden.

“His support for Biden was tepid at best,” a donor said.