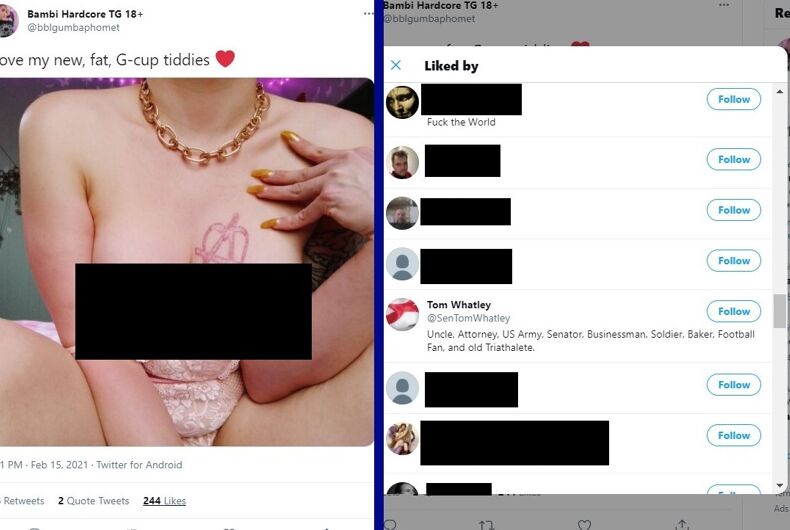 “I love my new, fat, G-cup tiddies,” their tweet said, with a picture of their breasts. The tweet was posted on February 15, 2021, it appears in Whatley’s “Likes” feed, and his work-associated account is listed in the tweets’ likes.

This may surprise some of his constituents, considering what he was doing at work just last week. Whatley voted in favor of S.B. 10 in the state senate, a bill that would criminalize doctors who provide gender-affirming health care to young people in accordance with established transgender standards of care. The bill would be so draconian that a doctor who prescribes puberty blockers could get 10 years in jail for doing their job.

According to the AP, the bill would even cover talk therapy for transgender youth.

“We don’t want them affirming that, ‘Hey yeah, you’re right, you should be a boy if you are a born a female,'” said the bill’s sponsor, state Sen. Shay Shelnutt (R).

Whatley offered an amendment to exempt counselors but it was rejected. He still voted in favor of the bill.

This isn’t the first time an opponent of transgender rights has been caught looking at transgender adult content. In 2018, the anti-LGBTQ host of Info Wars, Alex Jones, was caught on camera with a video on his phone that had “Naughty tbabe” in the title.

LGBTQ Nation asked Whatley why he liked that tweet. As of publication, he has not responded, but he has un-liked the tweet on Twitter. This news site also requested comment from the model in the picture. This article will be updated if either responds.