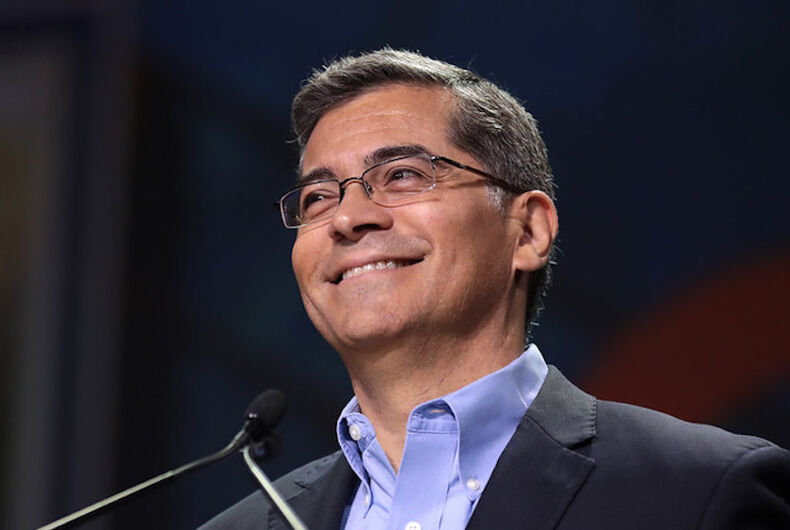 Most of the right was never going to be happy with anyone Joe Biden chose for his Cabinet, but since the Democrats hold a bare majority in the Senate, most nominees are going to be approved. But conservatives — especially religious conservatives — have drawn a line in the sand for one person whose nomination they wish to derail: Secretary of Health and Human Services (HHS) nominee Xavier Becerra.

Becerra, the attorney general for California, has been singled out by Republicans and their allies as the one Biden pick that they believe they can stop for being confirmed. While they cite a variety of reasons why, the main drivers for their campaign against Becerra is his support for LGBTQ rights and reproductive rights.

Related: Conservative Catholics are now claiming that Joe Biden is “too obsessed” with LGBTQ people

By contrast, Biden’s one gay nominee, Pete Buttigieg, sailed through the confirmation process. Even such hardcore conservatives as Sen. Mike Lee (R-UT) voted in favor of his nomination.

In large part, Buttigieg’s smooth approval was a result of the department he’s charged with heading being the Department of Transportation. There aren’t a lot of high-profile cultural war issues at stake in that department.

That is not the case with Becerra. Not only will he be heading a department that religious conservatives dominated for the past four years, he has been involved in multiple legal battles with the religious right.

During the Trump era, HHS became one of the key departments to carry out the right’s anti-LGBTQ agenda. Some of the actions undertaken by the agency under his direction:

Letting go of that kind of power is tough on the right, but for religious conservatives, Becerra’s selection is not just about policy. It’s personal.

Becerra was the key litigant in a battle about Obamacare’s coverage for reproductive services. The case involved an order of nuns, Little Sisters of the Poor, that argued the required coverage violated their religious beliefs. The order had won multiple cases, but new rules from the Trump administration led to new litigation. Becerra sued the order, ultimately losing.

In fact, as a columnist for the National Catholic Reporter put it, the nuns “are neither little, nor poor. They are an avatar for the wealthy and powerful Becket Fund for Religious Liberty, a well-oiled legal organization.”

But the lawsuit allows the religious right to paint Becerra — himself a Catholic — as anti-Catholic, attacking a group of poor nuns. Brian Burch, the President of the conservative online group CatholicVote.org, deemed him “a culture warrior best known for ruthless prosecution of nuns and trying to keep churches closed.”

Tony Perkins, head of the hate group Family Research Council, blasted Becerra for his support for reproductive rights and the LGBTQ community, attempting to denounce him as an “extreme pro-abortion zealot” and “a crusader for the LGBTQ agenda.”

“He voted against the 1996 Defense of Marriage Act, which guaranteed states the right to define marriage as they saw fit (overturned by President Obama and his congressional allies),” Perkins fumed, “and in one of his first acts as California’s AG, he sued one California county for its ‘discriminatory’ bathroom policy that provides students who identify as transgender with their own restrooms, insisting that these students should be able to use the men’s and women’s rooms of their choice.”

I’ve spent my career fighting for quality, affordable healthcare. As HHS Secretary, I pledge to continue that fight. https://t.co/iuMycLqgxt

Attacking Becerra is also a good way for the right to raise money. Groups attacking him are spending hundreds of thousands of dollars on ads and are firing up the outrage machine to generate what they term grassroots opposition — which often has a fundraising letter attached to it.

Whether or not the religious right can stop Becerra’s nomination is unclear. Republican Senators have been lining up against him, pulling out all the rhetorical stops. Sen. James Lankford (R-OK) accused Becerra of “encouraging the death of children.”

So far, however, Becerra’s nomination remains on track, despite GOP efforts to slow it down. If Becerra is approved to head the agency, you can bet that the religious right will keep up the attacks.

They will not drastically change the Biden administration’s policy, but it will help with their own fundraising.

A trans woman & essential worker moved mid-pandemic for work. She was beaten to death.